A University of Maryland poll finds that Americans are also split on whether Israelis and Palestinians were responsible. 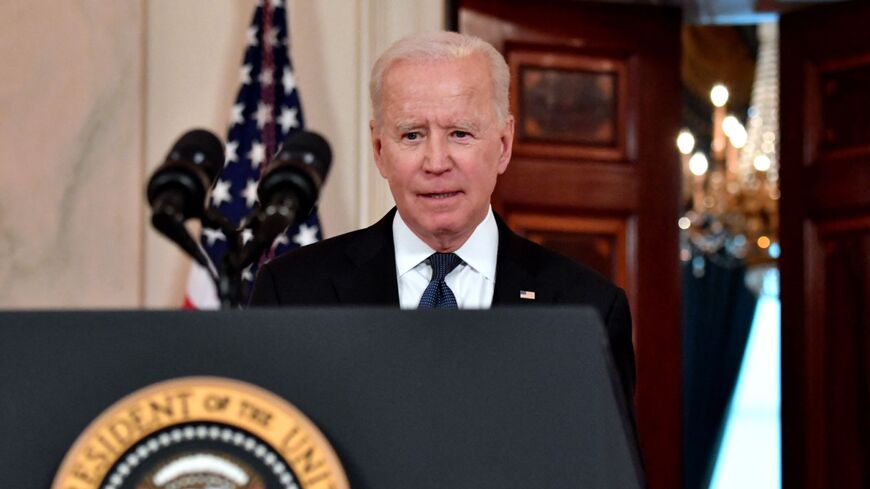 US President Joe Biden arrives to deliver remarks on the Middle East in Cross Hall of the White House, in Washington, on May 20, 2021. Israel and the two main Palestinian armed groups in Gaza, Hamas and the Islamic Jihad, announced a cease-fire earlier that day aimed at ending the most devastating conflict between them in seven years. - NICHOLAS KAMM/AFP via Getty Images

A slight majority of Americans disapproved of President Joe Biden’s handling of the May war in Gaza, according to a University of Maryland poll published Thursday. The findings of the “Critical Issues Poll” were based on a survey conducted in June and July.

Pollsters asked Americans about Biden’s efforts to end the fighting, leading with a reference to the “high level of civilian casualties and destruction.” Biden urged de-escalation throughout the conflict, but refrained from vocal criticism of Israel to the chagrin of progressives in the Democratic Party. The survey found that 52.7% somewhat or highly disapproved of Biden’s handling of the war. But while 80.1% of Republicans disapproved of the president's actions, 72.3% of Democrats approved of them.

In the May war between Israel and Hamas in the Gaza Strip, tensions in Jerusalem resulted in Palestinian rocket fire into Israel and Israeli bombing of Gaza. The United Nations concluded 256 people died in Gaza during the fighting, including 128 civilians. Twelve people in Israel were also killed. There was also significant property destruction in Gaza as a result of the airstrikes, alongside damage from rocket fire in Israel as well.

The Israeli-Palestinian conflict is increasingly divisive in the United States. There were clashes between pro-Israel and pro-Palestinian protesters in New York City during the war, in addition to attacks on Jews in Los Angeles.

The poll’s findings are consistent with shifts among Democrats toward more pro-Palestinian positions. Some members of Congress solely blamed Israel for the conflict. Democratic Rep. Alexandria Ocasio-Cortez of New York accused Israel of “inciting violence” during the war, for example.