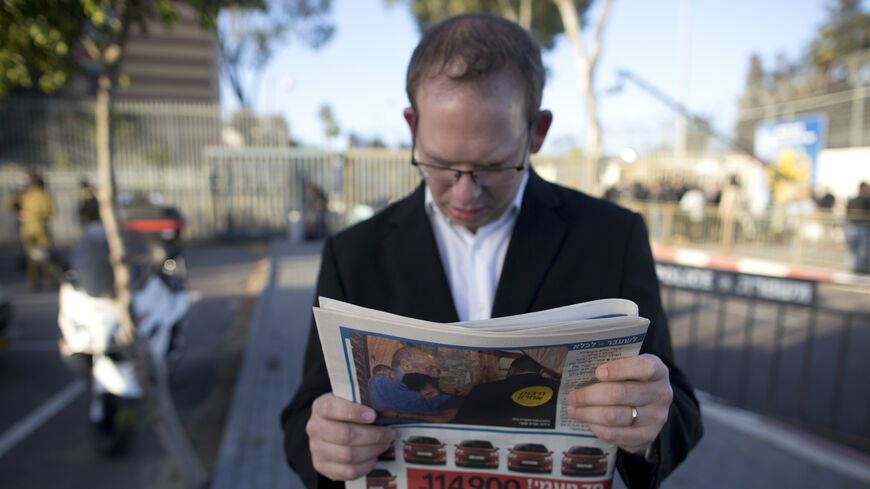 A member of the media reads a newspaper at the entrance to Maasiyahu Prison before the arrival of former Israeli Prime Minister Ehud Olmert on Feb. 15, 2016 in Ramle, Israel. - Lior Mizrahi/Getty Images

Israeli politics never ceases to amaze with its capacity for chaos. The latest saga pits two former prime ministers against each other in a court of law. Just prior to being ousted from office in June, former Prime Minister Benjamin Netanyahu and his family filed suit against former Prime Minister Ehud Olmert for claiming in a series of interviews that they were “mentally ill, requiring psychiatric treatment.” Speaking to Democrat TV, Olmert said, “What can’t be fixed is the mental illness of the prime minister and his wife and son. … Under regular circumstances any psychiatrist with a healthy conscience … would tell you that they need to be hospitalized. They are sick people.”

A court also ordered son Yair Netanyahu to pay nearly 300,000 shekels ($87,000) in damages to a journalist, Avi Alkalay, who had sued him for defamation of character. The court rejected their appeal against the judgment just this week, but the family was undeterred. The defamation suit against Olmert alleges that Olmert embarked on “obsessive attempts to harm the plaintiffs and to trample their reputation in public out of sheer enjoyment and deep frustration, malice and wickedness.” When the family ignored him, the suit alleges, Olmert took up even harsher invectives against them, “crossing every red line possible."

"His words are not true. They are outrageous, ugly lies,” the lawsuit alleges, calling Olmert’s remarks “potentially destructive” and demanding damages of 837,000 shekels ($256,000), a high sum for an Israeli libel case.

Anyone who thought the Netanyahu suit would deter Olmert was quickly disabused of the idea. This week, the former prime minister, who served a 19-month prison term in 2016-2017 after being indicted for bribery, fraud and breach of trust, filed his defense statement with the court. Not only did he not retract his claims about the Netanyahus, he is fanning the flames. Israeli law protects statements made during judicial procedures and Olmert took full advantage of this leeway.

Olmert warned that if the Netanyahu lawsuit goes to trial, he would demand that the three plaintiffs — Netanyahu, his wife Sara and their son Yair — waive their right to medical confidentiality and share all the information in their possession regarding their mental health, including medications and hospitalizations. He added that he would demand an independent psychiatric evaluation of all three by an expert of his choosing.

In his court filing, Olmert claimed that the evaluation might invoke terms such as “Napoleon complex,” “delusions of grandeur,” “paranoia,” “megalomania,” “narcissism,” “schizophrenia,” “obsessive compulsive disorder” and “personality disorder.” Olmert added other diagnoses that could arise from such an evaluation, including “shared psychosis,” “sociopathy,” “schizoid,” “generalized anxiety disorder,” “attacks of rage” and “addiction.”

The mudslinging between the former prime ministers, two of the three still living, has become the talk of the day. In his defense statement, Olmert argued that this was not the first time that speculation had arisen in the media about the Netanyahu family's mental states. In recent years, Sara was the main target of such rumors. According to various testimonies, her former attorney, the late Yaakov Weinroth, reportedly hinted to former Attorney General Yehuda Weinstein that she could not be tried or held legally responsible for her actions, such as suspected irregularities at the official residence and the family’s private home. The Netanyahu family has consistently denied such claims, which may now have to withstand legal scrutiny and suffer public glee.

Psychiatrist Ilan Rabinowitz, known in Israel for advising celebrities, told Al-Monitor this week that Netanyahu was undoubtedly a sane, talented and balanced man, and as such not in need of psychiatric scrutiny. “As for his wife and their son,” he added, “I cannot commit myself.” He said that had he been asked by Netanyahu for his opinion, he would have recommended to drop the lawsuit.

Rabinowitz' hint that the lawsuit could be far more damaging to the family than beneficial stems from the understanding that a court hearing would force the family to reveal sensitive information. Since Netanyahu first emerged on the political stage in the 1990s, the family has been the subject of harsh criticism and endless scandals over its conduct, especially Sara, who was repeatedly recorded making controversial and abrasive remarks.

This criticism has intensified in recent years, highlighting allegations that Netanyahu is unable to stand up to the manipulations of his wife and son Yair at home, who are de facto running the affairs of state. These claims have been denied numerous times, but past associates say there is a grain of truth to them.

“Does Netanyahu really want all of this to come out in court and for Olmert to start summoning witnesses to prove that the family is mentally unbalanced?” one of them wondered in an interview with Al-Monitor on condition of anonymity. “I am not sure Netanyahu himself was the one who pushed for this libel suit to be submitted. I hope he understands at some point that this would be shooting themselves in the foot and that even if they ultimately win, the public debate could drag on for years and cause them unfathomable harm.”