Netanyahu's popularity undamaged by accusations against his wife

Over the years, and again this week, Prime Minister Benjamin Netanyahu has been blaming the media for going after his wife in order to hurt him. 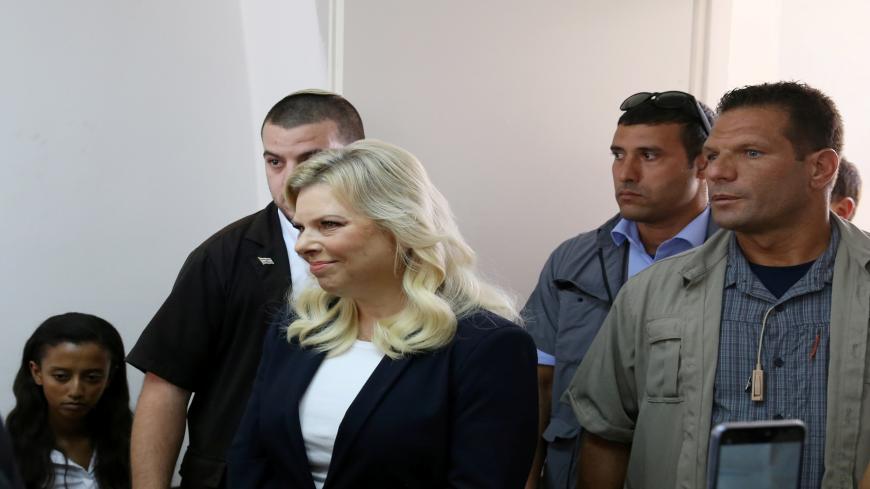 Sara Netanyahu arrives at a court hearing in the fraud trial against her, at the Magistrate Court in Jerusalem, Oct. 7, 2018. - Amit Shabi/Yedioth Ahronoth/Pool via REUTERS

Prime Minister Benjamin Netanyahu’s wife, Sara Netanyahu, filed a civil suit against Sylvie Genesia, a former housekeeper at the prime minister’s residence. She is demanding 200,000 Israeli shekels ($58,000) for invasion of privacy, violation of contract and slander. The suit was filed just two days, on June 16, after the media released a series of embarrassing recordings in which Genesia and another employee at Netanyahu's residence discuss the disturbing behavior of Sara and her son Yair.

Genesia is yet another addition to a seemingly endless list of former employees at the prime minister’s residence who engaged in or are currently engaged in highly publicized legal disputes with Sara. Though they claim that she humiliated and abused them, they have also shared some shocking descriptions of what really goes on at the residence. Stories such as these surrounding the Netanyahus have been on the public’s radar in Israel since Netanyahu's first term in office (1996-1999). In 1997, Tanya Shaw, the nanny of his two sons who were three and five at the time, sued Sara for her humiliating attitude and unlawful termination. The stories have been coming nonstop since then, reaching record levels in the last few years. Sara is in and out of court, and in many cases, has filed countersuits. Most of these employees describe the prime minister himself as treating them well. Sometimes, they say, he will even calm his wife down, when she goes off on a rant.

The most recent scandal featured conversations that Genesia recorded. On June 14, Channel 13 released tapes that consisted of conversations between Genesia and another employee at the official residence. In these recordings, the two women can be heard complaining about unusual events and problematic treatment by both Sara and Yair. Sara and her son are called all sorts of harsh names on the tapes. “She’s really angry now. She’s just evil. That woman is evil and unbalanced. … Every day, she has a hissy fit,” Genesia complained. Later in the recording, the other employee describes how she threw out some of the prime minister’s shirts, because they got ruined in the wash, and that she was worried about what Sara would do to her. As for Yair, she said, “He used to put his socks in the refrigerator, and I would get yelled at for it.”

The uproar in the media was inevitable. Netanyahu took time off from dealing with annexation and the coronavirus crisis to release a video clip ridiculing the report and the journalist who covered it, while supporting his wife. After so many lawsuits and legal battles, and after all the disturbing stories about Sara, Netanyahu is not concerned about the electoral damage that this could cause him. On the contrary, Genesia’s story was still in the headlines when another poll predicted that Netanyahu would win an election if it was held today. With Netanyahu at the helm, the Likud party would soar to 41 seats.

While Netanyahu was busy with his video clip, the family’s lawyers went to the media to complain that this was all part of a coordinated campaign by the housekeeper and her lawyer. The lawyers said that the secret recordings were edited, that they had been recorded over months and that the housekeeper was a “plant,” sent to the prime minister’s residence to harm him and his family.

But that was not enough for Sara. She sued Genesia, who has since been appearing frequently on news shows, together with her attorney. Genesia claims that the lawsuit is intended to silence her, and that she is launching a GoFundMe crowdfunding campaign to cover her steep legal expenses. In one interview she said, “They may want to silence me, but I only want to tell the truth about what I went through.” She continued, “I don’t want money. I just want the truth to come to light and for people to know about all the abuse I went through there. I want them to know what I went through day and night.”

In this case, too, Sara is planning to wage all-out war to prove that she is actually the victim. In some of the cases over the years, lawyers attempted to convince her to reach a compromise with the plaintiffs, but she always preferred to use legal means to confront the allegations.

That's what happened in 2019, at the height of the second election campaign. Sara testified in court in a lawsuit brought against her by another former housekeeper — Shira Raban — who worked at the prime minister’s residence for just one month in 2017. She charged Sara with abusive behavior, claiming that in one case, she almost beat her.

Upon returning to court, Sara released a video she shot, which appeared across the various social media platforms. In it, she claimed that she was the victim of lies and abuse by employees, who want to extort money from the state and become famous at her expense. In other words, she is the actual victim here. “I just returned from a truly delusional hearing. I have been turned into a reality show, or the ‘beat up Sara Netanyahu’ show,” she said.

In a way, Sara Netanyahu is right. Reports about her are a hot news item, that pique interest and fire up the imagination. Her personality evokes intense emotional responses anyway, and she has been turned into a grotesque caricature on TV satires.

"Sara stories" have become an inseparable part of the last election campaigns. But while descriptions of what allegedly took place at the prime minister’s residence became increasingly disturbing, they did not affect the prime minister’s popularity — the same way the criminal trial for bribery that Netanyahu is currently facing failed to hurt him politically. More so, it actually strengthened his grip on the right.

Netanyahu’s ability to etch deep into the public’s conscious that he is the real victim, who is being persecuted by the media, the left and the courts, produces electoral energy. The “persecution” of Sara fits well into this narrative. Netanyahu doesn’t bother to get into the facts or nuances of each of the incidents involving his wife. He rejects them out of hand with total derision, claiming that she is paying the price for attempts to harm him and the political right.

As one Likud minister told Al-Monitor on condition of anonymity, the explanation for this lies with the idea that Netanyahu has managed to convince the public that the media is going after Sara in order to hurt him. The minister added, “Even when wild behavior by Sara is revealed in court, Likud voters are willing to forgive her. Some of them believe that the complaints are just part of a larger conspiracy, while others think that they are probably true, but that it doesn’t really matter — at least to them.”