The latest scandal concerning the behavior of Sara Netanyahu toward the premier's residence manager has not turned into a significant public debate, but generated caricatures and satirical comments on social networks. 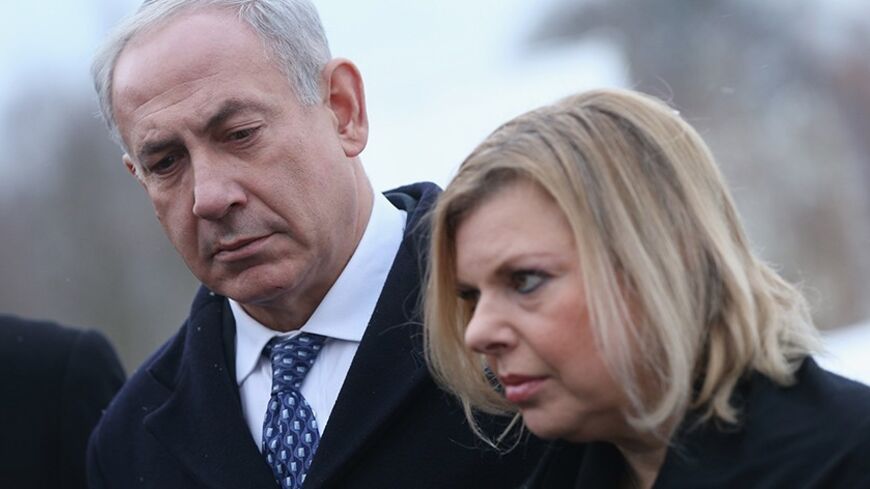 Like a bad custom that has turned into a habit, the Israeli public reacted with near indifference to the latest scandal to emerge from the prime minister’s residence. The Netanyahu family’s house manager has filed a personal lawsuit against the prime minister and his wife, claiming abusive and degrading treatment and mental anguish.

The accusations have provided a peek into the goings-on in the house on Jerusalem’s Balfour Street, from where the affairs of one of the most threatened countries in the world are run. And although this lawsuit is more bizarre and worrying than others filed against the family, Israelis don’t seem to be overly excited by the new affair, as though saying, “Nothing new here.”

Three days after the grave and embarrassing lawsuit was filed by the former house manager, Manny Naftali, on March 19 against Benjamin and Sara Netanyahu, the public debate hasn’t managed to rise above the level of gossip, voyeurism, humor and satire. This reflects the indifference of the public and the political arena, which no longer get excited about another employee of the couple who describes the wife of the prime minister as a vulgar, capricious and domineering woman who abuses her employees until they break down, resign or are fired. Most of them disappear from the scene, few decide to conduct a legal battle.

In the case of Naftali, his past as a combat soldier did not help him survive the demanding position in the Netanyahu home and he decided to leave after what appear to be 20 nightmarish months, according to the lawsuit. In recent months, Naftali conducted a mediation attempt with the Netanyahus, which failed. If the couple had been more generous with his severance pay, it’s safe to assume that the new Sara stories would have remained buried.

Based on previous lawsuits against the Netanyahu family, it is probable that the affair of the house manager will also be settled in a financial compromise, details of which will not be revealed. Israelis will have to make do with the following picture, which emerges from the lawsuit: After an exhausting day at work, the prime minister is awakened at 3 a.m. by his wife’s loud shouting at the house manager for buying milk in a plastic bag rather than in a carton. Netanyahu then tells the house manager to “do everything that Mrs. Netanyahu asks, so that she calms down.”

Of all the situations described in the lawsuit brought by Manny Naftali, the political commentators have focused on the milk story. Many other bizarre and worrying stories have emerged about Sara Netanyahu’s behavior in previous affairs, including the lawsuit brought by former housekeeper Lilian Peretz. But the fuss that, according to Naftali, cut short the prime minister’s sleep, could demonstrate how his wife’s behavior goes beyond mere gossip about capricious tendencies and an ongoing flaw in her attitude toward employees. It has a deleterious effect on Netanyahu's own functioning.

In another incident mentioned in the lawsuit, an enraged Sara Netanyahu threw a flower vase on the floor, claiming the blooms were “not fresh” and that “such a thing could not have happened at the Elysee Palace.” But unfortunately, these two stories became almost at once grist for satire or for viral posts on social media (“The coffee isn’t tasty? At the Elysee, this couldn’t have happened,” etc.). Few discussions dealt seriously with the substance of the affair, mostly because the recurring pattern has created a degree of apathy among the public and in the media toward the new-old claims. Netanyahu was recently elected to a third term in office, when everyone already knew about the profligate waste of public funds and the disturbing behavior in his household.

Even Israeli daily Yedioth Ahronoth, known as particularly hostile to the prime minister, opted for low-key coverage of the lawsuit this time. The same fatigue was evident in the weekend political columns, as well. Almost every one the pundits asked why no one in Netanyahu’s inner circle had yet revealed once and for all how Sara Netanyahu’s behavior is harmful to the conduct of the affairs of state. But in the absence of new information beyond what is already known, the discourse did not take off.

The indifference was also felt in Netanyahu’s near and distant political surroundings, given that the Sara stories have long been an open secret. This is certainly true for anyone who has been in close proximity to the couple and got to know up-close or experience personally the whims of the prime minister’s wife, and to see her husband giving in to them. Even among Netanyahu’s political rivals, who could have used the affair to attack him, the discourse remains mostly gossipy and is not being leveraged into serious criticism.

The reaction of the Netanyahu couple to the lawsuit is also part of the same feeling of deja vu: Once again, representatives for the family are sent out to accuse the claimant of greed and of attempting to blackmail them with the use of inside information. This is a regular tactic that has proven successful in the past.

When the prime minister finds time in the coming days to do some damage assessment, perhaps by polling, too, he will likely discover that he hasn’t been personally harmed in any real way. There is still no leadership alternative to Benjamin Netanyahu in Israeli politics. He will most likely find out that he still gets the highest rating in terms of his suitability to the premiership, compared to Justice Minister Tzipi Livni, Foreign Minister Avigdor Liberman, Defense Minister Moshe Ya’alon, Finance Minister Yair Lapid and Labor Party Chairman Isaac Herzog. In the absence of a true contender against Netanyahu for leadership of the state, the revelations in the various affairs are not expected to affect his chances for re-election.