Why Netanyahu blames the left

With his wife being questioned by the police, Israeli Prime Minister Benjamin Netanyahu multiplies his attacks against the media and the left, blaming them for persecuting his family. 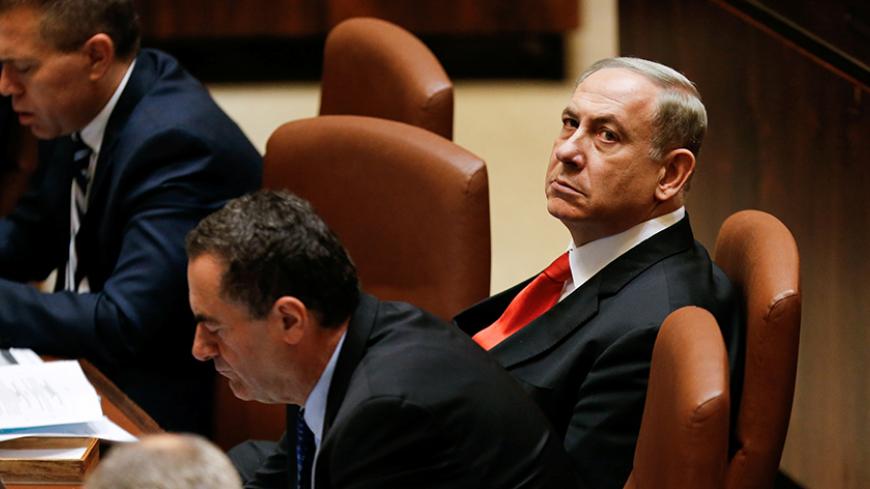 Israeli Prime Minister Benjamin Netanyahu posted to Facebook late in the evening of Nov. 30. At first, Netanyahu’s comments seemed to lack any context. He used more than 500 words just to say that the media and the left were persecuting him and his family “after failing to convince the people of Israel that their way was the right way by defeating us in the ballot box.”

Whenever he faces a political crisis, Netanyahu has a habit of delivering speeches or writing social media posts along these same lines. In them, he attempts to portray the media and the left as a single enemy that uses illegitimate means to bring him down. In most cases, this is a response to various personal scandals and police investigations against him. This time, however, when he went on the attack, there was no obvious reason for it.

The explanation only came the following afternoon, when it was learned that his wife, Sara, was summoned for another criminal investigation concerning the misuse of public funds, a scandal surrounding the prime minister’s residence. The basis for this latest interrogation was apparently new information obtained by her interrogators.

Netanyahu knew by Nov. 30 that his wife would be spending many long hours in the interrogation room, so he decided to deliver a pre-emptive strike. He wanted to get the first shot in by telling the public that this was yet another case of political persecution waged against him by the left.

Anyone familiar with the Netanyahu family’s dynamics in times like this — and there were plenty of times like this in the past — can imagine what took place before the prime minister’s wife set off to the offices of the Lahav 433 unit — the Israeli equivalent of the FBI. Sara Netanyahu exudes a sense of victimhood over the injustice she suffers, convinced that she and her children are being persecuted by the media. All the while, as she has hinted in the past, the wives and children of other public figures are protected. She has a particular obsession with the family of former Prime Minister Ehud Olmert, who is serving time in Maasiyahu prison. This is the mood that sets Netanyahu into action and dictates the kind of language he will use in his posts. In the Facebook era, he no longer needs anyone to serve as a middleman between him and the public.

This time, Netanyahu laid out all his core beliefs in an organized manner. He claimed that key figures in the media realized that they could not topple him in elections, which is why they decided to use the press to wage a personal war of annihilation against him and his family. As he explained it, “Why are they doing this? Because the people of Israel have woken up from the illusions of the left.” Later in the post he described the wave of terrorist attacks in the 1990s as the consequence of the Oslo Accord. He called former Prime Minister Ehud Barak’s concessions at the 2000 Camp David negotiations with the Palestinians as the cause of the second intifada (2000-2005) and the 2005 disengagement from Gaza, the reason that Hamas came to power in the Gaza Strip.

What does all this have to do with Sara and the children? As Netanyahu has it, once the left and the media realized they could not convince the people of their worldview, they shifted to personal attacks against him and his family. He accused the media of a double standard, claiming that they did not properly investigate the criminal scandals of former Prime Minister Ariel Sharon, just so he could move ahead with the disengagement from Gaza. Then he continued, “Through a campaign of daily brainwashing and the character assassination of me and my family, they hope to distract the public from the core issues underlying the political debate in Israel.”

As aforementioned, posts like this are usually reserved for particularly difficult times. When it was learned that Sara Netanyahu spent 11 hours in interrogation, Netanyahu’s decision to launch a comprehensive, populist attack against the left made sense. He wanted to divert attention from the criminal investigation of his wife.

All in all, this was a bad week for Netanyahu. There was a feeling that all of the scandals and affairs were tightening around him. His former Chief of Staff Gil Sheffer was interrogated for sexual assault. About two weeks earlier, Sheffer had been interrogated yet again for the scandal surrounding the prime minister’s residence. Sheffer and the Netanyahu family are no longer close, to put it mildly, and Netanyahu and his wife are worried that the police are trying to turn him into a state witness against them. Given all of Sheffer’s entanglements, the interrogation of Sara Netanyahu and the relatively new submarine scandal (where the press accused Netanyahu that he was motivated by personal reasons to close the submarine purchase deal), it feels as if the ground is beginning to slip out from beneath the Netanyahu family.

Netanyahu has never been known for subtlety in the practical application of his politics. Fanning the flames of hate against the left is a basic component of his strategy, and it has been for a very long time. There are countless examples of this, one of the most famous dating back to his first term as prime minister, when he famously whispered into the ear of the aging mystic Rabbi Kaduri that “the left had forgotten what it means to be Jewish. They think that they can trust our security in the hands of the Arabs.” Back then, in 1997, his house was on fire with all sorts of investigations and political problems, which ultimately led to the collapse of his government in 1999.

In this era of social networks, Netanyahu has lost many of his inhibitions. In the past, he was less personal and more ideological in his attacks against the left. Since then, however, he has begun to complain about a conspiracy between the media and the political left intended to remove him from power. In his most recent responses to the media, he has already begun describing senior journalists as members of the radical left. The prime minister can then use this theory to explain everything and ward off any claims against him. Based on various WhatsApp groups for Likud supporters and his own in-depth polling, this strategy is succeeding beyond expectations. Many Likud supporters also believe the media and the left discriminate against them, too, so they identify with Netanyahu. They are prepared to forgive him for everything and to help him in any way they can.

Netanyahu’s attacks on the left (in the last 2015 election campaign, he took part in a decision to post a video clip accusing the left of bringing the Islamic State to Israel) are more than just a tool for political survival. They have deep roots in his worldview, which is why they sound so authentic. Netanyahu is the son of professor Benzion Netanyahu, who believed until his very last day that the Israeli left suppressed him and failed to recognize his achievements as a historian, all because he identified with the Revisionist Zionist camp. The prime minister and even his children believe that the Mapai Party — the forerunner of today’s Labor Party — controlled the universities and blocked the father’s promotion, forcing him to pursue his academic career in the United States.

But there are differences between the father and the son. The two significant differences are that the older Netanyahu attacked the left over its ideology and values, whereas the younger Netanyahu now uses incitement against the left to defend himself against criminal investigations. Furthermore, unlike the era of the Mapai Party, when the father was indeed part of the opposition camp, the Likud has controlled the country for years, while the left is far from the center of power and the decision-making process.