Yair Netanyahu, the alter ego of his father, says bluntly out loud everything his father would like to say but cannot against the left, the media and Arabs. 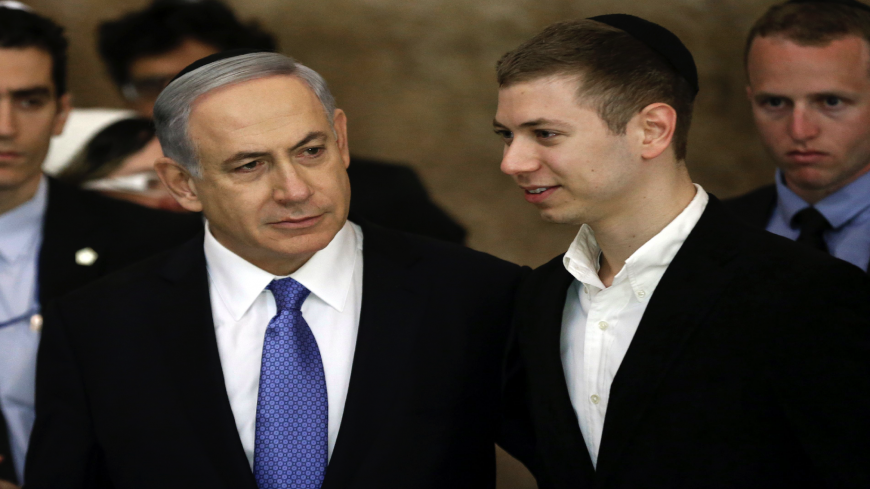 This week saw the launch of a new podcast by none other than Prime Minister Benjamin Netanyahu’s son Yair. The eponymously named “The Yair Netanyahu Show” is a chance for Netanyahu Jr. to expand his Israeli and international media presence. It goes far beyond his expansive, provocative and uninhibited social media presence, which had been his trademark until as recently as last year.

Over the last few months, the younger Netanyahu has been a permanent fixture on the panels of news shows on Channel 20, which is closely identified with his father. He also has a weekly radio show on right-wing Galei Yisrael radio. In both cases, these are niche channels with low ratings. But he also has a huge following on various social media platforms, particularly Twitter, where he has over 100,000 followers. This is where he has his chance to shout his messages to the world.

What are his messages? He is a relentless advocate of an ultra-right-wing, conservative worldview, which considers the progressive left to be a threat to international stability. Like his father, he is a zealous believer in the principles of a free market. He has nothing but contempt for socialism and considers the mainstream media as little more than an arm of an allegedly vindictive left, which (supposedly) persecutes his father and the rest of his family in an effort to topple right-wing rule in Israel.

Yair can allow himself to say the kinds of things that his father would have to tone down. Whereas Netanyahu Sr. tones his message, Yair can lash out, insulting and ridiculing journalists and politicians who oppose his father. Most of all, he can do it without any filters, which is why so many have come to see him as the alter ego of his father. Whenever he crosses the line — and he does — Prime Minister Netanyahu’s office simply releases a statement that Yair is an independent adult with a right to voice his own opinions.

This week, Yair, 29, recast himself in a new podcast, which looks like it was shot in his bedroom in the prime minister’s official residence. At the start of his first episode, he introduced the format for his hour-long show. In it, he plans to host someone from Israel or overseas to discuss current events and various ideas near and dear to him. It is yet one more step in his transition into a one-man media organization, an unofficial organ of his father’s campaign, unencumbered by the norms of polite politics. It will surely become an effective tool in the coming election, which observers believe will take place in the next few months.

In his first episode, Yair spent an hour chatting with Eduardo Bolsonaro, son of Brazilian President Jair Bolsonaro, one of the world leaders closest to Prime Minister Netanyahu and his family. Bolsonaro is known for his right-wing, conservative worldview and his pro-Israel positions. Eduardo, 36, is an attorney and member of the Federal Congress. In their discussion, Yair described the Brazilian president as one of Brazil’s greatest leaders and a fighter for his nation and its goals. He even brought up the struggle against socialism, which “caused enormous damage to Brazil.” It seems like the two men like each other. They met when Yair accompanied his parents on a state visit to Brazil in 2018 as guests of Bolsonaro. The podcast was translated into Hebrew for the benefit of Israeli listeners.

The first topic they discussed was the media in Israel and the United States, which Netanyahu described as “very progressive” and leaning toward socialism as well as being opposed to nationalism. “What’s it like over there?” he asked Bolsonaro Jr. As it turns out, Bolsonaro feels the same way.

Yair is considered to be the more extroverted son of Benjamin and Sara Netanyahu, and also the more controversial. His younger brother, Avner, is much more reserved. He uses social media only rarely, and then mainly to post unifying messages or just photos of himself with his girlfriend.

In contrast, Yair first became active on social networks about a decade ago. He started posting under a pseudonym, and he only began posting under his own name upon completing his military service in the Office of the IDF Spokesperson. He was the brash, outspoken arm of his father’s campaigns in the last few elections, frequently attacking his father’s rivals like former Likud Minister Gideon Saar and Chairman of Yisrael Beitenu Avigdor Liberman. He used crude, vindictive language, which sounded like something he heard in private conversations with his family.

Yair still uses his Twitter account for uninhibited attacks, sometimes dozens of times a day. His provocative remarks often make it to the media, or in some cases, to court. He has sued and been sued because of his online squabbles. Much of the mainstream media ridicules him, referring to him as a parasite who lives off the dime of working Israelis. They point out that he still lives in the Prime Minister’s Residence, even though he is approaching 30. Still, he has many fans among the right in both Israel and the United States.

After one of the many online scandals that he instigated, he was blocked by Facebook for 24 hours. It happened in December 2018 after he called to avenge the death of Israeli troops in a terrorist attack. The post was quickly removed by Facebook. In response, he lashed out at Facebook itself, claiming, “They are trying to silence us. … The radical progressive thought police on Facebook has even reached me. Congratulations!” This post was also removed, and Netanyahu was blocked from Facebook for a day.

In the summer of 2019, Netanyahu flew to the United States for a highly publicized tour in which he gave his first TV interview. As expected, he chose the small right-wing conservative Blaze TV for his inaugural interview, which was largely quoted. In that interview, he called President Donald Trump a “rock star,” adding that the president "is the best friend Israel and the Jewish people ever had in the White House.”

During that same trip, he visited with Katrina Pierson, one of Trump’s senior campaign media advisers in his 2020 election campaign. He also visited the studio of Fox News host Tucker Carlson and addressed a crowd of right-wing supporters of Israel in Alabama.

This was also when he began appearing in the right-wing Israeli media. In one such appearance on Channel 20, he said, “I pay a very steep price for expressing myself on social media, but for my entire life, when I sat in front of the television when I was in pre-school and in school, I saw the horrible lies they told about my parents and the entire right-wing bloc, and I decided I cannot remain silent. I must give voice to my truth and the truth of a very large sector of the population in the State of Israel. Social media is a wonderful democratic platform and a place of genuine pluralism.”

Back to the podcast: While the first episode did not make major headlines in the mainstream media or on social networks, there can be no doubt that this new platform will evoke plenty of interest and make lots of noise around his father’s legal and political challenges as long as Yair keeps bringing interesting and important guests to his show.