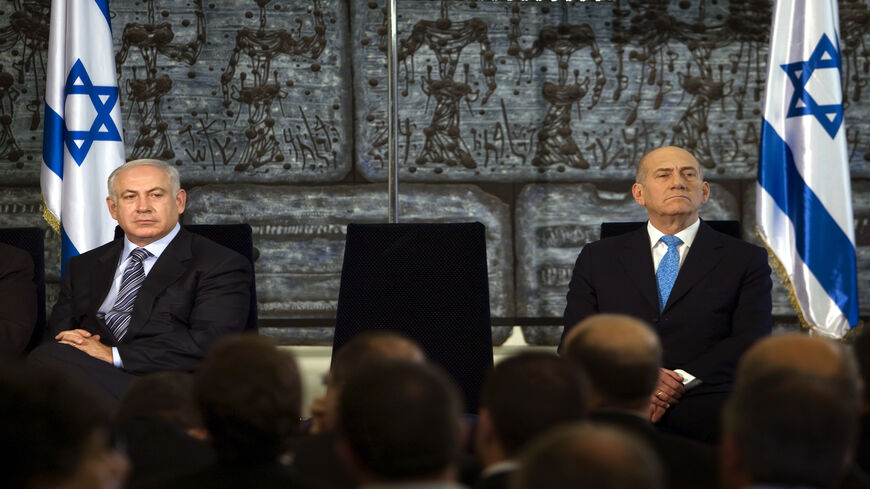 Try to imagine former US President Barack Obama and his two daughters, former US President Donald Trump and his wife packed into a tiny Washington courtroom for a hearing on a defamation suit focused on Trump’s mental health and that of his family. That is exactly what happened in Tel Aviv on Jan. 10.

Packed into the small courtroom of Magistrate's Court Judge Yariv Amit were former Prime Minister Ehud Olmert and his lawyers, and former Prime Minister Benjamin Netanyahu, his wife Sara Netanyahu and their son Yair, along with their lawyer. The rest of the limited space was taken up by photographers and television news crews.

The hearing dealt with a 837,000 Israeli shekel ($268,000) lawsuit filed by the Netanyahu family against Olmert for describing them as being “mentally ill” in several TV interviews. The judge tried to convince the sides to accept a compromise and avoid a trial, arguing that the evidentiary phase of such a procedure would turn into a circus.

The judge is right. It would be the best show in town. Neither side will emerge unscathed, not those said to be mentally ill, nor the claimant. But the enmity and hatred between the two former prime ministers have overtaken all logic. Olmert rejected the proposed compromise and as things stand now the trial will proceed. It might be wise to invest in popcorn stocks.

The issue is highly sensitive. Rumors have been rife over the years regarding the mental well-being of Netanyahu family members. Olmert has adopted two different cumulative lines of defense, arguing that he had spoken the truth about family members’ mental state and that his comments were protected under the right to free speech.

Such lines could also contradict each other. Olmert will have a hard time proving that any member of the Netanyahu family suffers from a mental illness unless the court allows a psychiatric test to be administered to the petitioners. Prospects of such a judicial ruling are not high. Does Olmert hold information regarding a family member’s history of psychiatric hospitalization? Does he have a medical opinion about any of them? That remains to be seen. What counts is that Olmert insists he was telling the truth, negating the Netanyahus’ libel claim.

The second line of defense is much easier to prove. It rests on the fact that Olmert is not a doctor and was not making a medical determination; he was only expressing his views based on the family members’ behavior and different events in which they were involved. Olmert himself cited reports according to which the Netanyahu family’s former lawyer and close confidant, the late Yaakov Weinroth, once suggested to former Attorney General Yehuda Weinstein that Mrs. Netanyahu was not fit to stand trial.

Less than a year before his 2018 death, that same attorney said in November 2017 that sometimes the prime minister “feels he is being chased by something he can’t define, sometimes he calls me in the role of a quasi-psychiatrist. I know how to calm both of them, but five days later, it could pop up again,” Weinroth told the investigative TV program “Uvda.”

Will these comments suffice to clear Olmert? Hard to know. Free speech, including free defamatory speech, are basic rights enshrined in Israel’s legal system and courts regularly grant it sweeping protection. Nonetheless, there are exceptions to the rule, such as the use of the term “Nazi,” which constitutes in Israel clear cause for a lawsuit. A ruling in the Olmert-Netanyahu trial could set a binding precedent regarding the use of the term “mentally ill” as being defamatory.

The lawsuit is far more explosive than it appears given the many reports and incidents involving Sara Netanyahu more or less since her husband entered politics in the 1990s. A long series of scandals and lawsuits brought against her — a conviction on charges stemming from false billing for household goods used in the family’s private residence, recordings in which she is heard screaming at staff and reports of alleged undue influence on appointments and policy — have made Sara Netanyahu a highly controversial figure. She enjoys equal amounts of support and hatred among Israelis. The family’s lawsuit against Olmert could thus turn into a public trial about the woman who has fascinated Israelis for the past quarter century. The Netanyahus are hardly likely to enjoy such an outcome.

Olmert, too, is walking a thin line. He reportedly agreed to the following compromise language: “Everyone knows that the defendant is not a psychiatrist and his words were not a medical diagnosis. His remarks expressed an opinion, public criticism relating to the plaintiffs’ public conduct and were based on things he was told by various people, family confidants, professionals and others.” But the Netanyahus refused to go along, demanding a clause that would have allowed the court leeway to rule compensation in their favor.

Olmert refused point blank. In an interview he subsequently gave to Channel 12 News, the former prime minister claimed that the uncontrolled avarice of the Netanyahu family led them to condition the compromise on potential monetary gain, saying that to that he could not agree.

The trial will now enter its evidentiary stage and could become both the saddest and most entertaining legal saga in Israeli history. But the sides also have lots of time to come to their senses. Logic dictates that a compromise will eventually be found. The trouble is that this entire case contains many elements. Logic is not one of them.