Deliveries of Russia's Sputnik V coronavirus vaccine are as controversial as the vaccine itself. 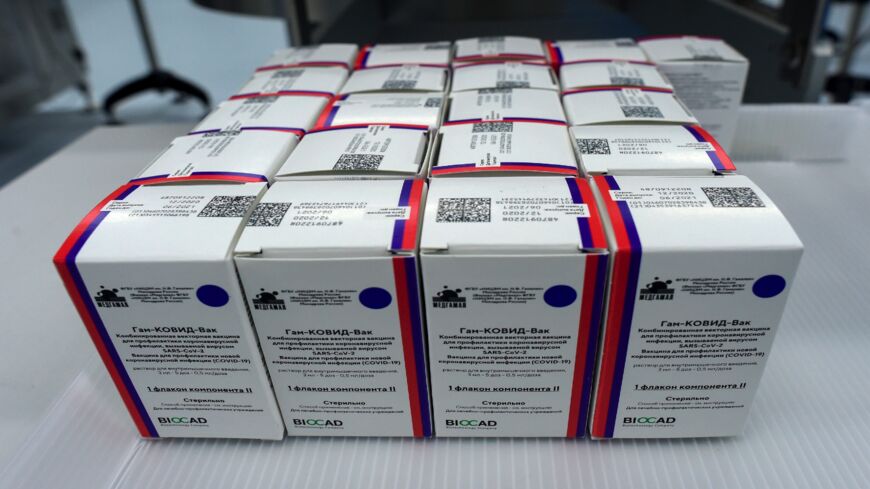 A picture taken on Dec. 4, 2020, shows the production of Russia's Gam-COVID-Vac vaccine against the coronavirus disease (Covid-19), registered under trade name Sputnik V, developed by the Gamaleya Research Institute of Epidemiology and Microbiology in coordination with the Russian Defense Ministry. - OLGA MALTSEVA/AFP via Getty Images

In February this year, Russian veteran journalist Alexey Venediktov singled out three achievements Russian President Vladimir Putin felt most proud of at the time. Those were Moscow’s peace-making efforts in Nagorno-Karabakh, the development of new weaponry and the Russia-developed coronavirus vaccine. Given Putin’s predilection for public appraisal of the Russian vaccines, there are no grounds to distrust Venediktov’s observation, which came on the back of a traditional private meeting between Putin and editors-in-chief of the Russian media.

Hence, one should not be surprised by looking at how sensitive Russian authorities become when confronted with any criticism of the Sputnik V vaccine. Moscow is assiduous in promoting the home-produced drug around the world, including in the Middle East-North Africa (MENA) region. But however hard the Russian propaganda machine works to pin all the blame for Sputnik V’s troubles on the Western plot against Russia, there is no way around the fact that the development, production and distribution of the vaccine were hastily handled. This was aggravated by disinformation, violation of rules and incompetence on the Russian side.

The bottom line is that the controversy around Sputnik V’s reputation was unavoidable and independent of any meddling from abroad. Indeed, Russians themselves display a wary attitude toward the vaccine. The slow pace of vaccination in the country serves as a testament to that.

So preoccupied the Kremlin is with gaining the status of the virus "destroyer" (both at home and abroad) that it decided to limit the access of foreign vaccines to its citizens. Indeed, Russia is one of only three countries in the world (alongside Cuba and China) that practices such vaccine isolationism. For example, an Israeli clinic in Moscow, Hadassah, could not succeed in bringing into the country a batch of the Pfizer-BioNTech-produced vaccine (BNT162b2). That is despite Hadassah being part of the Skolkovo medical network, which operates under a special legal regime that gives it access to drugs registered in the Organization for Economic Cooperation and Development member states.

As for Russia’s vaccine diplomacy, its record has not been unblemished either. The list of troubles includes complications with Sputnik V sales to Africa, scandals in Europe and even in Central America. When it came to the Middle East, though, things appeared to go relatively smoothly. Even though Sputnik V is still not registered in Israel, the latter gave its approval for the delivery of the Russian-produced vaccines to the Gaza Strip, as the Palestinian national administration became the first in the region to greenlight the Russian vaccine. Turkey, while initially reticent to purchase Sputnik V because of its alleged failure to meet conditions of "good laboratory practice," ended up not just purchasing 50 million doses but also striking a deal on the production of the Russian vaccine on its territory. The Russian Direct Investment Fund (RDIF), a backer of the Sputnik V vaccine, has taken an active role in promoting the positive coverage of the vaccine across the MENA region.

But a deeper look betrays cracks in Moscow’s efforts. It is not without reason that the development of the Sputnik V vaccine became a reflection of all the problems faced by Russian science, pharmaceutics, PR and implementation of government policy that is often done via irregular channels.

Looming large are July revelations about the RDIF’s decision to secretly award exclusive rights to sell and distribute the Sputnik V vaccine to Aurugulf Health Investments, a Dubai-registered company. Officially, the United Arab Emirates (UAE) approved the Russian vaccine in January of this year. This prompted Kirill Dmitriev, the RDIF chief with close ties to Putin’s family, to proclaim the UAE as being among Russia’s "key partners" in the Middle East. Ostensibly, it was under Russian directions that the UAE shipped 20,000 Sputnik V vaccines free to the Gaza Strip. However, as uncovered by The Moscow Times journalists, the sales to many countries in the region came through the Dubai-based company Chimera Investments, allegedly run by Sheikh Tahnoon bin Zayed al-Nahyan, the UAE’s national security adviser and brother of the current leader of Abu Dhabi. Chimera Investments participated in the sales of Russian vaccines to Pakistan and Lebanon.

What is more, the UAE resellers asked clients to pay several times more than Russia’s advertised price for the Sputnik V vaccine. A shadow operation like this could likely not have been put together without the trust built between Russian and UAE negotiators in Lebanon in their joint work to support the private military company Wagner, a source close to the Russian Ministry of Foreign Affairs told Al-Monitor.

Even putting the "UAE scheme" revelations aside, Russian vaccine diplomacy in the Middle East has suffered from other scandals. Alireza Naji, head of the Virology Research Center in Iran, told about the shortage of vaccines due to lack of delivery from Chinese and Russian companies. Naji accused these companies of not honoring their commitments in terms of delivering Sinopharm and Sputnik vaccines. Against this backdrop, Naji floated the idea that those who received the first shot using Sputnik or Sinopharm might receive the Iranian-made vaccine COVIran Barakat, which at the time barely passed the final trials. Moreover, Iranian doctors publicly announced that before using the controversial Russian vaccine, it needs to conform to clear verification criteria.

Or take Syria, Russia’s foremost regional ally. It is hardly a good sign that, according to some reports, Damascus used vaccines as "currency" in negotiations over the release of an Israeli woman, Dina Cohen. Allegedly, to persuade Bashar al-Assad to release Cohen, Israel agreed to purchase Russian-made vaccines that would then be sent to Syria. Indeed, it so coincided that shortly after the Israeli woman was released, Syria received its first batch of Sputnik. According to Al-Monitor sources among the Russians working in Syria, this deal might also explain the secrecy surrounding the details about vaccines shipped to Syria.

This lack of transparency was showcased by a recent statement by Alexander Lavrentiev, Russia's presidential envoy to Syria. In an interview with the TASS agency, Lavrentiev claimed that the agreement on the vaccine deliveries to Syria has been reached "in principle." Yet he did not mention the exact quantity of doses to be shipped to Syria or for what price, only suggesting that supply volumes will be large and part of the orders will come for free.

In the end, there are no signs of a public vaccination campaign being deployed on the ground in Assad-controlled territories, a source told Al-Monitor. “Yet the overall epidemiological situation in Damascus and Latakia is not too bad given a high share of those who already had the virus,” he noted sardonically. Another one of Al-Monitor’s interlocutors, who spent a considerable time in Syria in a military capacity, compared Russian claims about vaccine deliveries to Syria to the process of the so-called "reconstruction" that is going on in the country. “Things appear to be moving, but no one quite knows what is going on.”