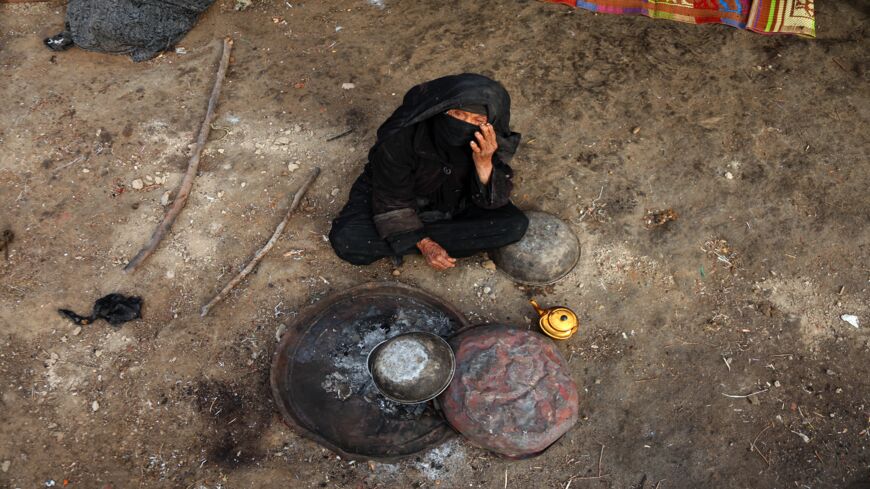 A woman looks on at the waste dump of Diwaniyah where families live in the rubbish with no electricity or drinking water, on March 25, 2018. - HAIDAR HAMDANI/AFP via Getty Images

Citizens in the capital of Iraq's Kurdistan Region, Erbil, are now buying water at prices exceeding $50 per tanker, as water has been cut off for more than two weeks in most areas of the Kurdish capital. The private water tankers carry between 3,000 and 4,500 liters (some 800 to 1,200 gallons) of water that is used for drinking and washing; it generally lasts less than a week per family.

A severe drinking water shortage hit Erbil over the last two weeks due to the region's drought. Erbil depends 65% on surface water coming from the Zab River and 35% on well water; the drought has affected both sources.

The Kurdistan Regional Government's directorate of water and sewage announced July 7 that the water crisis stems from the decrease in rain and snow, which affected the surface water. The drop in rain and snow coupled with the drop in the level of groundwater and the drying up of many wells is a result of climate change and also high demand, the directorate said.

Local authorities are now asking people to "ration consumption in the use of water and place float valves in water tanks to reduce any water waste.”

In a July 10 press conference, Erbil Deputy Gov. Omed Khoshnaw said on a visit to Soran district, “The water crisis in Erbil is under control and work is underway to solve it.”

“The regional government leadership is providing support to solve the crisis and reduce the effects of drought,” he added, noting that "1 billion Iraqi dinars" ($685,000) had been allocated to resolve the crisis.

Masoud Karash, deputy governor of Erbil and head of the province’s Supreme Committee for Combating Drought, explained to Al-Monitor that the crisis is not new and recurs every year — especially in the summer — as a result of high temperatures and power outages, in addition to the low levels of rain and snow. Karash said the crisis is not in the entire province but only in some areas, especially those at high altitudes.

Iraqi Minister of Water Resources Mahdi Rashid al-Hamdani said that “water releases from Iran have reached zero,” indicating “efforts are being made to mitigate the damage of water scarcity in eastern and northern Iraq.”

In an interview with Al-Monitor, Kurdish activist Murad Majid said he considers Iran's water cut a war on Kurdistan Region, adding this is not the first time Iran has cut off water from Iraq and Kurdistan Region in particular.

Gulnar Ahmed, a resident of eastern Erbil, told Al-Monitor the situation is difficult, as two days ago water taps in the house had no water. She went to the well near their house, but it had dried up. “We no longer know what our options are,” she said.

Ahmed said the family waits up all night for the water truck to arrive and now buys one truck of water at a price of 80,000 Iraqi dinars ($55), which constitutes a new burden on the family in light of the economic crisis the region has suffered from for years.

Majid said citizens in Iraqi Kurdistan also suffer from poverty, making it near impossible for average citizens to buy water for their homes.

In such circumstances, the water crisis is expected to continue for a long time, as local and federal governments seem incapable of solving the crisis.