Facing drought, sandstorms and other factors contributing to the deterioration of its natural environment, the Iraqi Kurdistan Region is working to document and protect its ecosystem. 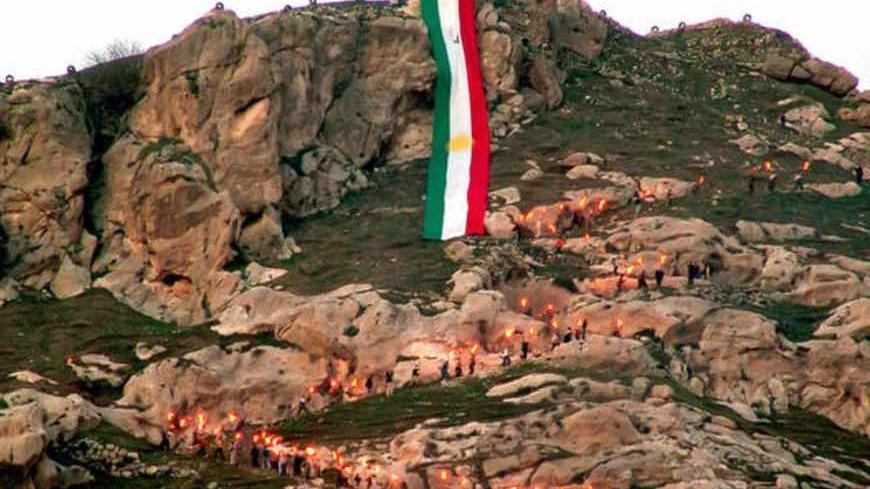 Iraqi Kurds climb a mountain decorated with a huge Kurdish flag as they celebrate New Year or Nowruz, March 21, 2006 in the northern town of Akra. - SAFIN HAMED/AFP/Getty Images

The Iraqi Kurdistan Region enjoys a natural environment that differs from the rest of Iraq, characterized by mountains, valleys, rivers and forests. As a result, Iraqis flock to the Kurdistan region during the summer to escape the heat and during the winter to enjoy the snow. Yet the environment is threatened by several factors, namely neglect, sandstorms and long years of drought.

The Kurdistan Regional Government (KRG) has started to recognize the importance of protecting the environment. For this purpose, it set up a ministry charged with environmental protection in 2005. Due to a reduction in the number of ministries, the ministry was made into an independent agency charged with protecting and conserving the environment, in addition to a council that consists of representatives of 14 KRG ministries.

On June 5, the KRG held an environmental conference in Erbil, during which KRG Prime Minister Nechirvan Barzani delivered a speech that reiterated the need for attention to this matter.

He noted, “The KRG must look after this delicate issue; the ministries and concerned parties should raise awareness in the field of environmental protection in order to maintain a safe environment that [ensures] the safety of society. Additionally, NGOs’ environmental officials, teachers, clerics, intellectuals, media outlets and cultural associations should play an effective role in spreading a culture of preserving the environment.”

Barzani pointed out that “the Iraqi Kurdistan region, in light of such conditions, is not far from the threats of environmental pollution. The KRG has to support the issuance of laws and the establishment of NGOs and commissions that are specialized in protecting the environment of the region, in addition to enforcing the law and fulfilling its duties in that vein.”

Barzani addressed the region's citizens and called on them to take good care of their beautiful surroundings, saying, “The nature of Kurdistan is scenic; it is our duty to protect it from pollution and destruction.”

Barzani called on governmental agencies and civil-society organizations to exert strenuous efforts toward preserving the natural environment of the Kurdistan Region, stressing that environmental protection must become a public culture that influences each and every member of society.

Samad Mohammed, the head of the KRG's Environmental Protection and Conservation Committee, told Al-Monitor, “There are many reasons for the environmental pollution witnessed in the region, some of which are related to the soil, water, sand storms, floods and drought, in addition to the increase in the number of cars and factories, the burning of trash and sewage water that is dumped in the rivers in some places.”

At this point, statistics have yet to be gathered regarding pollution levels in the Iraqi Kurdistan Region, especially as the levels depend on contributing factors.

Mohammed added, “We cannot talk of a specific level of pollution because it changes from one area to another. The pollution level in cities, where urban expansion is ongoing, and in the area where oil refineries and factories are located differs from that in mountainous areas. Therefore, the level of pollution in the Kurdistan Region cannot be determined.”

“We set up a council for environmental protection and preservation consisting of representatives from 14 ministries that are helping us to protect the environment,” Mohammed told Al-Monitor.

However, the KRG is more focused on raising awareness than passing laws.

Sadik pointed out that “The activity of the factories should be carried out pursuant to the Law on Environmental Protection and Improvement No. 8 for 2008. We have the problems of urban expansion and a population increase, which add pressure on the environment, in addition to the large number of vehicles, which amount to more than a million cars.”

Article 28 of said law prohibits “any activity that directly or indirectly impairs the soil of Class A agriculture lands, or contributes to the deterioration or pollution of these lands.” It also prohibits the “construction or residence of any industrial, commercial or service activity on agriculture land in violation of the provisions of this law.”

Statistics released by the General Directorate of Traffic in Iraq indicate that there are currently 1,084,000 cars on the region’s roads, while statistics from the Ministries of Commerce and Industry in the KRG show that there are 2,250 functioning foreign companies, including Arab companies, in the Iraqi Kurdistan region.