Parts of northern Iraq have been hit by flooding after a year marked by drought, which many say is due to climate change likely to worsen in the coming years. 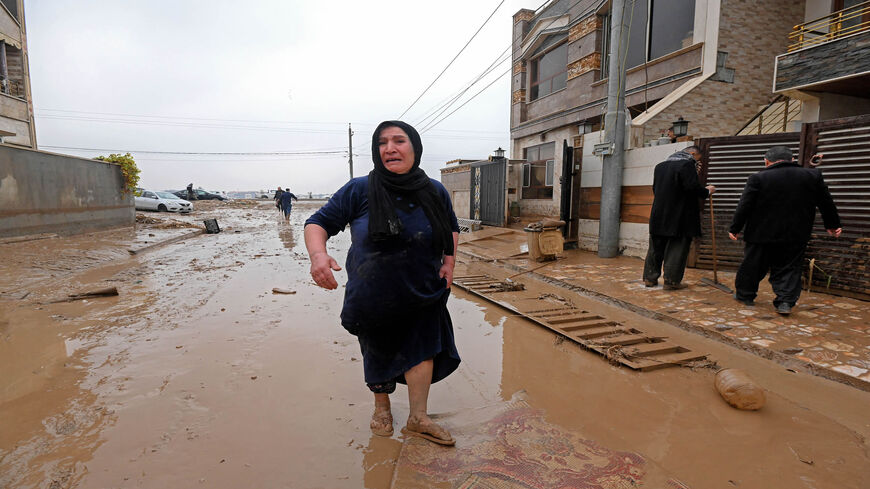 A resident reacts as she walks down a debris-filled street in the area of Daratu, on the outskirts of Erbil, after flash floods caused by torrential rains left eight people dead, Iraqi Kurdistan, Dec. 17, 2021. - -/AFP via Getty Images

ERBIL, Iraqi Kurdistan — Muddy torrents rushed violently through some parts of the capital of Iraqi Kurdistan and the surrounding area Dec. 17, smashing homes, submerging vehicles and sweeping away people.

The floods and accompanying storm left at least 12 dead, including two foreign nationals. One was reportedly killed by lightning.

Of the two still missing as of Dec. 21, one was an infant presumed dead.

Local media outlet Rudaw quoted the Kurdistan Regional Government’s (KRG) Minister of Municipalities and Tourism Sasan Awni on Dec. 20 as saying that the flooding had “damaged nearly 3,000 houses and over 150 businesses,” destroying over 400 homes entirely.

Previous serious flooding had occurred in Erbil in October. Inadequate drainage and sewage systems in the areas affected were blamed. An investor who had engaged in building in that area was reportedly jailed in connection with this.

An iron bridge collapsed in the flooding in Ninevah province, west of the Kurdistan Region.

As rain continued, dozens of people in the Erbil subdistrict of Daratu were evacuated from their homes Dec. 20 as a precaution. No further flooding had being reported the following morning.

Risks inherent in climate change have in recent years gained more attention at the international level, with effects already been seen in Iraq.

According to research results released this month by the Norwegian Refugee Council, “One in two families in drought-affected regions require food assistance because of drought, while one in five do not have sufficient food for everyone in the family.” It continued, “37% of wheat farmers and 30% of barley farmers have suffered crop failure of at least 90% of expected harvest [in drought-affected areas]."

The United Nations Environment Programme said in 2020 that Iraq is the world’s “fifth most vulnerable country in the world to decreased water and food availability and extreme temperatures, which will negatively affect food security, water security, social security and health security in Iraq.”

The United Nations Food and Agriculture Organization also noted that “Iraq is an agricultural country,” stressing, “Rain fed agriculture is practiced in the northern parts where the mountains, foothills, and Jazeera desert are located. Land potentially suitable for agricultural production however is not more than 27 percent of the total area of the country. The rest includes deserts with extremely low rainfall and rocky/steep mountains.”

Iranian dams have in recent years sharply cut the amount of water flowing into the Kurdistan Region as well.

Those concerned about deteriorating water supplies in the rest of Iraq and the country’s marshes in southern Iraq, however, warn that if plans presented for over 200 dams in the Kurdistan Region — initially proposed in 2014 — go through, this will have a significantly negative effect on other already suffering areas.

The World Bank noted in a recent report, “By 2050, a temperature increase of 1 degree Celsius, and a precipitation decrease of 10% would cause a 20% reduction of available freshwater. Under these circumstances, nearly one-third of the irrigated land in Iraq will have no water by the year 2050.”

Droughts experienced in Iraq have severely impacted the country’s food production as well as attempts to ensure that those displaced in areas under the Islamic State and the war against the international terrorist group between 2014 and 2017 are able to return home and have a way to sustain themselves.

In October, Iraq's Agriculture Ministry said it would reduce the area for the 2021-22 winter crop by 50% due to a water shortage.

The World Bank Fall 2021 report noted, “By 2030, Iraq is projected to face severe water scarcity,” citing as one of the major factors as being “reduced water availability due to climate change.”

It added that a 2015 Iraqi national government strategy had “envisioned spending US$180 billion in the sector over this period, but the financing did not materialize as expected due to the oil price decline and the impacts of Islamic State insurgency.”

In some parts of Iraq, land still occupied by armed forces prevents local residents from using their land and thus prevents them from ensuring their livelihoods from it.

In western Anbar, for example, Shiite-led Popular Mobilization Units continue to occupy large swaths of land near the border city of Qaim that had previously been used by residents for farming, allegedly for “security reasons.”

One Qaim resident and long-standing contact of this journalist — who had lived in Erbil during the years his home province had been under IS control but had moved back to his home in Anbar after it was retaken — had in recent months been looking into moving back to Erbil due to high unemployment levels in western Anbar and the difficulty to support a family there.

Many of Iraq’s Sunni Arabs have long felt safer in the Kurdistan Region of Iraq than in Baghdad or other Shiite-dominated areas of central and southern Iraq.

After the Erbil home of a relative was damaged extensively in flooding in October, however, the Qaim resident decided there was no longer any point in trying. Some close to him are now looking into ways to move abroad, Al-Monitor was told, but finding the funds and means to do so is becoming more difficult.

An appeal for donations by the Erbil governorate was posted on the Twitter account of the foreign relations department of the leading political party in Iraqi Kurdistan, the Kurdistan Democratic Party, to assist those affected by the flooding. New Year’s Eve celebrations were all canceled out of respect for the victims.

KRG President Nechirvan Barzani allocated 1 billion Iraqi dinars ($685,000) to provide food and other necessities to those suffering from the floods.

Compensation for losses caused by the flooding, however, have been estimated to amount to over 21 billion dinars ($14.4 million), Awni said.