The Iranian comments followed US special envoy for Iran Robert Malley's pledge that the United States would not accept a partial deal that does not bring home all four detained Americans from Iran. 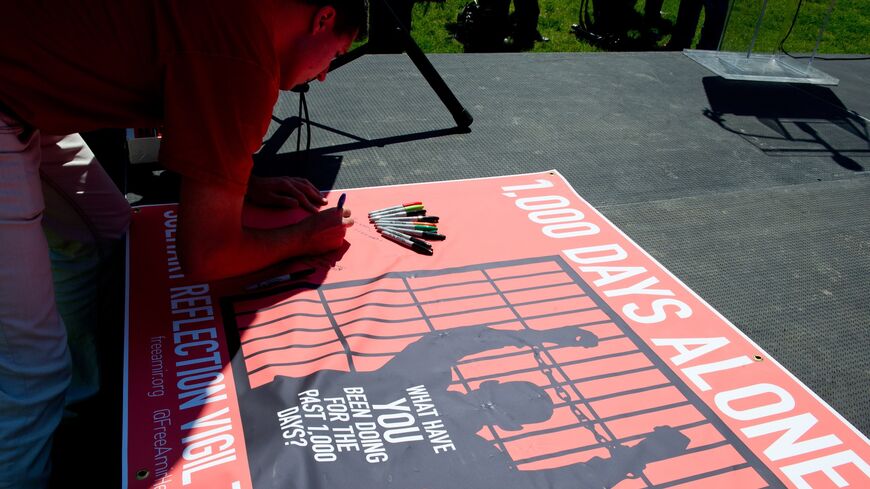 A man signs a banner of support for imprisoned US Marine Corps veteran Amir Hekamti, May 19, 2014, during a vigil held for him in Lafayette Park across from the White House in Washington, DC. - KAREN BLEIER/AFP via Getty Images

Iran said Tuesday that negotiations are ongoing over a possible prisoner exchange with the United States as efforts to salvage the landmark nuclear deal appear stalled.

"Negotiations are underway on the exchange of prisoners between Iran and America, and we will issue more information if Iranian prisoners are released and the country's interests are secured and the talks reach a conclusion," said government spokesperson Ali Rabiei.

"‌Because of its humanitarian aims, Iran is ready to exchange all American political prisoners in exchange for the release of all Iranian prisoners who have been detained around the world at the behest of America," Rabiei told reporters.

Rights groups accuse Iran of jailing dual nationals and foreigners to gain leverage for sanctions relief, the unfreezing of assets and other concessions from their home countries. According to the New York-based Center for Human Rights, Iran is holding at least 15 dual nationals and one foreign citizen.

In February, national security adviser Jake Sullivan said the United States had begun to communicate with the Iranians on the hostage issue. In May, state-run Iranian TV reported that Washington and Tehran had agreed four Iranian-Americans detained in Iran for alleged spying would be traded for four Iranians held in the United States for sanctions violations.

Iranian officials then denied the report, which also said the Biden administration had agreed to release $7 billion in frozen Iranian funds. The United States also dismissed the rumored exchange as false.

Last week, US special envoy for Iran Robert Malley said talks to secure the release of the Americans had “made some progress.” He added that the Biden administration would not accept a partial deal with Iran, recalling when Siamak Namazi was the only detained American of six not returned home as part of a swap orchestrated under the Barack Obama administration in 2016.

"We're saying all of them have to come home. We don't want to do a partial deal. We don't want to leave anyone behind. Again, I know how painful that was last time and don't want to relive history," Malley told an event organized by Hostage Aid, a nonprofit advocacy group.

Babak Namazi told Al-Monitor in June that he worries his brother and father could be left behind in a possible prisoner deal.

“That fear is ever present, irrespective of what assurances one receives,” he said. “We need to find any way to bring them home, and bring them home before it’s too late."

Washington is currently in indirect talks with Tehran over a return to the nuclear accord that President Donald Trump abandoned in 2018. But Biden administration officials say serious differences remain between the two sides, including how much sanctions relief the United States would provide if Iran returns to compliance.

On Monday, State Department spokesperson Ned Price told reporters that Malley and his team are prepared to return to Vienna for a seventh round of talks once they are scheduled.