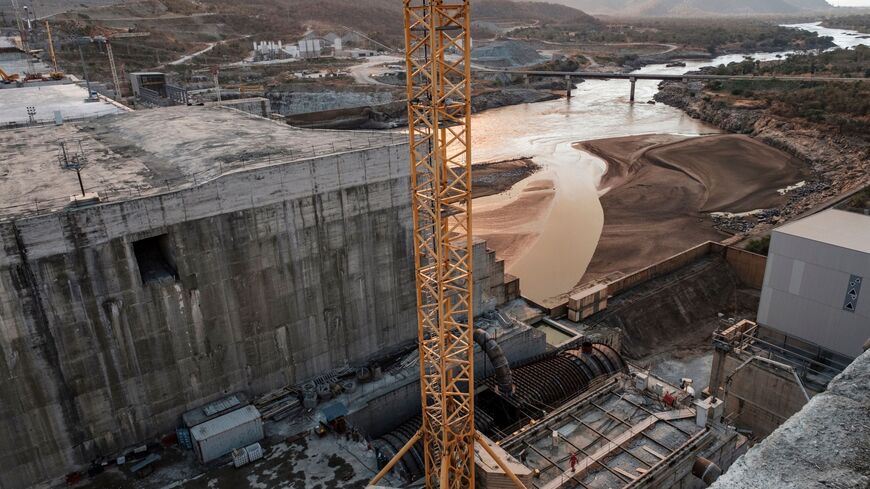 The Blue Nile River passes through the Grand Ethiopian Renaissance Dam near Guba on Dec. 26, 2019. Ethiopia said the second filling of the dam had been completed on July 19, 2021. - EDUARDO SOTERAS/AFP via Getty Images

Ethiopia’s government said Monday that it had completed the second filling of the reservoir of its Grand Ethiopian Renaissance Dam on the Nile River.

“The second filling of the Renaissance dam has been completed and the water is overflowing," Ethiopia’s Water, Irrigation and Energy Minister Seleshi Bekele tweeted.

Why it matters: Egypt’s government has vociferously objected to Addis Ababa’s $4 billion mega-project without there being an international agreement for its operation, fearing the dam could drastically reduce Egypt's downstream share of the Nile’s water. Egyptian President Abdel Fattah al-Sisi’s government has bolstered military and intelligence ties with other governments in East Africa and hinted at a possible military operation against Ethiopia.

A decade of negotiations between Egypt, Sudan and Ethiopia has failed to produce a resolution to the crisis. Egypt and Sudan are demanding Ethiopia agree to written procedures for the dam’s operation, but the government in Addis Ababa has so far refused.

A draft resolution by Tunisia following the UN Security Council session on the GERD on July 8 has made little headway despite Cairo’s vocal support. The Biden administration earlier this month signaled it supports a resumption of the African Union-mediated process to end the dispute.

What’s next: The African Union is seeking to restart talks between the three major stakeholders in Kinshasa in the Democratic Republic of Congo this month, the Egyptian media reported.

Now that Ethiopia’s national elections are out of the way, there may be some room for compromise by Prime Minister Abiy Ahmed’s government.

Abiy’s government has staked its political future on the project, and the dam is set to receive its first turbines with the current filling, AFP cited an unidentified Ethiopian official as saying.

US diplomats have urged calm, warning that a second filling would likely raise tensions. Still, the Biden administration is treading carefully to avoid the perception that it is taking sides in the dispute as the previous Donald Trump administration did with Cairo.

Know more: Mohamed Saied explores whether more negotiations under the African Union offer any hope of resolving the dispute.