The rare criticism came as the Iranian establishment is accused of attempting to canonize the Taliban amid shifting regional dynamics. 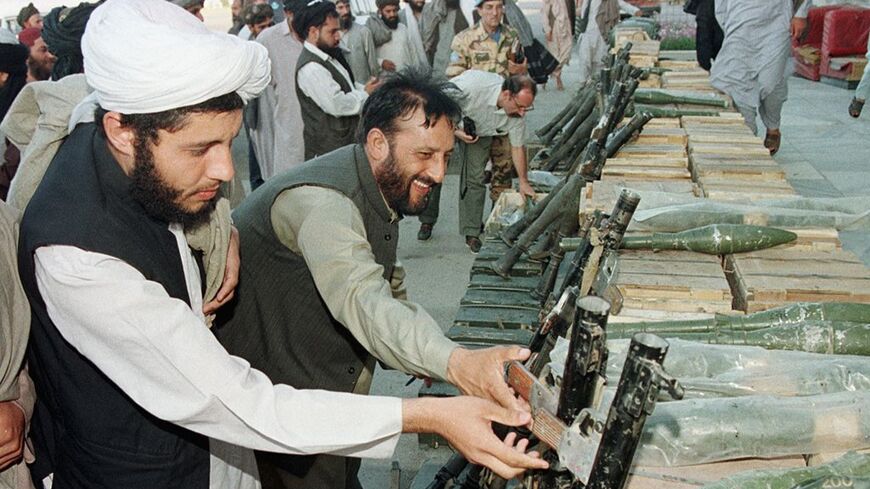 Taliban militiamen show Iranian arms and ammunition captured from Afghanistan's northern city of Mazar-e-Sharif to newsmen and diplomats at Kabul airport on Aug. 19, 1998. Taliban Foreign Minister Mullah Mohammad Hassan Akhond accused Iran of interfering in their internal affairs by providing arms and ammunitions to the opposition forces of Afghanistan. Eleven days earlier, eight Iranian diplomats in Mazar-e-Sharif were killed, and the Taliban is believed to have been behind the deaths. - SAEED KHAN/AFP via Getty Images

Grand Ayatollah Lotfollah Safi Golpaygani, one of Iran's most senior clerics, lashed out at the Islamic Republic's softened policy at a moment of rapid Taliban advances and widespread atrocities in Afghanistan.

Such an approach, the ayatollah warned, "is a grave and irreparable mistake." He cautioned the Iranian government not to trust a "terrorist" group "whose evil and murderous nature is no secret to the world." Golpaygani called on both Iran and the international community to "act with seriousness" to avert further "Taliban aggression against oppressed Afghans."

The remarks were made in reaction to what has been found to be the Islamic Republic's changing approach in light of the Taliban's control over swaths of territory across Afghanistan.

With the US and NATO withdrawal from the war-ravaged country and the consequent vacuum, Tehran has been increasingly seeking to redefine its presence in the new power play. Only last week, Tehran hosted a meeting between an Afghan government delegation and Taliban leaders as a sign of recognition for the latter's role in Afghanistan's political future.

The shifting stance has been more overtly laid out by the media representing the most hard-line sectors of the ruling establishment, including the Islamic Revolutionary Guard Corps (IRGC).

Most notably, the ultraconservative daily Kayhan drew criticism from both Iranians and Afghans after publishing an early July editorial on the Taliban advance, "in which there has been no sign of IS-style atrocities" and that the group "has declared that it has no intention of harming the Shiite communities."

The Taliban, according to Kayhan, is nowadays different from who we used to know, from those who used to slit throats." A rival Reformist paper, Etemad, accused Kayhan of acting as the spokesperson for the militant group. Others went further, saying Kayhan was "canonizing" the militant group. Facing the mounting backlash, the paper retracted the stance in an editorial a few days later. Yet elsewhere, a state TV program hosting a hard-line pundit patronized the Taliban, again "because the group is in no state of war with the Shiite" followers of Islam.

Shahussain Murtazawi, a senior adviser at the office of the Afghan president, has warned Iran's hard-liners about such an "absolutely false" approach. He reminded Iranians not to forget "the murder of their own diplomats by the Taliban."

Murtazawi was referring to a deadly takeover of the Iranian consulate in the Afghan city of Mazar-e-Sharif as part of a Taliban offensive and the ensuing fall of the city in 1998. Eight Iranian diplomats and a journalist were gunned down. Despite evidence, including from Human Rights Watch, the Taliban has denied responsibility for the killings.