In his first foreign visit as Iran's president, Ebrahim Raisi will sit down with Russian and Pakistani leaders amid new regional dynamics triggered by the US departure from Afghanistan. 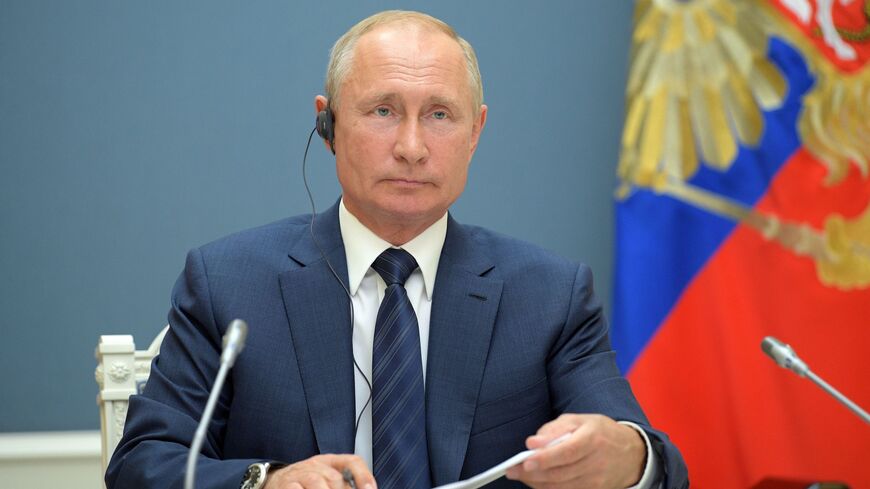 Russian President Vladimir Putin attends by a video conference a trilateral meeting with the leaders of Iran and Turkey on the topic of Syria, in Moscow on July 1, 2020. - ALEXEY DRUZHININ/SPUTNIK/AFP via Getty Images

Upon departure from Tehran, Raisi addressed reporters on the "importance of regional cooperation," a fundamental component of his stated foreign policy. As a hard-line president hailing from the less accommodating, anti-US layer of Iran's political structure, Raisi has promised to prioritize neighbors over Western powers, with which the Islamic Republic has rarely been on good terms over the past four decades.

The Iranian news media reported that during the two-day visit, Raisi will hold separate talks with Russian and Pakistani leaders, meetings that are expected to be overshadowed by the fast-paced developments in Afghanistan, where a lightning takeover by the Taliban prompted by the withdrawal of foreign forces seems to have created a tempting vacuum of influence for regional players.

Both Russia and Pakistan are among the very few nations to have signaled potential support for the Taliban rule. Given Iran's affinity with Russia on numerous international issues, Raisi's meeting with Putin, in particular, could further align Tehran's stance with that of Moscow and lay the ground for a new alliance and even recognition of the Taliban.

While Raisi's meetings in Tajikistan were expected to further clarify the Islamic Republic's approach toward the Taliban, there were few signs, if any, that Iran's political factions were bridging their gaps over the rule by the extremist group.

The ultraconservative daily newspaper Kayhan — run by the office of Supreme Leader Ayatollah Ali Khamenei — counted "eight challenges" that the Taliban is facing after "it astounded the world with sweeping advances across Afghanistan." In what appeared to be preparing the Iranian public for potential backing for the Taliban, Kayhan argued that without immediate financial aid, the Taliban government will fall apart. To Iran's hard-liners the exit from Afghanistan by their arch-foe, America, has been a moment of triumph, one that the Islamic Republic ought to seize.

In contrast, Reformist newspaper Jomhouri Eslami described the Taliban as "terrorists" and said their emergence and the ensuing clampdown on freedoms had coupled with financial strains to impose "closure on 153 Afghan outlets."

And with an account from the ground, moderate newspaper Hamshahri offered a slice of life from the western city of Herat, close to the Iranian border.

"No room for thieves, bandits and terrorists to roam around anymore," wrote a correspondent for the paper. "However, this could perhaps be explained by the fact those who once rendered the city insecure are now [busy] on the throne of power."