Gaza's special events have moved outside as constraints make venue owners and photographers get more creative. 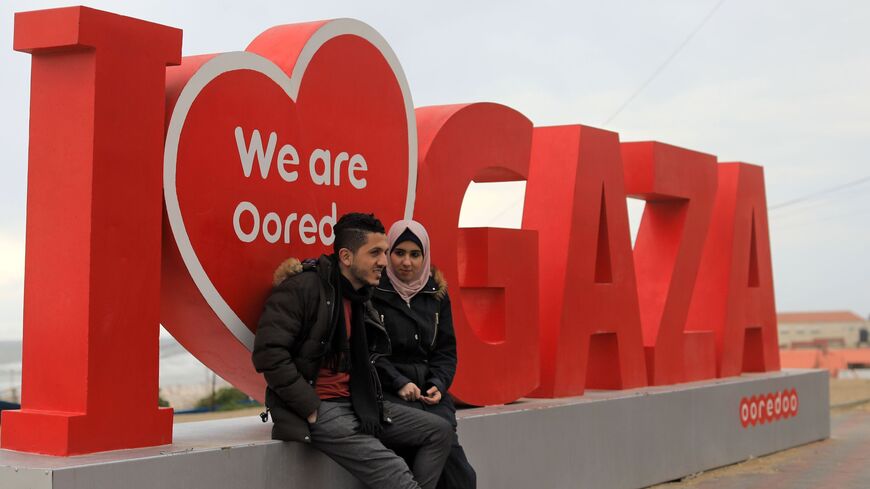 Palestinian groom Ahmed al-Ketnani, 27, sits with his 19-year-old fiancee Sara along the beach next to a sign reading "I Love (heart) Gaza", in Gaza City on March 20, 2020, after having decided to postpone their nuptials due to the COVID-19 pandemic. - MAHMUD HAMS/AFP via Getty Images

GAZA CITY, Gaza Strip — Young Palestinian photographer Shoroq Jaber began photographing social events and celebrations in open air settings in 2016. She had to convince her first clients in Gaza’s conservative society that photos for their special occasions could be taken outside the closed studios it's accustomed to.

Photographing special occasions such as weddings outdoors has recently gained popularity in Gaza, changing the notions of traditional photography. Unemployed university graduates are leading the movement amid rising unemployment and scarce jobs in Gaza.

Jaber had a tough time convincing citizens that photos on the beach or on agricultural lands are attractive on their own and that there is no need for extensive editing. She told Al-Monitor, “The challenge was big, and I was making huge efforts to convince the people holding the occasions to have their photos taken in open spaces. But people were convinced when they saw the dazzling results.”

Jaber, who graduated with a bachelor's degree in TV program creation and presentation at the University College of Applied Sciences in Gaza, lives in Khan Yunis in the south of the Gaza Strip. Since most beauty salons and event halls are located in Gaza City, she had to travel there to work. “I had to tolerate criticism for returning home late every day in Khan Yunis,” she said.

Recently, some photos Jaber published on Instagram caused quite a buzz in Gaza. She published the wedding photos of an already married man whose first wife reportedly only learned about his second marriage from the photos. Jaber said, “I got the permission of the couple, as usual, to publish their photos. I was surprised by the wave of criticism and mockery that claimed I had exposed the man.”

After the latest fighting with Israel ended on May 21, Mohammad Hajjaj, 22, and his partner Mohammed Nassar had to repair their project, Hollywood Beach, which also offers photography for social occasions.

Seven Israeli rockets hit Hollywood Beach, which was supposed to open for business on Eid al-Fitr (May 10), when the Israeli airstrikes began.

A year and a half ago, Hajjaj got the idea for the project that would find no competitors in the market. He rented three empty acres in the Sheikh Ajlin area west of Gaza City but struggled to obtain construction permits licenses and do the building.

At first, the engineers Hajjaj consulted told him it would be too difficult to build, but he was undeterred.

He contracted landscape artists to create a water feature, a palace and a horse-drawn Cinderella carriage because “people in Gaza are looking for something special and new,” he told Al-Monitor.

He brought most of the raw material from outside the Gaza Strip. “I bought most of the glass, decorative iron and plants from abroad because they are not found here. It is necessary to put in quality products that can withstand the sea’s moisture, which corrodes many types of material,” Hajjaj explained.

Naseem Abu Jamea, a professor of economics at Al-Azhar University, said that high unemployment rates are pushing young people in Gaza to pursue unique commercial projects. The 19-29 age group is struggling the most, with unemployment rates reaching 67%.

Abu Jamea told Al-Monitor, “Some unemployed yet ambitious young people are trying to create job opportunities to find a source of income for themselves and their families in light of the stifling crisis in the public and private sector institutions by creating projects with new and creative ideas for society.”

Abu Jamea added that wide distress in Gaza and factors like overcrowding have prompted people to seek natural settings for recreation. He said, “The location of these studios in natural settings is the natural result of people's quest for modernity and to keep up with new trends around the world.”

Arafat Helles, a professor of sociology at Al-Quds Open University in Gaza, told Al-Monitor that while Gazan society is conservative, global cultures and their influence have led to new trends and projects in Gaza.

Helles clarified that as long as there is no conflict with society’s cultural and religious values, people may be convinced to deviate from tradition. He said young Gazans interact on social media and are exposed to global cultures and ideas by Western TV series.

He noted, “We find among the youths bold people who have creative commercial and marketing ideas in Gaza. They present creative and challenging projects. The presence of a receptive market for their ideas encourages them to move forward.”