Turkey's leaders are brushing off the Taliban's warnings over extending its mission in Afghanistan. 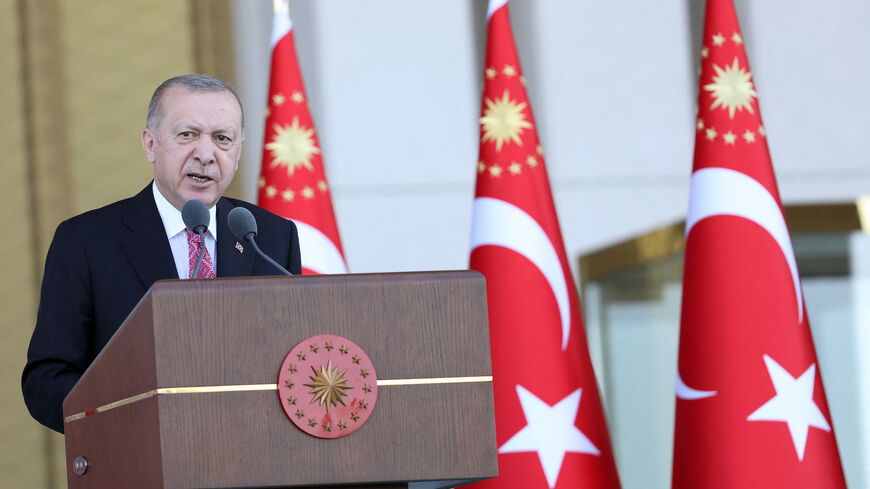 Turkish President Recep Tayyip Erdogan addresses relatives of victims, veterans and citizens after laying flowers during a ceremony marking the Democracy and National Unity Day at the Presidential Complex in Ankara, Turkey, on July 15, 2021. - ADEM ALTAN/AFP via Getty Images

Turkey’s President Recep Tayyip Erdogan called on the Taliban to end its “occupation” of Afghanistan in a rebuttal to the group’s warnings last week against a sustained Turkish troop presence there.

Speaking to reporters before heading to northern Cyprus on Monday, Erdogan said the Taliban “need to end the occupation of their brothers’ soil and show the world that peace is prevailing in Afghanistan right away.”

Erdogan’s comments followed statements by the Taliban last week rejecting Ankara’s proposal to leave some 500 troops in Afghanistan to secure Kabul’s Hamid Karzai International Airport after NATO and US forces withdraw from the country by the end of August.

Afghanistan and Turkey have historic ties, a matter alluded to by Taliban officials last week. Still, the group issued statements opposing the Kabul airport mission, including a warning that Turkish troops will be treated as an occupying force.

A written statement from the group last Tuesday called Turkey’s plan “ill-advised, a violation of our sovereignty and territorial integrity and against our national interests.” The Taliban condemned the proposal, calling it “reprehensible.”

Asked about the group’s stance today, Erdogan said, "In the statement made by the Taliban there is no phrase 'We don't want Turkey.'”

The president’s comments reinforce signs that Ankara is taking the Taliban’s threats in stride. Still, there has been little outward sign of progress between Turkish and Pakistani officials that analysts have pointed out could help moderate the Taliban’s stance.

Turkey’s 500 troops in Afghanistan have until now not served in a combat mission, and it remains unclear what support Ankara’s allies will lend to help bolster security at the airport.

The Afghan government announced an air defense system had been installed at the airport this month to defend against rocket attacks. The Taliban have made swift advances across several Afghan provinces, and have been accused of executing prisoners.

The idea to leave Turkish troops at Kabul’s airport to secure international diplomatic missions was raised between Erdogan and US President Joe Biden in Brussels in June.

American and Turkish officials continue to weigh the proposal, including whether other forces will join Turkey’s troops.