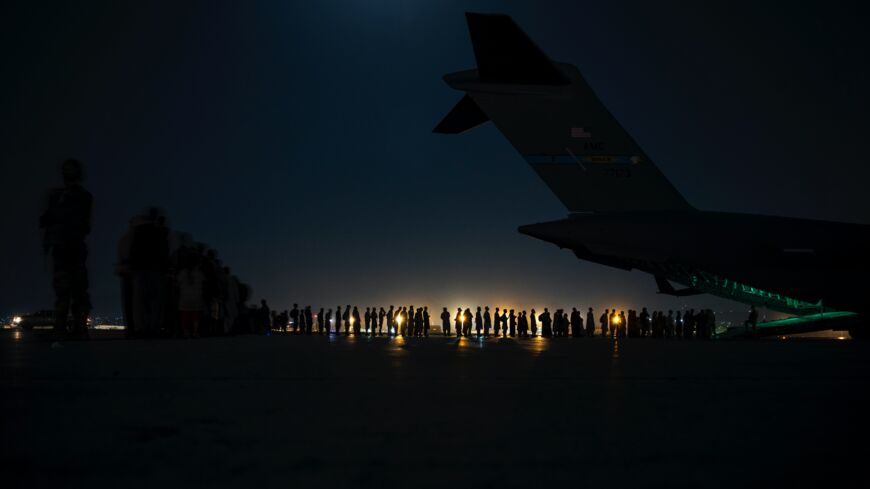 In this handout provided by the US Air Force, an aircrew prepares to load evacuees aboard a C-17 Globemaster III aircraft in support of the Afghanistan evacuation at Hamid Karzai International Airport on Aug. 21, 2021, in Kabul, Afghanistan. - Taylor Crul/U.S. Air Force via Getty Images)

Turkey hasn’t made a decision on whether to help the Taliban operate Kabul’s international airport, Turkish President Recep Tayyip Erdogan said Friday following talks in the Afghan capital between Ankara and the Islamist group.

“We have held our first talks with the Taliban, which lasted three and a half hours,” Erdogan told reporters. “If necessary, we will have the opportunity to hold such talks again.”

“What are their expectations? What is our expectation? You can only know these through dialogue,” he said of the meeting between Turkish embassy officials and the Taliban.

Their meeting came a day after the Islamic State’s affiliate in Afghanistan, ISIS-K, claimed responsibility for the deadly bombings outside Hamid Karzai International Airport. The twin blasts in Afghanistan’s capital city killed more than 100 people, including 13 US servicemembers.

Turkey, which is NATO’s only Muslim-majority member, had previously offered to fully operate Kabul’s airport once the withdrawal of US and NATO forces was complete. But those plans broke down following the Taliban's stunning takeover of Afghanistan earlier this month, and on Wednesday, Turkey announced it would be pulling its 500 to 600 troops from the country.

The armed group, which has demanded Turkish and other foreign troops withdraw, has since requested Ankara’s “technical support” running the Kabul airport after the approaching Tuesday deadline for international troops to withdraw.

“The Taliban have made a request regarding the operation of Kabul airport. They say, ‘We’ll ensure security and you can operate it,'’’ Erdogan said. “But we have not made a decision yet because there is always a possibility of death and such things there.”

Erdogan said his government would make a decision on the airport after the new Afghan government takes shape. He added that Turkey isn’t in a rush to resume commercial flights.

“We will make a decision once calm prevails,” he said.

Erdogan said that evacuations of Turkish servicemembers and citizens will be finished by the Aug. 31 deadline. On Friday, a second plane carrying Turkish troops from Afghanistan landed in the Turkish capital, the Defense Ministry said.