Some Egyptians call for reassessing relations with Russia after it failed to back Egypt's view on Ethiopia's Nile dam at the Security Council this month, although overall ties remain strong. 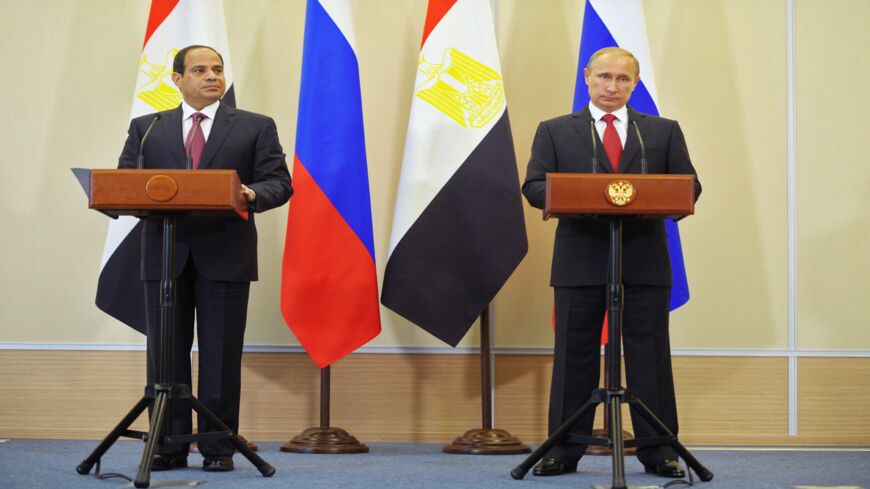 Russian President Vladimir Putin (R) and his Egyptian counterpart Abdel Fattah al-Sisi (L) attend their news conference at the Bocharov Ruchei residence in Sochi on Aug. 12, 2014, during the Egyptian leader's first official visit to Russia. Putin promised Sisi to speed up the delivery of billions of dollars in arms and invited Cairo to forge free trade ties with a Moscow-led customs bloc. - ALEXEI DRUZHININ/AFP via Getty Images

CAIRO — Calls are being made by some in Egypt to reassess relations with Russia, long viewed as an ally of Cairo, amid accusations that Moscow failed to support Egypt's position on the Grand Ethiopian Renaissance Dam (GERD).

The Security Council held a session on the Blue Nile dam July 8 at Egypt's and Sudan's request. The Nile River gives Egypt around 85% of its annual water needs,

Egypt, whose foreign minister held a series of meetings with the representatives of council member states ahead of the July 8 session, expected Russia and other allies to show support for its position on the dam, which it views as an "existential threat."

Russia's representative at the council recognized the political and socioeconomic significance of the dam for Ethiopia in a statement that was perhaps more 'balanced' than Cairo would have preferred.

Vasily Nebenzya also expressed understanding of what he described as the "legitimate concerns" of both Egypt and Sudan regarding the possible negative impact of the dam during dry years in the absence of an agreement.

He called for a negotiated solution to the stalemate over the dam and expressed concern over the escalation of what he called "confrontational rhetoric" among the three states.

"[This rhetoric] is not conducive to finding compromise-based solutions," Nebenzya said. "We are convinced that agreements on socioeconomic development should not lead to threats to peace and security."

The Russian lack of enough support for the Egyptian position on the dam was shocking to many local observers at a time when international positions on this dam are apparently becoming a defining issue for Egypt's relations with the outside world.

Egypt views the GERD as a threat to its existence. The populous country is water-poor already, and the Ethiopian dam project could exacerbate Egypt's water shortages.

Some said Egypt pinned too much hope on the July 8 Security Council session to stop the second filling of the dam until a legally binding deal is reached.

This expectation has come crashing down, and the Egyptians accuse Russia of helping dash their hopes.

"The Russian position [on GERD during the session] was surprising," Emad Eddine Hussein, member of the Senate and editor of the private daily al-Shorouk, wrote July 12. "I call on our government and our president to reconsider our relations with the world."

However, if the Russian lack of support for Egypt on the Ethiopian dam should invite attention to divergence between Cairo and Moscow, it should be noted that the roots of this divergence might have taken place some weeks back.

The same divergence could have major implications for strategic relations and trade, analysts said.

Cairo turned to old comrade Moscow following the army-backed uprising against Islamist President Mohammed Morsi in mid-2013 when Egypt was shunned by much of the world, especially the United States — Egypt's main arms supplier until that point.

"Russia was an important source for arms for Egypt after the US suspended arms supplies following 2013," Tarek Fahmi, a professor of political science at Cairo University, told Al-Monitor. "Russia, along with China and Japan, rescued Egypt from isolation at that time."

In the following years, relations between the Russia and Egypt expanded dramatically and culminated in a comprehensive strategic partnership agreement in October 2018.

At $3.8 billion, trade between Egypt and Russia makes up 83% of the latter's overall trade with Africa and 33% of its trade with the Arab world.

Egypt has bought billions of dollars worth of arms from Russia since 2014, including fighter jets, air defense systems and frigates.

Russia will provide 85% of the $25 billion necessary for the construction of Egypt's first nuclear power plant in the northwestern part of the Arab country, and it will establish an industrial zone in the Suez Canal region that should attract around $7 billion in investments.

The two sides used to coordinate their positions on a large number of regional and international issues, including on Libya and Syria.

"The growth in Egyptian-Russian relations came at a time when Egypt tried to diversify its international relations," Saad al-Zunt, head of the Center for Political and Strategic Studies, a local think tank, told Al-Monitor.

However, the two countries have apparently started going their separate ways, and some analysts refer to Egypt's participation as an observer in the Sea Breeze naval drills, which were held by NATO in the Black Sea in late June, as one reason why Moscow may not be backing Cairo.

Russia has been growing wary of NATO's presence in the Black Sea, and Egyptian participation in the drills must have angered Moscow, analysts said.

Egypt — which made sizable natural gas discoveries off its coast in recent years, is bringing eastern Mediterranean natural gas producers together and processing gas produced in the region at its facilities before exporting it to Europe — supports Europe's quest for non-Russian natural gas supplies.

Moves by Cairo and Moscow following the Security Council session on the GERD point to a real problem in their relations, possible shifts in alliances, and possible political implications, analysts said.

Egypt is drawing closer to Europe as it seeks international support for its position and possible action on the Ethiopian dam.

Russia is coordinating troop presence in Libya with Turkey and adopting the Turkish view that the withdrawal of foreign troops from the North African state should be done step by step, even as Ankara and Moscow support opposing sides in the Libyan conflict.

Egypt, along with several European countries and the United States, advocates the immediate withdrawal of foreign troops from Libya, including thousands of Syrian mercenaries brought to the country by Turkey.

The expectation in Cairo is that the two countries could break up even more as their interests further diverge.

This, analysts said, would have political, economic and strategic implications.

Warmer relations between Egypt and NATO will rein in Russian influence in North Africa and the Eastern Mediterranean as Egypt gets out of the Russian orbit.

"Egypt and the European Union share a lot of interests," Zunt said. "This is why Egypt wants the EU and the US to support it over the GERD, which is an existential issue for it."

Egypt and Russia used to support Khalifa Hifter, the commander of the Libyan National Army who controls most of eastern Libya.

Instead of acting coherently in eastern Libya, the two countries might find themselves vying for influence, analysts said.

Economic relations between the two countries could also be affected, and this could cause deep anger in Egypt, whose economic fortunes turned to optimism after Russian President Vladimir Putin lifted a ban on charter flights to Egypt, six years after it was imposed.

Egypt expects 1 million Russian tourists to visit it after the lifting of the ban, which will compensate for some of the losses the tourism sector sustained because of COVID-19 in the past year and a half.