A former diplomat's suggestion for Egypt to appeal to Israel to help break the deadlock over the Grand Ethiopian Renaissance Dam has sparked controversy in Egypt. 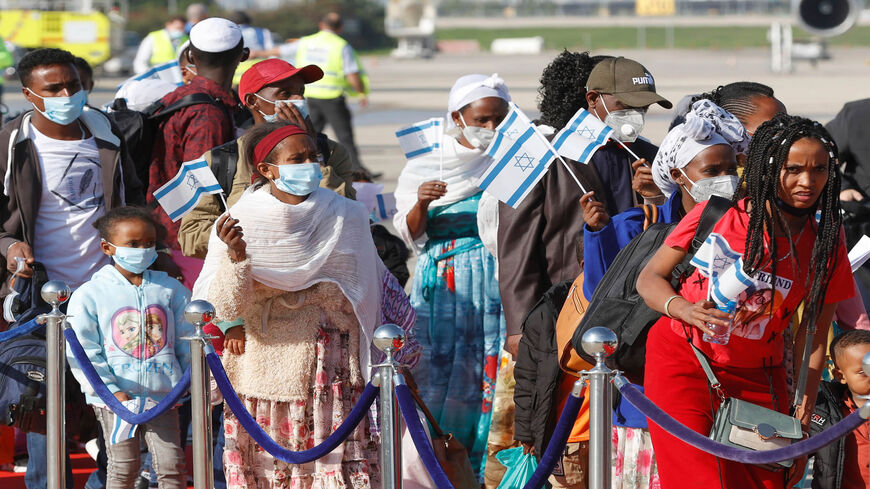 Ethiopian Jewish immigrants are pictured mask-clad as protection against the coronavirus upon their arrival at Ben Gurion International Airport, on the outskirts of Tel Aviv, Israel, Dec. 3, 2020. - Jack Guez/AFP via Getty Images

An Egyptian veteran diplomat’s call to resort to Israel in the dispute over the Grand Ethiopian Renaissance Dam (GERD) raised much controversy and was met with rejection by a number of Egyptian writers and politicians who accused Tel Aviv of supporting Ethiopia in exchange for receiving a share of the Nile River water.

In an interview on TV show “Yahdoth fi Masr” ("Happening in Egypt"), broadcast on the Saudi-owned satellite channel MBC July 13, Moustafa Feki, director of the Library of Alexandria, called on the concerned parties to resort to Israel to resolve the dispute over the GERD, which Ethiopia is building on the Blue Nile, the main tributary of the Nile River, amid the stalled decadelong negotiations on the dam between Egypt, Sudan and Ethiopia.

Feki said Israel has influence over Ethiopia, Russia and the United States, and may therefore hold some sway over the GERD crisis.

He recommended that Cairo resort to unconventional solutions to pressure Ethiopia into reaching a binding legal agreement over water management of the GERD that takes into account Egyptian concerns.

Israel denied accusations of siding with Ethiopia on the GERD crisis. In a July 18 statement issued by the Israeli Embassy in Cairo, Tel Aviv refuted its involvement in the dam crisis, asserting that it stands at an equal distance to all parties to the crisis.

The embassy affirmed Israel has enough water to meet its needs. It continued that the government and people of Israel are concerned with the stability of Egypt and the safety of its citizens.

The continuous attempts of the African Union (AU) since June 2020 to broker a deal to end the stalemate in the negotiations between Egypt, Ethiopia and Sudan over the GERD have repeatedly failed. The last round of talks was in Kinshasa, the capital of the Democratic Republic of the Congo, in April. No agreement was reached on relaunching the negotiations. Rather, the parties exchanged accusations of obstructing talks.

Since then, the hostile diplomatic rhetoric between the three countries has escalated, culminating in a session of the United Nations Security Council July 8 at the request of Egypt and Sudan. The step to take the matter to the Security Council in an attempt to settle the dispute came amid growing fears of a military conflict in an already volatile region.

Days before the Security Council session, Ethiopia had already begun filling the GERD reservoir for the second year. This unilateral move was condemned by the two downstream countries.

On July 19, Ethiopia announced that it has completed the second-year filling target of its huge dam, and the plant may start generating power in the next few months

Egypt and Sudan had their hopes pinned on a Security Council resolution to push for an agreement to resolve the tripartite contentious issues, including an agreement on filling and operating the dam. This did not happen. The permanent members of the Security Council contented themselves with expressing their support for the mediation of the AU to resolve the differences between the three countries.

Meanwhile, the Security Council has yet to decide on a draft resolution submitted by Tunisia calling for a binding agreement between the three countries on filling and operating the dam within six months. The draft provides that Ethiopia shall abstain from unilaterally continuing to fill the GERD. Ethiopia opposes any intervention by the Security Council and considers it as lacking capacity in this dispute.

Rebuking criticism against the proposal to involve Israel in the GERD crisis, Feki argued that there is no idealism in politics and Egypt is paying the price for its extremely idealistic foreign positions.

He also stressed the importance of the AU's demand for Ethiopia to stop unilateral measures and negotiate an agreement within a time period ranging from six months to a year.

Feki noted that the peace agreement signed between Egypt and Israel in 1979 stipulates that neither party will take a hostile action against the other. Given the specificity of Ethiopian-Israeli relations, he reckoned Egypt expected Israel to understand its just demands in the waters of the Nile.

In addition, he called for exploiting the peace agreement, which Egypt has yet to tap into, to serve the just Egyptian stance over the Nile water issue. He believes Israel can pressure Ethiopia in light of their strong historical relations.

Observers believe Egypt is under a water blockade from Ethiopia, with Israel acting as a stout supporter by supplying Addis Ababa with equipment, expertise and defensive weapons in a bid to perpetuate pressure on Egypt. Israel, however, has always denied supporting Ethiopia at the expense of Egypt.

On July 11, Egyptian Foreign Minister Sameh Shoukry met his Israeli counterpart Yair Lapid in Brussels. The meeting took place on the sidelines of Shoukry’s visit to the Belgian capital to hold talks with European counterparts over the GERD, following the Security Council session.

An Egyptian diplomatic source told Al-Araby Al-Jadeed newspaper that the two ministers discussed the GERD crisis. The source said that Israel can use its strong relations with Ethiopia on the one hand, and with the United States and the European Union on the other, to persuade Ethiopia into considering Egyptian concerns about the GERD. The source noted that in return, Egypt would solve the issue of Israeli captives that Cairo is mediating between Tel Aviv and the Palestinian Hamas movement.

In May, Cairo succeeded in brokering a truce in the Gaza Strip that ended the worst outbreak of violence in the region in years between Israel and the Palestinians.

Cairo is also sponsoring indirect talks between Hamas and Israel to conclude a prisoner exchange deal between the two sides, in addition to arranging long-term truce measures between Israel and the Palestinian factions in Gaza.

Tarek Fahmy, a professor of political science at Cairo University and director of the Israeli-Palestinian Studies Unit at the National Center for Middle East Studies, told Al-Monitor that suggesting Israeli mediation to resolve the GERD dispute seems a bit far-fetched. “Israel is part of this crisis due to its support for Ethiopia,” he said. “The unlimited Israeli support for the Ethiopian side through the supply of political and strategic expertise has prompted Addis Ababa to continue its open negotiating approach and to renege on any final commitments.”

Egypt and Sudan, meanwhile, want to reach a legally binding agreement on filling and operating the dam, provided that it guarantees an effective and binding mechanism for settling future disputes. Ethiopia (an upstream country) insists on an agreement that includes nonbinding guidelines.

Ethiopia believes the $5 billion GERD is vital to its economic development and energy savings. But Egypt considers it a serious threat to its supply of the Nile water, on which it relies almost entirely to meet its fresh water needs. Sudan has also expressed concern about the safety of the GERD and its impact on its own dams and water stations.

Fahmy said, “Involving Israel in this matter is not consistent with the facts, as Israel is one of the main forces that backed Ethiopia throughout the dam’s construction journey. Therefore resorting to it or including it in the negotiations at this time would be delusional.”

He added that expanding the negotiation circle to include new parties does not serve the negotiation path because the matter is now in the hands of the Security Council and the AU. “Engaging any other party in the negotiations would be a waste of time and worthless,” he said.

Osman Kagan Yucel, a researcher at the Association of Researchers on Africa (AFAM), told Al-Monitor that Egypt knows Israel has the political capacity to solve the GERD predicament. “In light of the close ties between Israel and Ethiopia and the recent Sudan-Israel rapprochement, Israel could play an efficient role in solving the GERD conflict,” he said.

But Yucel ruled out that Israel would play a role in the conflict. “The new government emerging amid a political and economic turmoil in Israel will focus more on internal affairs.”

He noted, “More importantly, Israel is a party to a water-sharing issue in its own region.” Yucel argued it would prefer not to get involved in the water-sharing problems of other countries or to remain silent. 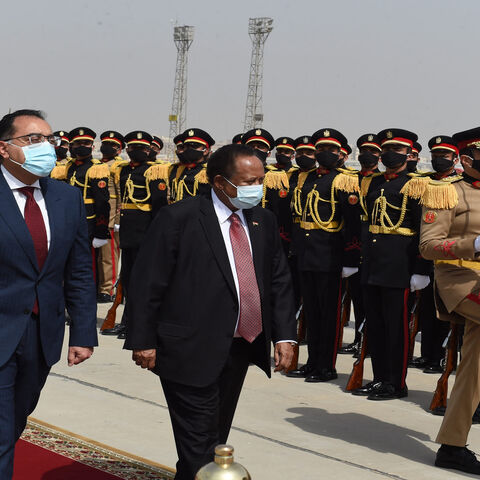 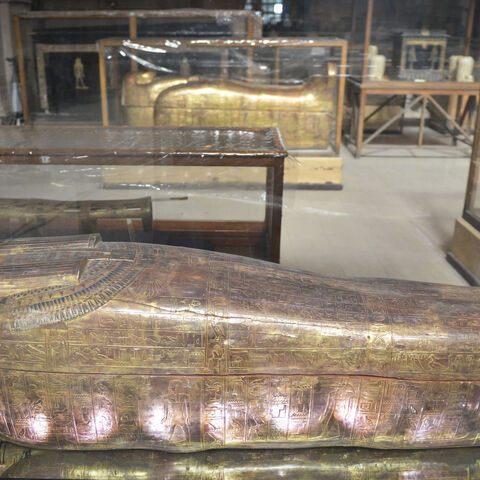 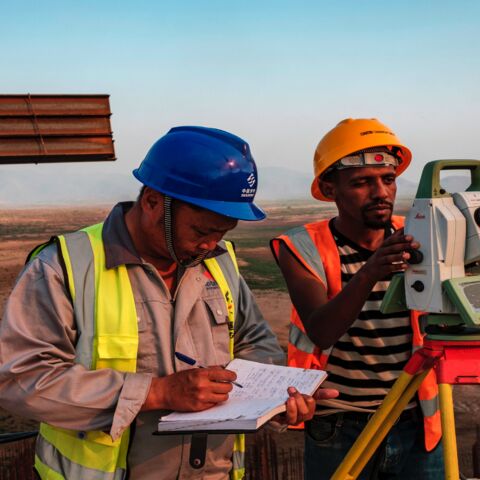