With the prices of houses skyrocketing in the center of Israel, even projects designed for the low-income Arab population of Jaffa have become too expensive for them. 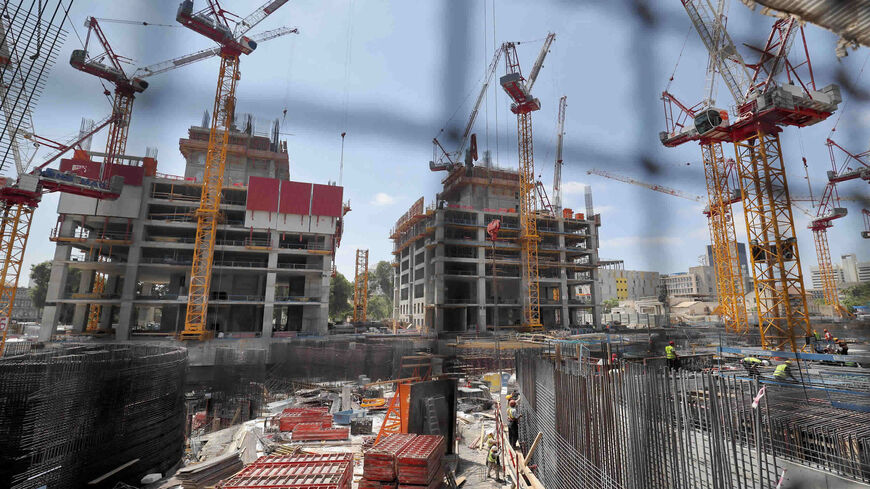 This picture shows a view of ongoing work at a construction site in the coastal city of Tel Aviv, Israel, July 12, 2021. - Emmanuel Dunand/AFP via Getty Images

A district court in Tel Aviv rejected July 25 a lawsuit filed against the Tel Aviv-Jaffa municipality by Jewish residents of Jaffa. The case revolved around a new affordable housing project, open exclusively to Arab residents of Jaffa. The court accept the municipality’s argument that the tender was not discriminatory, since the city had the authority to foster and promote racial equality. In other words, preferential treatment of one sector over another in cases such as this would not be considered discriminatory.

To clarify, Jaffa is an ancient city, with a history dating back to the Middle Ages and even before. Tel Aviv was founded at the beginning of the 20th century. Jaffa is a mixed city, with an important Arab population, while Tel Aviv’s population is mostly Jewish. The two cities touch physically, and in 1949 the government decided to unite them in one municipality. Hence the name Tel Aviv-Jaffa.

The recent ruling first surfaced in late April 2021, when the municipality announced that it was opening registration for a lottery to purchase 28 apartments at a reduced price (30% less than market value) in a new housing project slated for 15 Michelangelo Street, in downtown Jaffa. The authorities went on to say that eligibility for the project, which would be ready for occupancy in 2024, would be limited to Arab residents of the city. The five-story project will consist of 32 three-room apartments with an average size of 65-70 square meters (700-753 square feet). Candidates eligible to purchase the properties would be selected by lottery. The four remaining penthouses would then be sold on the open market. The cost of the apartments is expected to average about 1.5 million Israeli shekels ($460,000), whereas a standard three-room apartment in the neighborhood was recently sold for 2.7 million shekels ($831,000), according to Madlan, an Israeli real estate website that offers information about pricing trends in the surrounding area.

It is worth noting that the aforementioned project first made headlines almost a decade ago, in 2012, when the Tel Aviv-Jaffa municipality released a tender to construct a three-story building of 24 affordable units in Jaffa for eligible residents from the Arab community. When the contract was signed between the city and the contractor in 2016, it was stipulated that the apartments would cost between 700,000 ($215,000) and 1 million shekels ($308,000). Since then, however, the cost of apartments in the area rose drastically. The problem is that this made it increasingly difficult for Arab residents to purchase these apartments, even though they were specifically intended for them.

The city should be congratulated for its decision to promote an affordable housing project for Jaffa’s Arab population. Nevertheless, there can be no doubt that the timing of this lottery raises many questions, not least because the city first decided to move ahead with the project in 2012. What happened since then?

The story can be traced back to last April, when clashes broke out between Jewish and Arab residents of Jaffa, after Rabbi Eliyahu Mali, head of the hesder yeshiva in Jaffa’s Ajami neighborhood, was assaulted. Dozens of Arab demonstrators faced off against dozens of Jewish demonstrators, with the police separating the two groups. At some point, the demonstration became violent. Both sides committed acts of vandalism, and Arab demonstrators chanted, “Settlers, go home!” and “Jaffa for Jaffaites!”

Everyone involved in the situation notes that the background to the tensions between the two communities was a longstanding sense of frustration and anger among Jaffa’s Arab residents toward the city and especially toward Amidar, Israel’s national housing company. They claimed that the authorities sold properties belonging to local residents, who fled or were forced out of Israel in 1948. Most of these properties are now occupied by Arabs, but no matter how long they lived in the properties, they can be evicted from their homes at any given moment. In fact, these residents report that Amidar representatives sometimes show up in their homes with potential buyers without coordinating with them first. Furthermore, these residents are unable to afford the properties, even if they wanted to purchase them.

The situation had gotten so tense that the municipality was forced to intervene. One unnamed senior municipal official told Haaretz last April, “Amidar and the Israel Lands Authority will set the place on fire, with all of us still in it.” Mayor Ron Huldai responded to the riots by saying, “This is not some spontaneous national conflict between Jews and Arabs. What we are seeing is the result of longtime frustration, felt by an entire generation of [Arab] Jaffaites, who can no longer continue to live in Jaffa, because of the housing shortage, sharply rising real estate prices, and the fact that while they are the original inhabitants of the city, they are now being given the choice of either purchasing the homes for a steep price, or leaving.”

Taken together, it is easy to understand the frustration felt by Jaffa’s Arab population. They are no longer able to continue living in the city, even though they are its original residents. This is what lies behind the current affordable housing initiative, even though quite a few Arab residents have told us in advance that they will not be able to afford an apartment for 1.5 million shekels either.

City Council member Abed Abu Shahadeh of the Yafa municipal faction quit Huldai’s municipal coalition last year over construction in Jaffa’s old Muslim cemetery. He told Al-Monitor, “The project is 10 years too late. Back then, there was talk about apartments costing 700,000 to 800,000 shekels on average. The reason that they have been dragging their feet is bureaucracy, plain and simple. It is also what led to such a sharp rise in prices."

He said, "It is true that 1.5 million shekels in Jaffa is considered relatively cheap given the market, but not everyone can afford that either. Nevertheless, I welcome the project, while noting that it is just a drop in the bucket. It will not solve the housing problem faced by Jaffa’s Arab residents. Right now, Amidar controls 1,700 housing units in Jaffa. About 90% of them are occupied by Arabs who can be evicted at any given moment. Despite all my reservations, I see this project as a positive step forward, and there is already talk about other, similar projects in the future.”