Rifaat Turk on Jaffa's Decline As a Bi-National City

From a vibrant bi-national city into gated developments for rich Jews, Rifaat Turk tells Shlomi Eldar all about the recent changes in Jaffa. 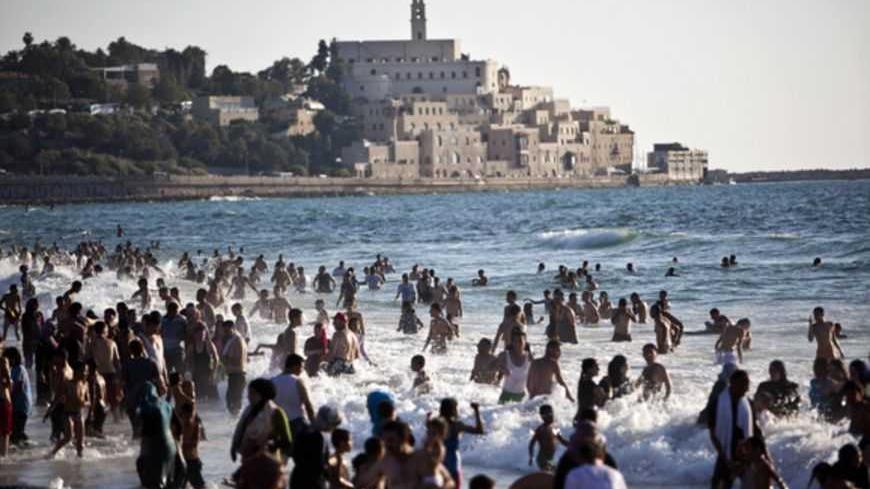 The port of Jaffa is seen in the background as Palestinians enjoy themselves at a beach in Tel Aviv during Eid al-Fitr, which marks the end of the holy month of Ramadan, Aug. 20, 2012. - REUTERS/Nir Elias

"Now that we can put soccer aside, let me show you around Jaffa," says Rifaat Turk as we finish the interview that took place at the Babai restaurant overlooking the Mediterranean. In the first part of the interview, Turk recounted his vast experience on the pitch, particularly his struggle against racism by fans. Not only is Turk the first Arab soccer superstar in Israel but he is also a man with deep political and social involvement and has served on the Tel-Aviv Jaffa City Council. In recent years he has participated in sports education programs in Jaffa's tougher neighborhoods, where kids grow up in conditions similar to the ones in which he was raised, though he was able to get out.

We take his car for a drive through his bi-national hometown that is slowly transforming right before his eyes. Its houses are being increasingly populated by Jews who push Arabs out. They build luxury developments that only Jews can afford (such as Andromeda Hill) and that remain out of reach for the Arab population.

"If you see a big, brand new beautiful house, you know right away that it was bought by affluent Jews. I have no problem with that; on the contrary. Most of my friends are Jewish and I chose them not on the basis of their religion. But look at the trend — when Jews didn't live here, nobody was interested in the Arab residents: no infrastructure, no public parks, no nothing. Now a couple of Jewish families come along, and parks go up in no time. C'mon, does this look right to you? Does it make sense? Is that just?"

Large mansions adorn the gentrifying Jaffa next to small Arab houses. The dichotomy is an eyesore: old versus new; short versus tall; single-story versus multiple-story. It seems that every house is marked by the religion and nationality of the tenant.

The eclectic architecture that was recently introduced by high-end Israeli architects is a blot on the landscape. It seems that everything was designed to raise the eye as high as possible so as not to see the dereliction below, only the sea. After all, this is the reason why Jaffa has become such a lucrative real-estate market.

"Listen, the state of Israel and the Tel Aviv municipality want to get us out of here as quickly as possible, because they've rediscovered Jaffa. Today people sell their property in the affluent communities of Ramat Hasharon and Herzliya Pituach to move to Jaffa. But there's a limit. Look at this — they built a park, but not for us, not for the locals. That's just because five Jewish families moved in. Everything you see here is brand new. Fouad Ben-Eliezer (a veteran Labor Party Knesset member) bought some property here. They do everything to make life hard for Arabs here. We have some 500 to 600 demolition orders, and if you have your own plot and you want to build a house on it — they won't let you. Take the Abu Sayyef family, for example. They have some 60-70 dunams (6 to 7 hectares) — but they can't get permits to build. The same goes for the Daqa family. People have to die here, spit blood before they can build. What do you guys want?"

The Arab residents are in a bind. They have lived in Jaffa for several generations but can't resist the monetary temptation offered by rich Jews. A dunam [around 0.2 acre], or even a smaller plot, can rake in as much as $1 million — a high sum for people who for years have felt deprived. And the writing is on the wall. Within a few years' time, Jaffa will transform from a bustling, colorful bi-national city into an enclave for the top 1%. The Arab residents will be pushed eastward, far away from its seaside streets.

This is the war Turk is waging these days; a war against deprivation, against pushing out Jaffa's veterans, and on behalf of the city as a whole. This is why he turned to politics, right after "hanging up his cleats" and running for the Tel-Aviv Jaffa City Council.

Many people raised an eyebrow when you made this move

"I thought I could make a difference. I ran on the Meretz Party ticket and got into the city council. I served for two terms and on many committees — Education and Culture, Town Building, and Landmark and Commemoration. Back then I came up with a proposal to give the streets in Jaffa Arab names too, not just Jewish ones. Look how warped this is — here's a street whose residents are all Arabs; half of them made the hajj to Mecca, yet their street is named after Rabbi Nachman of Breslov. Does that look right to you? I submitted a request to name Kedem Street that runs along the seafront after Egyptian writer Naguib Mahfouz or the singer Umm Kulthum. I was told: 'Submit a detailed proposal.' It was like a doctoral dissertation."

Turk goes on: "I get to the committee and the chairperson asks: 'Who's in favor of calling Street 571 after Naguib Mahfouz?' I was the only one to raise his hand in favor. Then he asks: 'Who's against?' Eight people raised their hand. Do you get this? And they say that Israel is a democracy. If that's true, it's democratic toward one side only — the Jewish one."

In the end, incidentally, one street was found to bear the name of Naguib Mahfouz. Rifaat Turk smiles bitterly, taking me to see the wonder. As it turns out, this is an alleyway close to a busy road where nobody lives.

Have you thought of running for the Knesset?

“I hate politics. We have a ton of problems, but no Knesset member has come to help us. They come only when the state wants to expropriate land or when they get on TV. They come for the rating and then take off. Other than their seat, they care about nothing else. The Arab Knesset members — even bulldozers won't budge them from their seat. It's all politics and interests.”

Turk remains a big star in Jaffa. Sometimes people come up to him on the street to shake his hand and tell him their problems. We get to the alley where his parents' house is. Here, from the time he was a toddler, he started playing soccer. This is where he dared dream outside Jaffa's borders. Soccer fulfilled his dream. "I hadn't even been once to Haifa by the time I was 10," Turk recounts. "Suddenly I go to Australia, New Zealand. Suddenly I see people leading a normal life. I think life can be awesome here too. Grow up people."

How do you define yourself?

“I'm a Palestinian; a Palestinian who can be a terrific guy. There are a lot of people who tell me 'Drop it; don't say Palestinian. They'll be angry at you. And I always tell them: 'Are you out of your mind?' This is my identity, a Palestinian Arab."

What do you do these days?

“I give talks at Jewish schools, mainly about the relationships between Jews and Arabs, about the situation in Jaffa, coexistence, if there is coexistence."

"There is, but with a lot of problems. You need to work hard to make life better."

So if anyone misses Rifaat Turk, he can console himself knowing that the former soccer player puts his entire energy into his beloved city of Jaffa in order to create a genuine coexistence between Jews and Arabs. And yes, he is still enraged at the fans of Beitar Jerusalem. Even today. Just give him the opportunity and he would be happy to score a goal from across the other side of the pitch with his famous "Rifaatrocket" — just to show them that soccer beats racism.