Several provinces are facing a worrisome resurgence at a time of confusion, disorder and stoppages in the nationwide vaccination program. 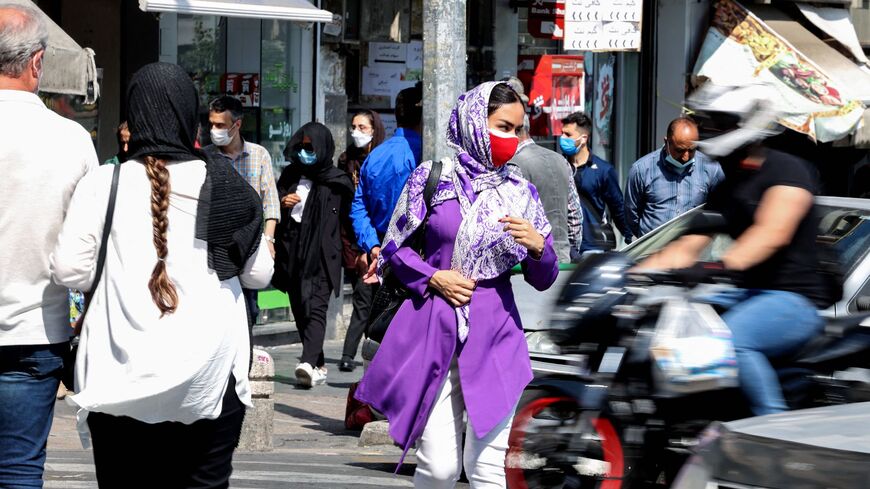 People, mask-clad due to the COVID-19 pandemic, walk at Enghelab Square in the center of Iran's capital Tehran on May 16, 2021. - ATTA KENARE/AFP via Getty Images

Iran's health officials said multiple variants of the COVID-19 virus are raging across four southern provinces up to 50% faster than two weeks ago. The rates have now placed much of the country's impoverished southern and southeastern strip in the country's "red" infection zone.

Iran's health minister has already warned that the "stubborn" nature of Indian and South African mutations identified in various locations nationwide could further complicate the country's pandemic control policies. An alarm has also been sounded on the situation in the capital Tehran, where coronavirus-related hospitalizations are back on the rise following a brief respite.

According to an estimate by the Tasnim News Agency, overall nationwide infections have witnessed a 113% jump in the past few weeks. Such figures, the report says, could herald a looming crisis or what health experts had earlier cautioned could become a fifth and most lethal peak of the pandemic.

Iran introduced a vaccination rollout in February but as of June 21, only five million doses have been delivered to a population of 85 million. The piecemeal program has been halted over the past few weeks, leaving elderly citizens above the age of 70, who are now eligible to receive doses, unable to find them.

The disorderly distribution has also seen long queues at crowded centers with poor social distancing in place, some vaccine-seekers even staying overnight only to be turned away due to lack of supplies. Two pictures comparing a neatly organized vaccination center in the Austrian capital Vienna with one in Tehran went viral among Iranian users who expressed frustration at the Iranian government's treatment of its senior citizens.

Iran has also been pursuing multiple homemade vaccine projects. The leading one is COVIran Barekat, spearheaded by a state-owned entity controlled by the office of Supreme Leader Ayatollah Ali Khamenei. The vaccine has already received authorization for emergency distribution. But ever since it took up the project, the enterprise has faced criticism over its perceived monopoly and intentions to profit from a public health issue. Following an agreement with Iran's Health Ministry this week, the center is expected to be paid around $9 per dose of its product, a rate more than four times higher than what Iran has been paying for the AstraZeneca vaccines imported in recent months.

Iran has been blaming its sluggish vaccination in part on the failure of some foreign countries to deliver the purchased doses. It has also traced roots of the problem to international banking restrictions. Yet Energy Minister Reza Ardakanian announced June 22 that his country has managed to reclaim some $163 million in debts from Iraq to pay for 16 million doses of vaccines from the UN vaccine initiative known as COVAX.

Iran's pandemic control has from day one been associated with controversy, contradictions, and twisting policies, as every now and then restrictions are eased for religious or political reasons. The latest upsurge in infections follows the country's presidential election. The campaign period saw the frontrunner and now President-elect Ebrahim Raisi deliver fiery speeches in several impoverished cities to crowds of loyalists with no visible coronavirus-related protocols enforced.