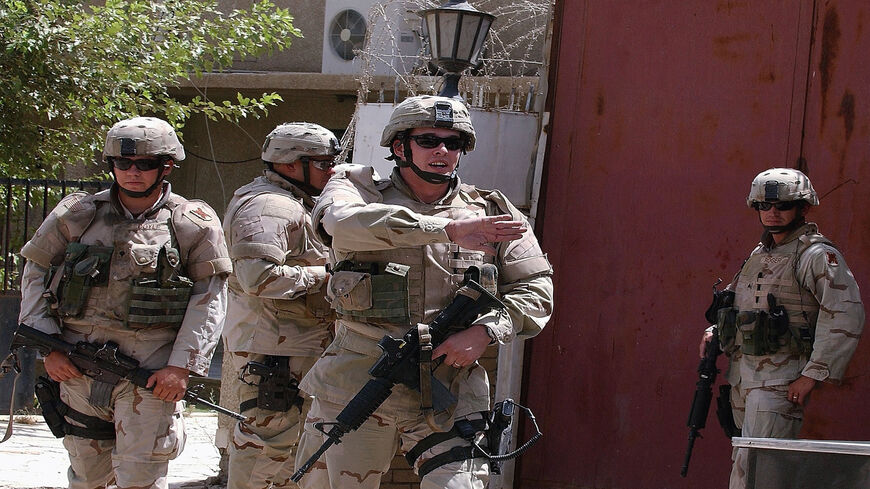 The United States announced a $3 million reward for anyone who has information about attacks on diplomatic missions in Iraq.

The news agitated armed groups opposed to the US presence and linked to Iran.

In response, these militias, which operate outside of the direct control of the Iraqi security services, escalated their campaign against the presence of US forces in Iraq.

In response to the reward, Qais Khazali, secretary-general of Asaib Ahl al-Haq, which is designated by the United States as a terrorist group, said June 14 that the decision for escalation in targeting the US forces has been made and will continue until they are officially out.

Khazali’s threats are in line with what the adviser of a leader of one of the main armed Iraqi factions told Al-Monitor, “Our strikes in the coming days will have specific targets, which we have carefully picked.”

Al-Monitor asked the adviser about the mechanism of the planned attacks — whether they will use drones or missiles, or other techniques. He answered, “Wait and see.”

On June 10, Asaib Ahl al-Haq launched a missile attack on an air base in Salahuddin governorate, where several some US consultants are positioned. After about an hour, they launched another attack on Camp Victory army base in Baghdad using three drones. The factions are adopting this new mechanism to target the US forces and the international coalition.

US-led coalition forces operate in Iraq based on a request from former Iraqi Prime Minister Nouri al-Maliki in 2014, after Islamic State (IS) forces had seized Mosul and large parts of Iraq and Syria, and threatened to overrun the country.

Some Iraqi officials and foreign diplomats worry that the US forces’ drawdown could increase the risk on Western diplomatic missions in Iraq.

The Fatah Alliance, which is led by Hadi al-Amiri and is close to Tehran, has doubts about the US forces’ intention to leave Iraq and about the strategic dialogue between Baghdad and Washington in this regard. Ayoub al-Rabei, deputy of the alliance, said, “Some points that were agreed on in the dialogue have been changed.”

The Iraqi government considers US-led coalition forces in Iraq as a key partner in combatting terrorism and providing training.

The May 10 meeting between Prime Minister Mustafa al-Kadhimi and Gen. Kenneth F. McKenzie confirmed the above, as it did not mention expelling the US forces, but the international coalition forces only.

Akil Abbas, assistant professor at the American University of Iraq - Sulaimaniyah, told Al-Monitor, “Expelling the US forces is not an issue that the factions will monopolize. None of the Iraqi parties will single-handedly handle expelling these forces. The Iraqi army wants the US forces to stay, in addition to other political groups.”

He said, “Everything that is happening is a dispute over specific issues between the factions and the government. I do not think the government will oust the US forces in the absence of huge political support, which in fact does not exist. There is actually an opposite inclination."

What proves that these factions are serious in escalating against the US forces is their announcement May 22 of the establishment of the Iraqi Resistance Coordination Commission. They said, “The outcome of the two negotiation rounds [on the strategic dialogue] with the United States is not acceptable in any way. It was just a stalling method.”

On June 5, the first meeting was held between the Iraqi Military Technical Committee led by Joint Operations Deputy Commander Lt. Gen. Abdul Amir Shumari and its American analogue led by the Combined Joint Task Force Commander, Operation Inherent Resolve, Lt. Gen. Paul Calvert. They tackled the deployment of the combatant forces of the international coalition outside Iraq. The statement of the government’s security media cell did not mention anything about the expulsion of the US forces.

Meanwhile, the Iraqi government seeks to manage the continued coordination with US-led coalition forces, which it considers key to continued progress against IS, and for training to improve Iraqi security forces' capabilities, while addressing the demands of some of the Popular Mobilization Units for them to leave.