The Tunisian Parliament is once again considering legislation to make normalization with Israel illegal. 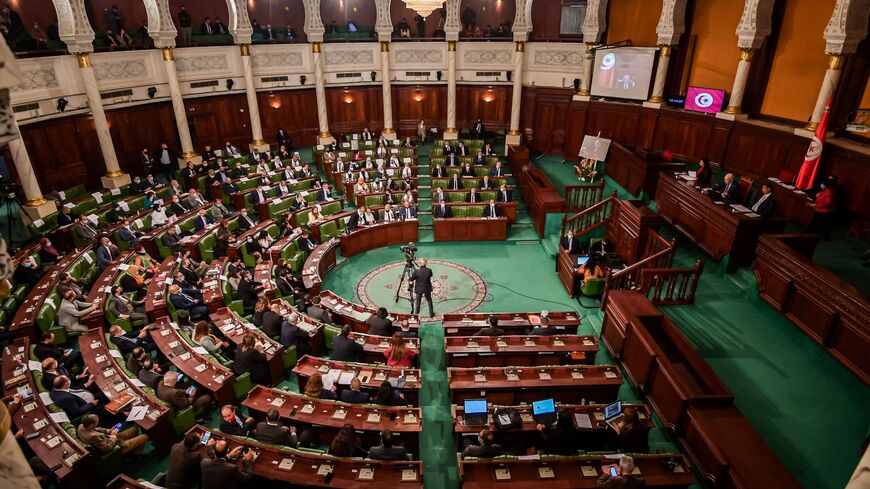 Tunisian lawmakers debate ahead of a confidence vote on the new government reshuffle by Prime Minister Hichem Michichi at the Tunisian Assembly in the capital Tunis on Jan. 26, 2021. - FETHI BELAID/AFP via Getty Images

TUNIS — The Tunisian Parliament asked the parliamentary Freedom, Rights, and Foreign Relations Committee to examine a bill criminalizing the normalization of relations with Israel on May 21. In a May 18 general session, most parliamentary blocs demanded such legislation in the wake of the Israel-Gaza fighting and the recent developments in the Palestinian territories.

Badr al-Din al-Qamoudi, head of the parliamentary Administrative Reform, Good Governance and Anti-Corruption Committee, told Al-Monitor that the Freedom, Rights, and Foreign Relations Committee is still discussing the bill with the various political parties. Once discussions are completed, the committee will refer the bill to parliament, he said.

During his visit to Brussels on June 3 and 4 on the sidelines of the second European Union-Tunisia Association Council meeting, Tunisian President Kais Saied said that “regimes choose whatever they want,” when asked for Tunisia’s take on some Arab states’ establishment of official and diplomatic ties with Israel.

In an interview with Euronews in Brussels released on June 5, Saied said, “We deal with states, and regimes make their own choices. We never interfered. They are free, but we are free as well. We have lived free, and we want to die free.”

In a first comment from the Tunisian government on Morocco’s normalization of ties with Israel, Tunisian Prime Minister Hichem Mechichi said in an interview with France24 back on Dec. 14, 2020, that Tunisia is not concerned with other countries' normalization with Israel and its stance is not affected by changes in international relations. Each country has its own reality, situation and diplomacy as it sees best for its people, he said, adding that the US administration did not raise this issue with him.

In 2015, the Popular Front (a leftist party) drafted a bill to criminalize normalization with Israel, but the legislation did not make the agenda of the parliament’s General Legislative Committee. The bill included six chapters criminalizing all political, diplomatic, economic and cultural dealings with Israel and punishes offenders with a prison sentence of two to five years and a fine of 10,000 to 100,000 Tunisian dinars ($4,000 to $40,000).

In January 2014, as Tunisia's new constitution was being ratified, a bill was put forward to amend the constitution’s preamble — which already included opposing all forms of colonization and of racism. The amendments called for criminalizing normalization with Israel.

But the bill failed to secure the votes needed to pass. Most of those who had reservations were affiliated with the Ennahda movement.

Meanwhile, the parliamentary Jerusalem and Palestine Committee has not been active since its inception in 2018.

Echaab (The People’s) Movement head Zuheir al-Maghzawi told Al-Monitor that the bill to criminalize normalization is needed amid the current wave of normalization in the region. It is a popular demand and a form of support for the Palestinian people to defend their rights, he said, adding that the international forces supporting Israel are pressuring Tunisia not to enact the law.

He accused Ennahda, which has the largest parliamentary bloc, of preventing Tunisia from passing the bill.

Qamoudi said he hopes that the parliament votes to criminalize normalization with Israel in support of the Palestinian cause. He accused Ennahda of obstructing the passage of the 2015 bill by refusing to take part in the parliament discussions.

The head of the National Commission for Support of Resistance and Against Normalization and Zionism, Ahmed al-Kahlawi, told Al-Monitor that during the rule of the troika government in 2014, the Constituent Assembly (formerly parliament) approved a request by his association and others to include in the constitution text criminalizing normalization with Israel. “But we were surprised that the chapter was deleted, as well as all references to normalization, from the new version of the constitution and were replaced with a simple sentence in the preamble confirming support for liberation movements in the world, including the Palestine Liberation Movement.”

He added, “The Tunisian stance must support the Palestinian cause as a just humanitarian cause.”

In February 2020, Tunisia fired its ambassador to the United Nations, Moncef Baati, five months after he took the helm of the diplomatic mission in New York. The Tunisian presidency accused him of supporting Palestinians at the expense of Tunisia’s relations with the United States. The move came amid disputes between Baati and the president over the US peace plan.

Back in March, Kamal Riahi, the director of the House of the Novel, an institution affiliated with the Tunisian Ministry of Culture, stirred controversy with a Facebook post boasting of an article in Yedioth Ahronoth that mentioned his novel “Al-Mashrat” ("Scalpel"). The League of Free Tunisian Writers expressed shock at Riahi’s post and called on Tunisian writers to remove Riahi from his position. Riahi later deleted his post.