The Democratic representative said that domestic courts are insufficient to prosecute crimes against humanity, but her reference prompted criticism from some of her Democratic House colleagues. 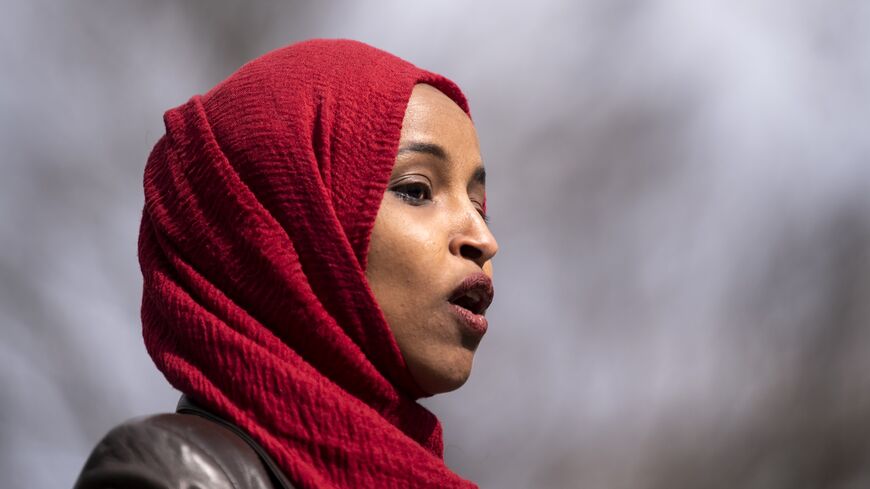 Democratic Rep. Ilhan Omar of Minnesota speaks during a press conference at a memorial for Daunte Wright on April 20, 2021, in Brooklyn Center, Minnesota. - Stephen Maturen/Getty Images

A Minnesota congresswoman compared the United States and Israel to Hamas and the Taliban this week, sparking a Democratic Party Twitter war.

On Monday, Democratic Rep. Ilhan Omar of Minnesota questioned US Secretary of State Antony Blinken during a House Foreign Affairs Committee hearing. She argued that domestic courts are insufficient organs to prosecute crimes against humanity. She cited alleged crimes committed by Israel, Hamas, the Afghan government and the Taliban as examples. Omar then pressed Blinken on his views on the International Criminal Court at the Hague and its potential role in such cases.

Omar posted a video of her remarks to Twitter the same day.

“We have seen unthinkable atrocities committed by the U.S., Hamas, Israel, Afghanistan, and the Taliban,” she said in a tweet, adding that she asked Blinken “where people are supposed to go for justice.”

Twelve of Omar’s Democratic House colleagues criticized her for the comments, saying she equated the United States and its ally Israel to Hamas and the Taliban.

They added that they wanted Omar to “clarify” her remarks.

The lead author of the letter was Rep. Brad Schneider of Illinois; other signers included Reps. Brad Sherman of California, Elaine Luria of Virginia and Ted Deutch and Debbie Wasserman Schultz of Florida.

The letter prompted Twitter spats among Democrats in the House. Members of the self-described “squad” of progressive representatives defended Omar on Thursday.

"Their obsession with policing her is sick,” said Rep. Rashida Tlaib of Michigan in a tweet. "She has the courage to call out human rights abuses no matter who is responsible.”

Rep. Alexandria Ocasio-Cortez of New York tweeted that she was “tired” of Democrats criticizing Omar, referring to their comments as “constant vilification, intentional mischaracterization, and public targeting.”

Rep. Cori Bush of Missouri called the attacks on Omar “Islamophobia” in her post on the social media site.

Omar also defended herself on Twitter on Thursday, referring to the letter as containing “Islamophobic tropes.” She later clarified her original comments on Hamas and the Taliban, however, saying she was not comparing the two groups to democratic states.

“I was in no way equating terrorist organizations with democratic countries with well-established judicial systems,” she said in a Thursday statement.

Her comments were about the International Criminal Court and did not constitute a “moral comparison between Hamas and the Taliban and the U.S. and Israel,” she said.

The controversy reflects growing division within the Democratic Party on foreign policy, particularly regarding the Israeli-Palestinian conflict. Last month's war between Israel and Hamas further exposed the split between older Democrats such as President Joe Biden, who support Israel, and younger members of Congress who are further to the left and identify with the Palestinian cause.

Omar, who is Muslim, is a controversial figure in the Democratic Party in part for her support of the Palestinians and criticism of Israel. The comments she made to Blinken questioned whether Palestinians could reliably seek justice in Israeli courts for crimes committed by the state.