A cluster of police suicides in Turkey last month highlights a crumbling brotherhood and lack of organizational support. 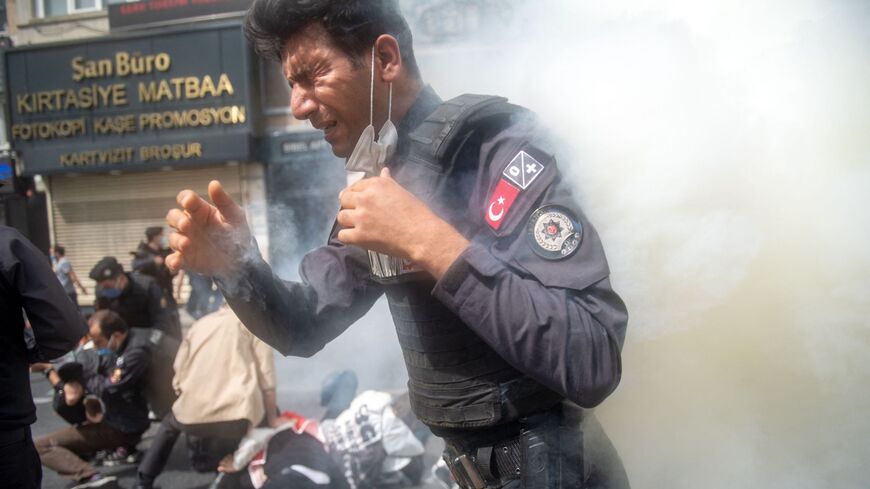 A Turkish police officer stands in a cloud of tear gas after he accidentally let off a canister during a May Day rally marking the international day of the worker in Istanbul, on May 1, 2021. - BULENT KILIC/AFP via Getty Images

Yet the document seemed mostly concerned with public relations, comparing police suicide rates in Western countries with those in Turkey. “From 2010 to 2020 our personnel has grown 43.5%, but our suicide numbers remained the same,” it said.

Emniyet-Sen is a defunct association that had fought for law enforcement labor rights. Its former chair, Faruk Sezer, told Al-Monitor that according to their information, in the last 30 years 1,300 officers died by suicide. He added that the numbers are in line with those provided by EGM, adding up to 70 suicides annually in the force.

Murat Bakan, a lawmaker in the main opposition Republican People’s Party, has been voicing the grievances of law enforcement officers including poor management in the parliament for months. Bakan has submitted parliamentary inquiries to Interior Minister Suleyman Soylu. In mid-March, a 28-year-old officer died by suicide. He was stationed at the Presidential Protection Directorate and had left a heart-rending note describing a cruel work environment, including humiliation and threats from his superiors. “Every man has his pride, and I could not stomach these words,” his note said.

Bakan named two other officers who were killed by suicide in 2021 in his written inquiry asking the interior minister if there had been an investigation into the late officer’s claims. Bakan explained that the junior officers had left behind suicide notes blowing the whistle on systemic abuse and harassment. If there are no investigations, he asked, how can other officers be protected?

A 32-year-old police officer from Ankara told Al-Monitor, “There are many days I contemplated suicide. We all suffer from sleep deprivation. Our superiors ran us around like personal servants. I pick up their groceries, drive their kids and serve coffee. Plus, verbal aggression and threats create an insecure and uncertain work environment. If your superior officer complains about you with suspicion of being FETO [a member of the Fethullah Gulen movement, which the Turkish state considers a terror organization], your life is over. We are regularly harassed by my superiors, their powerful friends and scorned by the public. Do you think my kids are proud that their dad is a police officer? I do not think so. … We are overworked, underpaid and constantly on edge.”

Talking to 12 retired and active-duty police officers in Turkey, Al-Monitor observed that most officers reported experiencing numerous instances of trauma from which they have no time and support to recuperate. The trauma is often job related but also coupled with bullying in they refer to as “mobbing by AKP-appointee superiors.” The politicization of the force, they say, has created a toxic work environment.

All too often, suicide becomes the result of this torment.

For example, in March a 46-year-old officer died by suicide. His superior officer accused him of stealing his sunglasses. Officer was questioned over the theft and his house was searched. He had served in the force for 21 years at the time of his suicide. In the end, the superior officer’s sunglasses were found in the office kitchen.

Turgay Karagoz, a professor of criminal justice at Minot State University in North Dakota, told Al-Monitor law enforcement officers everywhere are at high risk to suicide because of ready access to firearms. Karagoz, who served as a sergeant and lieutenant at Istanbul Police Department between 2004 and 2012, before being fired by presidential decree like thousands of other officers, spoke candidly about his professional and personal observations.

“In the Turkish law enforcement structure, if you are not a part of a group, a power center, you will be isolated. Unfortunately, there is no system of merit. All relocations and assignments are managed on an arbitrary basis. It is up to the superior officers. An honest and hard-working officer might be left to serve in a deserted or high-risk location for decades if he lacks the proper network, while a crooked cop might reach top positions. For example, the mafia boss Sedat Peker mentioned Hakan Caliskan, police chief of Istanbul’s Silivri district, who was killed by suicide. Caliskan ended up in the middle of a political battle between Interior Minister Soylu and his own superior.”

Karagoz analyzed this high-profile suicide as a part of a pattern he has observed in the Turkish police force, which unlike Western countries, does not have unions. “While the Interior Ministry asked for the minister's son’s friend to be released from jail promptly, his superior ordered the late police chief to keep the suspects in jail. The police chief was left in a lose-lose situation. I witnessed these kinds of practices frequently.”

Police officers are under pressure not just from their colleagues but also political elites. The question “Do you know who I am?” has become their nightmare. If they fail to recognize a prominent figure or one that is connected to an important person and give them VIP treatment, they may end up being investigated or demoted. In 2012, an AKP lawmaker’s son complained about an officer and several were put in a line-up. Several police officers were then prosecuted and were given jail terms. These kinds of humiliations have become routine over the last decade.

A psychologist from Istanbul who has worked with law enforcement for decades told Al-Monitor, “Mobbing and uncertainty is the killer. The fear that you might be declared a terrorist is crippling. There is unprecedented pressure and scrutiny since the 2016 coup attempt. What I see in the last decade is the erosion of that brotherhood solidarity. Every officer is on his own now.”

The feelings of isolation, combined with high levels of uncertainty and suspicion within the ranks and work-related stress regarding their reception in the community, contribute to gradually deteriorating mental health.

Sezer, who pioneered the establishment of Emniyet-Sen in 2012, explained that his struggle to unionize officers led to 10 different investigations. Although he is determined to create a functioning police association, currently there is none. With police officers not allowed to unionize, there is no organization to champion their rights, salaries or legal grievances. Sezer explains that the elimination of basic rights means there is no uniformity in work conditions. Some officers may work 400 hours a month and still get the same pay as those who work 160 hours. Some officers are forced to work 12-hour shifts on their feet. The inhumane work conditions also destroy many officers' family life. Sezer and other officers agree their work schedule is dangerous for the well-being of the officer, his colleagues and the people they serve.