Princess Latifa has alleged in secret video recordings that her family is holding her captive and she fears for her safety. 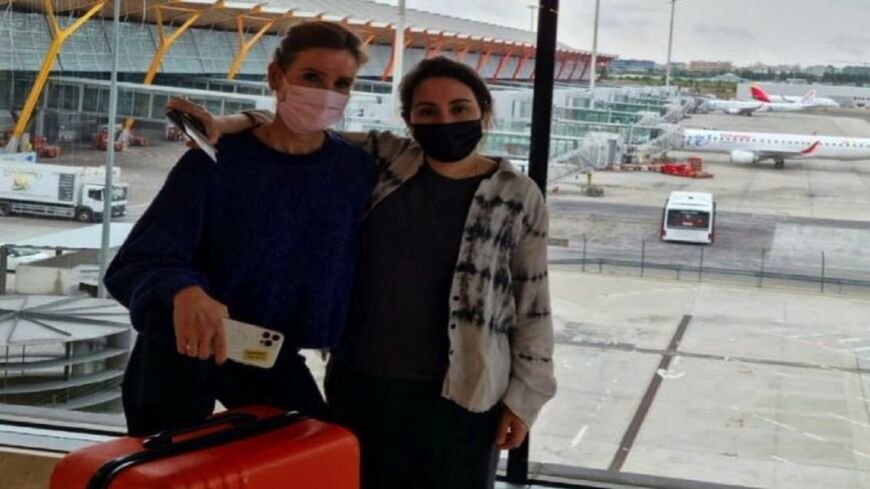 A photo showing Princess Latifa on an apparent vacation in Spain has emerged months after the daughter of Dubai's ruler alleged in secret video recordings that she was held captive by her father.

The photo casts doubts on allegations of ongoing house arrest, and has resulted in a campaign for her release being suspended.

A new Instagram photo showed 35-year-old Latifa and a Dubai-based teacher named Sioned Taylor wearing face masks and posing for the camera at an airport in Spain. The photo posted to Taylor’s account included a caption that read, “Great European holiday with Latifa. We're having fun exploring!”

Asked in the comments whether the princess is okay, Taylor replied, “She is great,” along with a “thumbs up” emoji.

In February, the BBC’s “Panorama” program aired a series of videos during which Latifa claimed to be held “hostage” in a villa “converted into a jail” without access to medical help or the ability to get fresh air. In videos, which were reportedly filmed on a smuggled cell phone from inside a locked bathroom between early 2019 and early 2020, Latifa says she fears for her safety.

Latifa is a daughter of Sheikh Mohammed bin Rashid Al Maktoum, who is both the billionaire ruler of Dubai and prime minister of the United Arab Emirates.

After the United Nations’ human rights agency asked the Emirati government for proof that Latifa was alive, the UAE released a statement in February saying she was being “cared for at home” by family and medical professionals.

Last month, Taylor posted photos showing Latifa at a mall and restaurant in Dubai. Citing a source close to her, The Guardian reports that Taylor, a British teacher, was at first a chaperone for Latifa but the two grew closer before the princess’ failed attempt to flee the country in 2018.

David Haigh, co-founder of the Free Latifa campaign and Detained International, said in a statement his organization was putting its campaign on hold in light of the developments.

“We are no doubt joined by tens of thousands around the world [who] supported Latifa these last three years when we say we are pleased to see Latifa seemingly having a passport, traveling and enjoying an increasing degree of freedom; these are very positive steps forward," he said.

"I can also confirm that several of the campaign team have been contacted directly by Latifa. We cannot comment further at this stage, save to say that our only goal is to secure the present day and future safety and well-being of Latifa, and that we are currently, and have been since May, seeking guarantees in that regard," he said.

In addition to Latifa’s alleged detention, her older sister Sheikha Shamsa bint Mohammed Al Maktoum, has alleged that Sheikh Mohammed ordered her own forced disappearance in 2000. In March 2020, a UK judge ruled he had ordered the kidnappings of both Latifa and Shamsa, as well as a campaign of intimidation against his wife.

The youngest of Sheikh Mohammed’s six wives, Princess Haya of Jordan, left her husband and fled to London with the couple’s two young children in April 2019 after reportedly fearing for her life in Dubai.