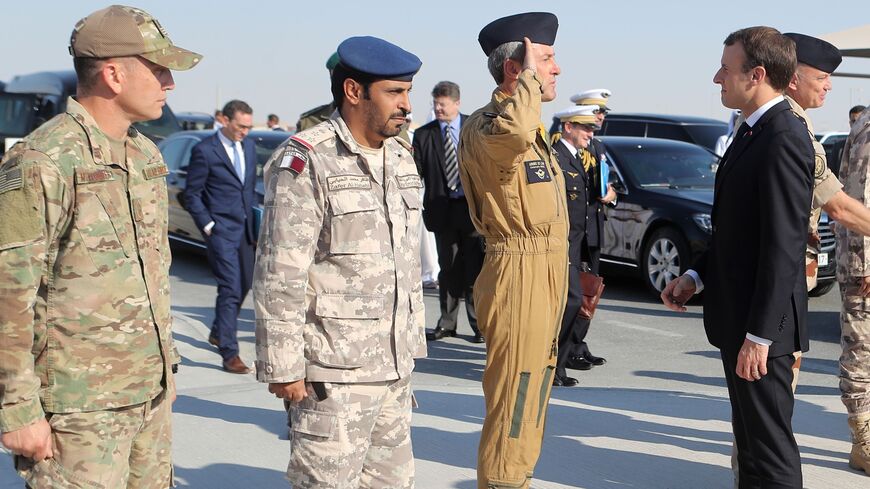 Could Qatar's Al-Udeid Air Base be used to train Afghan troops? Here, French President Emmanuel Macron (R) is greeted by US, Qatari and French armies' commanders upon his arrival at the base in the Qatari capital, Doha, on Dec. 7, 2017. - KARIM JAAFAR/AFP via Getty Images

Officials under NATO’s authority are seeking Qatar’s permission to use a military base to train Afghan special forces following the US and NATO withdrawal from Afghanistan, Reuters reported.

"We are holding talks to earmark a base in Qatar to create an exclusive training ground for senior members of the Afghan forces," a senior Western security official in Kabul told Reuters.

"We have made an offer but it is for authorities in Qatar to decide if they are comfortable with NATO using their territory as a training ground," a second source based in Washington reportedly said.

Reuters did not specify which site was requested, if any. The United States maintains more than 10,000 troops at the Al-Udeid Air Base in Qatar.

The reported talks are the latest sign of the United States' and NATO’s continued support for Afghan security forces beyond the looming withdrawal, which is to take place by Sept. 11.

The United States, Britain and Turkey are among the NATO countries prepared to send military trainers to Qatar to assist the Afghan forces, according to the report.

The US military has ruled out the possibility of continuing airstrikes in Afghanistan in support of the Afghan national army, VOA News reported Monday. Still, both the United States and NATO have said they will continue to fund and train Afghan forces, who have been losing ground to the Taliban lately.

NATO Secretary-General Jens Stoltenberg said earlier this month that the alliance was looking at options to train Afghan forces outside of the country, “especially the special operations forces.”

The Biden administration, meanwhile, is in talks with Turkish officials over leaving Turkish troops to secure Kabul International Airport. The United States has said that keeping a diplomatic presence in Afghanistan depends on having a secure airport.

The Pentagon wants to continue “over-the-horizon” operations to target Islamist extremists in Afghanistan deemed to pose a threat outside of the country, but has not yet secured long-term basing in the region for such operations.