Ankara could leave some troops in Afghanistan if Washington provides support. 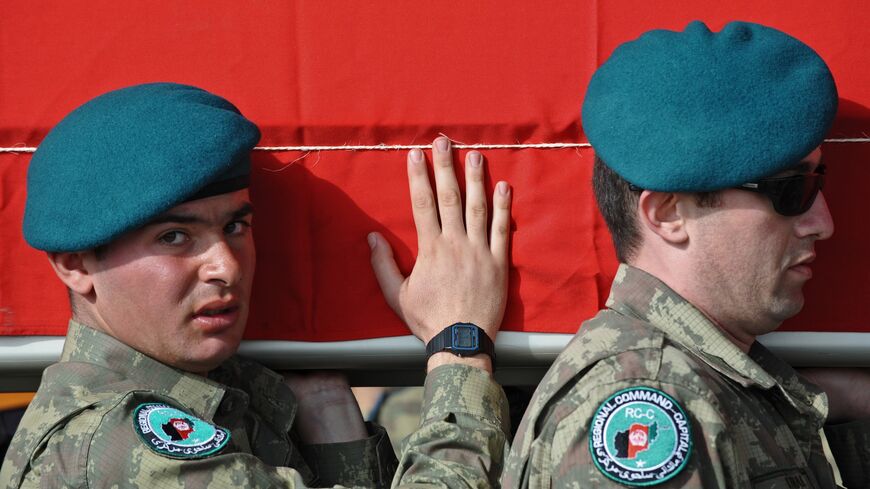 Turkish soldiers march while bearing the coffins of their fallen comrades, killed in a helicopter crash, during a ceremony at Kabul International Airport on March 17, 2012. A Turkish helicopter had crashed into a house on the outskirts of Kabul the day before, killing 12 Turkish soldiers and two Afghan civilians. - MASSOUD HOSSAINI/AFP via Getty Images

The Biden administration continues to talk with Turkish officials about Ankara’s proposal to take over security at Kabul International Airport after US and NATO forces leave Afghanistan later this summer.

Pentagon spokesman John Kirby told reporters Wednesday that he could not confirm those requests, but said to Al-Monitor that talks about the proposal continue.

US officials “have had ongoing discussions with Turkish leaders about their plans for security at the airport,” Kirby said, adding, “Obviously, this is a national decision that President Erdogan has to make and we respect that.”

“Security at the airport in whatever form … is going to be important not only for the United States, but for other nations to be able to maintain a diplomatic presence there in Kabul,” Kirby said.

Turkish officials expressed openness to the idea in principle during a NATO summit in Brussels last month.

Why it matters: The move could provide an opportunity to lay a stepping stone on the long path toward restoring close relations between the two allies.

The two have so far proven unable to compromise on disputes over US support for Kurdish-led fighters in Syria, whom Turkey considers terrorists, or on Ankara’s purchase of Russia’s S-400 air defense system, which the United States says could pose a threat to the alliance’s aircraft.

What logistical support the United States and NATO may be able to offer remains unclear. The Pentagon does not yet have a clear picture of what its capabilities in Afghanistan will be after withdrawal.

US officials are still seeking access to military bases in regional countries to continue “over-the-horizon” counterterrorism operations in Afghanistan. Officials have said Washington will only leave a small contingent of forces to secure the US Embassy in Kabul.

Reuters cited US officials as expressing some skepticism about the US ability to support the Turkish plan, but US officials are clearly open to engaging on the issue, as Kirby made clear Wednesday.

Turkey’s government had initially said it would remain in Afghanistan following the NATO departure. But officials in Ankara backtracked on that idea last month, raising concern among NATO member states who had hoped to leave embassies in the Afghan capital.

The Taliban have made startling gains against local security forces as Western forces withdraw their troops from the country. Some 150 members of the Afghan security forces were killed or wounded in attacks across the country in just 24 hours earlier this week, Afghan officials said.

What’s next: Biden is set to meet Erdogan at the NATO summit in Brussels on Tuesday to discuss an array of issues, ranging from Turkey’s potential future role in Afghanistan to Syria, Iran and tensions in the eastern Mediterranean.

National security adviser Jake Sullivan said the president will seek ways forward on the two countries’ “significant differences on values and human rights” and that Biden looks forward to the opportunity “to review the full breadth of the relationship.”