Foreign Minister Yair Lapid has inaugurated Israel’s embassy in Abu Dhabi, his first task in his historic visit to the United Arab Emirates. 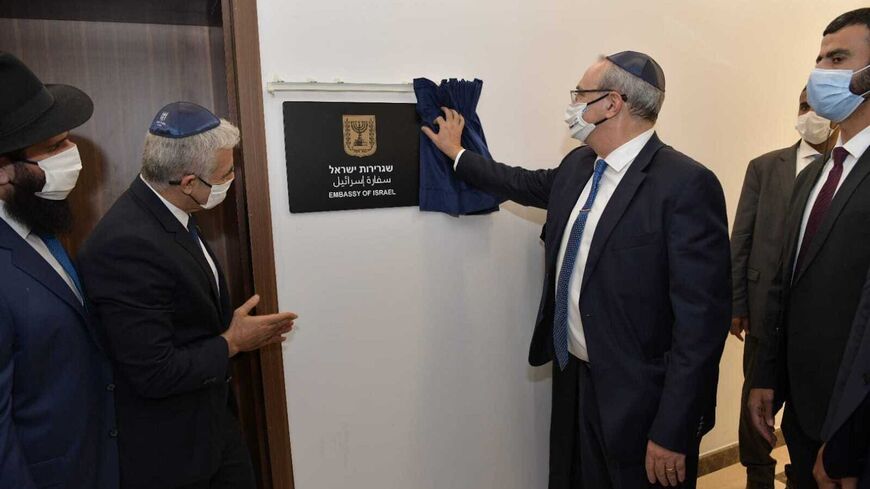 Foreign Minister Yair Lapid inaugurated Israel’s embassy to the United Arab Emirates today, saying, “This is a historic moment. And it is a reminder that history is created by people who understand history and are willing to change it, by people who prefer the future over the past." The minister further noted, “Israel wants peace with its neighbors. With all its neighbors. We aren't going anywhere. The Middle East is our home and we're here to stay, so we call on all the countries of the region to recognize that and to talk to us."

Lapid warmly thanked former prime minister and political rival Benjamin Netanyahu, whom he referred to as “the architect of the Abraham Accords and who worked tirelessly to bring them about.” Lapid also thanked former US President Donald Trump and current President Joe Biden for their contributions to peace in the region.

Kaabi expressed “enthusiasm over what we hope will be the first of many high-level visits. In the wake of the Abraham Accords of last year … our two countries have witnessed incredible strides in the political, economic and cultural fields.” Kaabi noted COVID-19 pandemic research, travel, trade, cybersecurity and artificial intelligence as domains of cooperation between the two countries that he said will bear fruit and benefit both peoples.

Duchman installed a mezuzah at the entrance to the embassy and made the traditional Jewish blessing over it.

This morning, before Lapid's arrival, Na’eh posted a picture of the façade of the new embassy with its Israeli and Emirati flags, tweeting, “30 years as a diplomat, but to see the blue and white here at the Abu Dhabi airport, whilst waiting for the minister of foreign affairs to land- is exciting! ”

Later this afternoon Lapid is scheduled to meet with his Emirati counterpart Foreign Affairs and International Cooperation Minister Abdullah bin Zayed al Nahyan. Tomorrow, Lapid is scheduled to dedicate the Israeli Consulate in Dubai. While in Dubai, Lapid will also visit Israel’s pavilion at the Dubai Expo 2020 trade fair. Israel was invited to participate at the expo even before the Abraham Accords.

The ceremony marked the first event in Lapid’s historic visit to the Emirates. After the signing of the Abraham Accords, then-Prime Minister Benjamin Netanyahu prevented his cabinet ministers from traveling to Abu Dhabi before him. Netanyahu postponed his trip several times and then canceled again on March 11, when Jordan delayed approval for Netanyahu’s plane to pass though its airspace. Thus, Lapid is now the first Israeli minister to officially visit the Emirates.

Israel’s embassy in Abu Dhabi is expected to be one of its largest diplomatic missions abroad. In addition to the diplomatic team, the mission will include representatives of the Israeli police, the Defense Ministry, the Finance Ministry, the Trade Ministry and the Tourism Ministry. Since the normalization of ties, several Israeli groups had visited the country, including last week's large delegation of Israeli manufacturers headed by the president of the Manufacturers’ Association, Ron Tomer.