Israel and the Emirates both believe that the potential for bilateral trade, commercial cooperation and investments is huge. 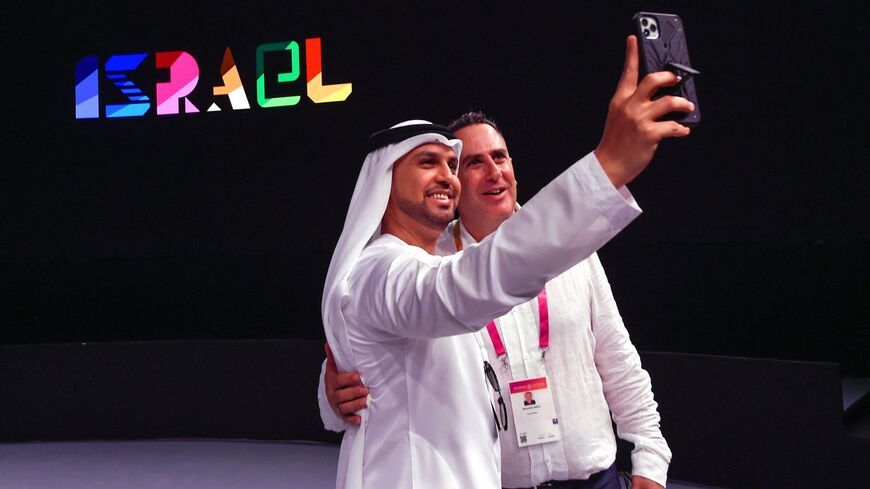 A visitor takes a selfie with Menachem Gantz, a representative of the the Israel pavilion, during a media tour ahead of the opening of the Dubai Expo 2020 in the Gulf Emirate on Sept. 27, 2021. - The six-month world fair, featuring exhibitions by 192 countries, is expected to attract more than 20 million international visitors when it opens Oct. 1 after a year's COVID delay. - AFP via Getty Images

It may be completely coincidental that one of the main ads for Expo 2020, which opened Sept. 30 in Dubai, featured an Israeli flag right over the head of Crown Prince Mohamed bin Zayed, the strongest person in the United Arab Emirates. Coincidental or not, it certainly was symbolic. A flag that in the not-too-distant past could not be flown in the Emirates at all is now right at the center of things – and certainly in the center of economic affairs.

And the same is true of Bahrain as well. In quick succession, these two countries broke a decades-long policy among Gulf states by signing normalization agreements with Israel — because it was in their own interests.

The most important of these interests are undoubtedly economic and commercial. The Abraham Accords are the clearest example of integrating economics and diplomatic policy. Israel simply needed an opportunity to see this through, and got it thanks to an especially friendly US administration and a growing Iranian threat, which only intensified (in Israeli and other regional eyes) by the 2015 nuclear agreement.

The numbers tell the story best. Data from the Israeli Chamber of Commerce shows that from January to July 2021, trade between Israel and the UAE came to $270 million (and over $610 million, when diamonds are added to the figure). This is almost three times more than the $94 million in all of 2020 ($190 million with diamonds). Trade with the UAE in June 2021 was over 20 times more than in June 2020, amounting to $150 million (including diamonds) in a single month.

A member of one of the eight wealthiest families in the UAE told Al-Monitor on condition of anonymity that financial forecasts by economists employed by his family’s firm believe that the potential for trade between the two countries could reach $3 billion by 2024 and $10 billion within a decade. Israel’s total international trade per annum amounts to approximately $120 billion.

From a strategic, diplomatic, and military perspective, the Abraham Accord diverted attention from the Palestinian problem, which had, until then, impeded any progress in Israel’s relations with its neighbors. The signing went hand in hand with then-Prime Minister Benjamin Netanyahu's cancelled plan to annex West Bank settlements.

The warm welcome that Israelis have received since then in the UAE and Bahrain, and that their citizens have received in Israel, is not just a positive example of cultural tourism. It signals the Gulf states' choice to sideline the Palestinian issue and form a strategic alliance with the country that has the strongest military capacities in the region. Israel can help them stand up to the one neighborhood bully, who continues to threaten them – Iran.

The American withdrawal from Afghanistan signaled that the US may not always be there for moderate states of the region. Thus, Israeli security support, both open and covert, is important in many fields in the Gulf region, from cyber warfare to the sharing of intelligence to the sale of weapons systems, even if there are still impediments to the latter.

There are enormous strategic benefits from the deal, which current Prime Minister Naftali Bennett and Foreign Minister Yair Lapid have promised to continue. A top Israeli official involved in military assessments and strategy, speaking to Al-Monitor on condition of anonymity, said that this alliance offers Israel a much closer glimpse of what is happening just a few dozen kilometers across the Gulf from Iran. Even if Israel is not there in person, its new allies could serve as its eyes and ears. This would be a significant shift in the balance of power with Iran.

Lapid paid an official visit the Emirates in June, and visited Bahrain Sept. 30 — in both cases, to inaugurate Israel’s new embassies. In Bahrain, he also visited the headquarters of the US Fifth Fleet and said, “Israel, Bahrain, and the US are partners in liberty and in a vision of a free world.”

These agreements indirectly prove how close Israel really is to the United States, which is one of Israel’s greatest strengths. Netanyahu took advantage of this close relationship as much as he could during the Trump presidency. In fact, it was changes in policy introduced by Trump at Netanyahu’s request which ultimately led to the signing of these agreements. Even if this influence has declined somewhat under the current administration, it remains extremely helpful to Israel, particularly in Third World nations, which need an attentive ear in Washington.

Israel’s ambassador to the UAE, Eitan Na’eh, says that the agreement between Israel, Bahrain, and the UAE is based mainly on the economic, commercial and civic benefits. Without the coronavirus pandemic, he said, trade would be even more advanced. “We used the last year to get to know the other side better," Na'eh said. "This was a mutual process. The Emiratis are long-term planners. They are thorough and cautious. The current assessment is that the economic potential of these agreements could amount to tens of billions of dollars in just a few years.”

Back in Expo 2021, the exhibits in the Israeli pavilion were prepared by different ministries, with an emphasis on agriculture, energy, and cyber systems. They have all been met with considerable interest. The Foreign Ministry in Jerusalem attributes this to a special tour of the pavilion before it officially opened for 30 senior journalists from the Gulf and online opinion shapers from across the Arab world.