Members of the new coalition are furious with Knesset speaker Yariv Levin for not setting a date for the government to be sworn in. 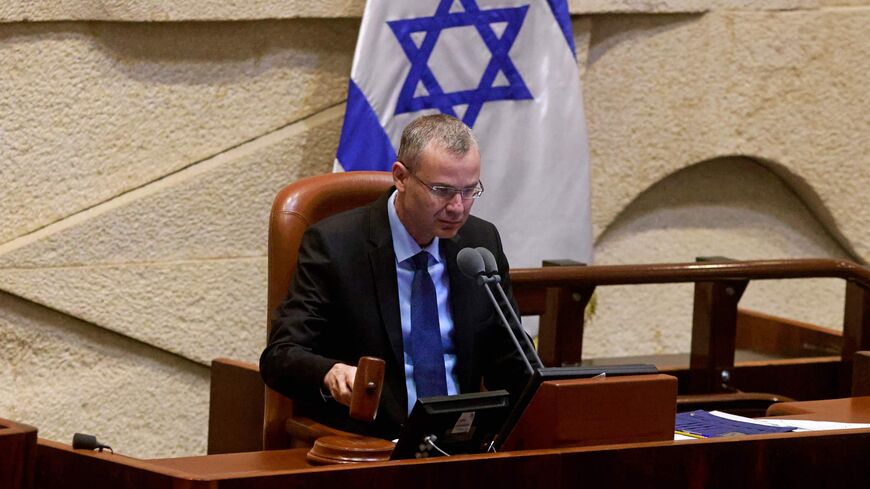 Israeli Knesset speaker Yariv Levin gives a statement on the coalition deal ahead of confidence vote on the new government, in Jerusalem on June 7, 2021. - MENAHEM KAHANA/AFP via Getty Images

Knesset speaker Yariv Levin of the Likud told the parliament today that Yesh Atid leader Yair Lapid notified him he had succeeded forming a majority-backed government. Levin did not say when the swearing-in ceremony for the new government will be, merely noting that in accordance to the law, the ceremony has to take place by June 14.

The new coalition had hoped to be sworn June 10, but it now seems likely the ceremony will take place next week.

Coalition members accused Levin, a close associate of Prime Minister Benjamin Netanyahu, of trying to buy time to thwart formation of the new government. They believe Netanyahu and his associates are trying to persuade Yamina members to withdraw their support, depriving the coalition of the simple majority it requires.

New Hope chair Gideon Saar complained that Levin should have brought the inauguration to a vote already this week. He said, "A parliamentary majority has been formed to replace the government. The attempts to thwart this through various types of pressure on Knesset members or their families does not reflect anything but a desire to hold on to power at all costs."

Yesterday Israel’s public broadcaster Kan revealed a recording where Levin is heard telling Transportation Minister Miri Regev that he had not yet notified the parliament of the date for the swearing-in ceremony and that "We need to decide what’s best for us."

Speaking at the weekly Yesh Atid Knesset faction meeting shortly before the session, Lapid highlighted the common interests and motivation uniting the eight parties of the coalition. "We convened all of the heads of the parties of the change bloc. I saw their determination. This government will be established. This government will be good and this government will hold, because it is based on the correct principles: relations of trust, decency and good will. This will be also the government of those who voted for the Likud, for Shas, for Yahadut HaTorah and Religious Zionism parties. They will find out that we are fair, that we respect their beliefs and positions and that we are attentive to their needs."

Last night, Yamina chair and designated Prime Minister Naftali Bennett appealed to Netanyahu to let go and allow the country to move forward with a new government. "In a few days we will swear in a new government. It is not a catastrophe, nor is it a disaster. It is nothing but a change of government, as is normal in every democratic country. Israel is not a monarchy; no one has a monopoly on who will rule,” he said.

Bennett also addressed threats that have been made against him, against members of his party and others in the coalition, in particular those against Yamina legislator Idit Silman. “Earlier today, I heard Netanyahu tell his supporters, ‘Don’t be afraid to stick it to them.’ In this instance it means following one of my Knesset members with a car all day long, blasting music at her with huge loudspeakers on the highway and scaring her kids on their way to school,” he noted.