Israeli women researchers are developing award-winning projects in the fields of food tech and smart agriculture. 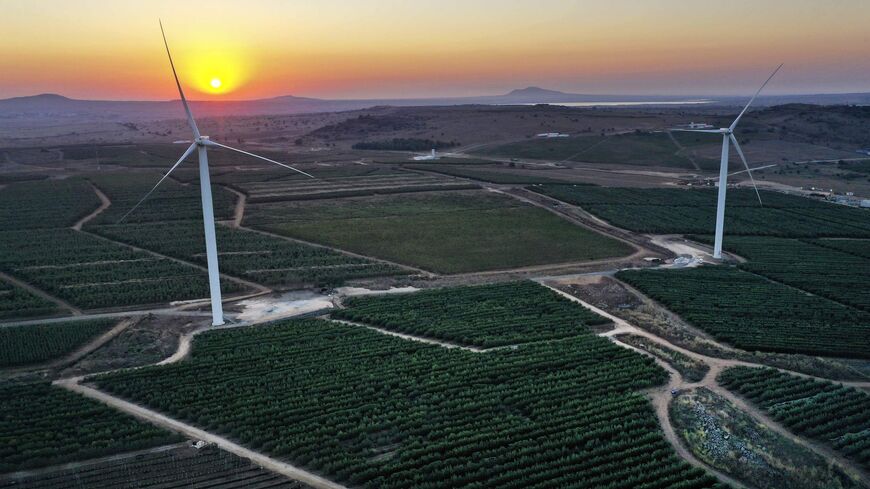 A picture taken on Oct. 5, 2020, shows wind turbines constructed between vineyards and fruit orchards as part of a wind farm, near El Rom settlement in the Israeli-annexed Golan Heights by the border with Syria. - MENAHEM KAHANA/AFP via Getty Images

Israel is becoming a tech powerhouse in two related fields: smart agriculture — how to grow food and preserve it — and developing food products such as meat-free protein alternatives. The researchers, many of them women, use novel tools in their efforts, such as 3D printing and nano-cellulose fibers.

One of the most complex problems in the agricultural production of foodstuffs is protecting crops from pests, contamination and rot and extending their shelf life as they are transported from the field to the customer at home. Food producers employ many different means to protect the produce, including spraying it with chemicals, deep freezing it, harvesting it early and ripening it quickly.

Yifat Hammer, the co-founder and general manager of an Israeli startup called Biotipac, has another technique she claims is friendly to the environment, the produce and the consumer. It makes use of “good” bacteria to extend the shelf life of the produce. The “good bacteria” preserves the food by taking the place of harmful bacteria. Refrigeration is not always necessary with this technique, which is also conducive to environmentally friendly packaging.

For her development, Hammer received first prize in the Women of Agri-Food Nation competition in Israel June 6. The competition is for women entrepreneurs using new technology in the fields of agriculture and food production. Its purpose is to spotlight products and companies in this field that are led by women and bring them to the attention of investors and the general public. This is the competition's second year and an extensive publicity campaign has attracted investors. Hammer won $200,000 for her company from the COPIA foundation, which invests in agriculture and food production.

Hammer grows her beneficial bacteria in a lab using a method she developed. What sets her technique apart is that she has managed to ensure that the bacteria remain effective over an extended period. The bacteria, kept in capsules or tiny bottles, are added as the produce is packaged. They immediately begin to multiply and create a protective layer over the foodstuffs, preventing them from rotting. Hammer has already registered several patents for the way that she grows and uses the bacteria and is now waiting for her big break. She hopes that her product will help curb world hunger by preserving crops long enough to be transported to remote places with meager yields.

One of the finalists in the competition was Maya Otmazgin Ashkenazi’s company MAOLAC. Inspired by breast milk, her product develops proteins that strengthen the body’s immune system. The proteins, which are being developed as a nutritional additive, are based on colostrum, the first form of milk produced by mammals in the first hours after birth. It is rich in white blood cells and proteins that play an important role in boosting the immune system, which is why it is recommended that mothers breastfeed their infants, even if only for the first few hours after birth. Studies have shown that it plays a role in preventing sudden infant death syndrome.

Otmazgin Ashkenazi says that she mapped the proteins of human and cow colostrum. “We compared the two and created a smart system that can create theoretical blends that can be incorporated in food to boost the immune system. These blends are adapted for different categories of foods, such as baby food or food for athletes, the elderly and people like you and me. … We are currently conducting experiments on different blends for different uses. We will soon need to raise significant funding, and are looking for partnerships with investors involved in the production of food and food additives.”

Last year Forbes Israel chose Otmazgin Ashkenazi, who is also the owner and general manager of another food tech startup, as one of its “30 Under 30.”

Another finalist was IncrediBowl, a company created by entrepreneur Adi Pollack that manufactures edible bowls and cups from organic materials that are biodegradable. She also produces dinner rolls and pitas in different colors, using all-natural ingredients.

Pollack is a single parent of a three-and-a-half-year-old son with special needs. As a result of various personal and economic difficulties, she was forced to move into her parents’ basement. Seeking help, she made contact with Yozmat Atid, a nonprofit that assists women entrepreneurs, was accepted into their mentorship program and received an aid package. Atid’s training course connected her with a networking group through which she was able to promote her business. She began selling edible utensils, including cereal and soup bowls, coffee mugs and cups for jams and other spreads, using social networks to advertise her products. Food manufacturers and various environmentally friendly businesses contacted her about collaborative ventures. She even received an offer to cater for the Dutch Embassy.

Three other finalists in the competition were Yosefa Ben Cohen’s Yo-egg, which creates realistic eggs entirely from plants that have the same texture, taste and nutritional value of chicken eggs; Valeria Kogan’s Fermata, which has developed a technique using artificial intelligence to monitor crops; and BugEra, whose co-founder Anna Melkov developed a new breed of flies that help recycle organic waste and convert it into biodiesel. Each project is currently in advanced stages of development, just waiting for investors to help them begin mass production.