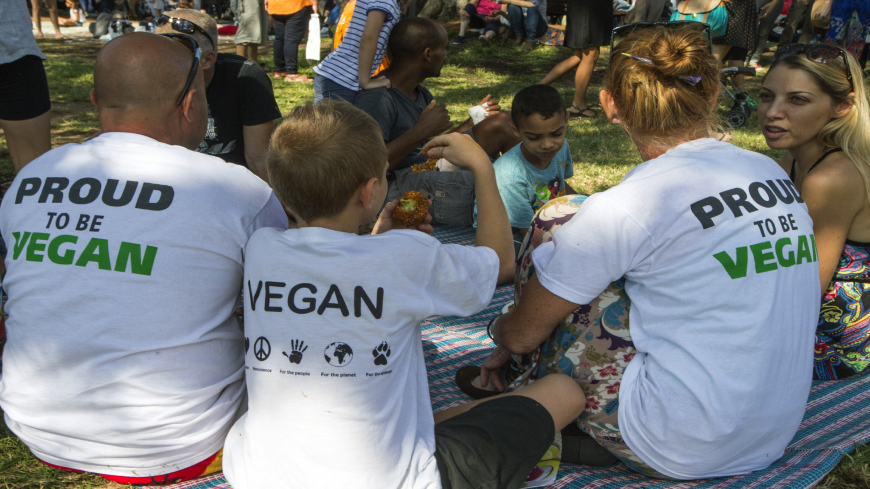 On Dec. 7, Prime Minister Benjamin Netanyahu abandoned his busy political schedule and the ongoing crisis at the Knesset for a somewhat unusual visit. He took a trip to the city of Rehovot for a grand tour of the Aleph Farms plant, which produces cultivated meat. Aleph Farms co-founder and CEO Didier Toubia, the government’s animal rights adviser Tal Gilboa and The Good Food Institute Israel’s managing director Nir Goldstein accompanied Netanyahu. The plant has its own chef resident, Amir Ilan. After touring the facilities, Netanyahu was invited to taste a few dishes of Aleph Farms' cultivated meat, becoming the first head of state around the globe to bite into a steak cultivated outside of a cow. "It’s delicious and guilt-free. I can’t taste the difference," stated the prime minister emotionally.

Indeed, he did not hide his personal interest in the project and its vision. "Meat is a major part of pollution in the world. In order to have a cut of regular meat, one needs a cow and to use so much pasturage with waste, pollution and investment of energy. … Now it will take a little time until this morsel will be profitable and not cost so much, but it will happen," he said.

But Netanyahu went further than that. He said that he will direct Government Secretary Tzachi Braverman to appoint a special person to bring together all of the Israeli plants and startups engaged in cultivated meat and meat substitutes, turning this industry into a national priority. "Israel will be a major power in alternative meat, alternative protein," said the prime minister.

External relations manager at Aleph Farms Yoav Reisler told Al-Monitor that the plant was established in 2017 in collaboration between the food-tech incubator "The Kitchen Hub" (founded by Israeli dairy company Strauss) and professor Shulamit Levenberg of the Technion Institute of Technology. Levenberg heads Technion’s Stem Cell and Tissue Engineering Laboratory and is the dean of Technion’s biomedical engineering department.

"Our technology originates from technologies developed by professor Levenberg over the past 20 years for medical applications. We are the only company in the world growing real beef steaks from the cells of cows, eliminating the need for slaughtering animals or harming the environment," said Reisler.

He explained that only a third of the cow is actually used for meat. The rest is used by the leather industry or simply disposed of. Contrary to small, sustainable farmers, mass-production farms exploit large plots of land, and huge quantities of water and energy for growing meat cows. Forests are cut down to make room for cow farming. Much energy and water are wasted over growing cow food, and then there is the contribution of the cows themselves to the emission of CO2 gases and the greenhouse effect.

"This is why in Israel we are pushing forward the cultivated-meat industry. Aleph Farms is part of a national plan for turning cultivated meat into an economic-growth engine. We are geared at battling nutrition insecurity in Israel and elsewhere across the globe." Reisler also said they are collaborating with several space agencies. In 2019, they participated in growing meat for the International Space Station, and they continue to research growing meat in unconventional environments on Earth and beyond.

Seven Cabinet ministries are currently engaged in a national policy plan to establish Israel as an alternative protein leader, advancing the country’s food-tech industry in general and cultivated meat in particular. Aleph Farms is obviously an important partner of this plan. Another major partner is the local branch of the abovementioned Good Food Institute. On its site, the institute explains that "current meat production is unsustainable and inefficient. It is a key driver of climate change, environmental degradation and antibiotic resistance." Its manager, Goldstein, states on the site, "We aim to promote Israel’s status as a global leader in alternative protein research, development and manufacturing."

The job position of Tal Gilboa as special adviser on animal rights was created by Netanyahu himself about a year ago. According to reports, it was his vegan son Yair who introduced activist Gilboa to his father and pushed in that direction. Since then, the Netanyahu government has advanced several animal rights initiatives. For Gilboa, cultivated meat is certainly part of this category. And so, by visiting Aleph Farms, Netanyahu garnered applaud from both the industry sector and animal lovers in Israel.

On the industry side, Israel has been a world leader in meat substitutes and alternative-protein food products for three decades already. One of the pioneers was the Tivall company, which specialized in vegetarian and vegan meat-resembling products. According to the Israel Export Institute, during the last two decades, Israeli food-tech companies have been on the leading edge of global innovation. Apart from Aleph Farms, some of the leading Israeli companies in meat and dairy alternatives are Future Meat Technologies, Redefine Meat, Zero Egg, Meat Tech 3D, SuperMeat and Rilbite. All of them had attracted important foreign investors in the past few months, and all of them are aiming for international markets.

Yaara Shimony, who manages the food-tech branch at the Israel Export Institute, told Al-Monitor that the Israeli traditional food industry has been under the radar for several years, but once technology and food came together, the Israeli food industry jump-started and advanced rapidly. "With its strong abilities in technology and smart agriculture and its natural openness to innovation, in just a few years Israel became one of the leading countries in food tech. The Israeli food-tech industry includes nowadays about 250 companies, excluding the dozens of traditional food companies that are also into innovation."

Shimony explains that the food-tech industry in Israel includes segments such as food safety and quality, health and wellness, smart packaging, personalized food, food supply chain and more. "Still, Israel is leading especially in the field of alternative protein. We can find in this sector companies that are dealing with plant-based protein, protein made out of insects and cultivated meat. Israel and the US are the two leading countries in research and development in the latter," she stated proudly.