Israel is quickly becoming one of the world leaders in cultivated meat, dairy and seafood products. 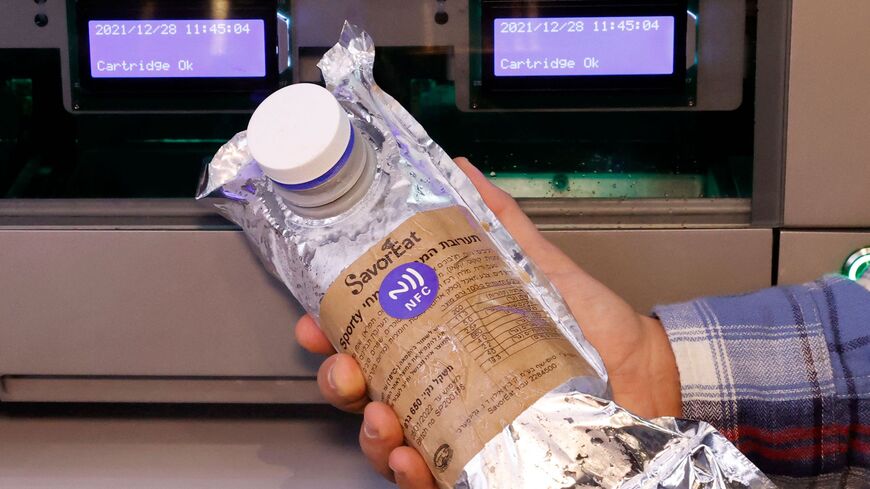 A man holds plant-based hamburger product to be offered in a sandwich by Israeli fast food brand BBB in the Israeli coastal town of Herzliya on Dec. 28, 2021. - JACK GUEZ/AFP via Getty Images

The Israeli food-tech industry continues to expand. At present, Israel is ranked second in the world in the number of cultivated-meat companies after the United States and third in the number of investors in the alternative protein field.

A recent report by Israel's Good Food Institute showed that investments in Israeli food-tech startup companies reached $320 million in the first six months of 2022, a 160% jump compared to the same period in 2021. On a global scale, investment in the sector between January and June 2022 reached $1.75 billion, with Israeli companies attracting some 18% of investments worldwide.

Jerusalem-based Mermade Foods is the first company in the world to grow scallops in a lab. CEO Daniel Einhorn told Al-Monitor that the company raised $3.3 million in a “tough period” for the global market. He explained that originally Mermade Foods, which was launched in 2021, targeted an investment of $2.5 million, but the oversubscription of roughly 30% shows investors' faith in the unique technology developed by this startup.

Einhorn explained that growing food in a lab is a costly process due to the high prices of the fresh ingredients the cells are fed. Mermade Foods, which plans to start commercial production in three years, developed a method to upcycle the waste produced by the cells through using microalgae and then reuse it to feed the cells. This patent-protected method is destined to cut production costs significantly.

On the choice to focus on scallops, Einhorn said that there is huge market potential worth $8 billion globally for this product.

He added that his startup aims at “saving the world from climate catastrophe” claiming that the fishing industry and aquaculture are more harmful to our planet rather that the meat industry. Einhorn emphasized that the company's product will be “cleaner” and healthier compared to “regular” seafood since it will not include chemicals, antibiotics, microplastics or mercury.

Several well-established Israeli companies and funds are also involved in the growing food-tech industry. The most prominent one is the Tnuva Group, Israel's biggest food manufacturer and leading dairy producer. Earlier this year, Tnuva announced the establishment of a new investment fund called Tnuva NEXT for investing in food-tech startups.

Tnuva is also a partner in the Fresh Start Food-tech incubator located in Kiryat Shmona, near the Lebanon border. Opened in 2020, Fresh Start took part in the incubator program set up by Israel's Innovation Authority. Within two years, it completed investments in 10 food-tech start-ups, among them ProFuse, which operates in the field of cultured meat, and BlueTree, which developed technology to lower the sugar content of fruit juice.

Speaking with Al-Monitor, Tnuva's Chief Innovation Officer Shay Cohen disclosed that since its inception 18 months ago Tnuva Ventures, the group's corporate venture capital fund, has completed investments worth $10 million. Tnuva, said Cohen, invests in different aspects of the industry including research and development and production. He described Israel as a global food-tech powerhouse, especially in the alternative protein domain.

Cohen explained that one of the reasons for Israel's success is its high-tech ecosystem, which includes a strong biotech industry, a strong agrochemical industry and a significant medical industry.

This leadership is evident in the numbers. Cohen revealed that there are currently roughly 340 Israeli food-tech companies and an average of 42 companies are established each year. Tnuva predicts that within a decade, 15% of the global meat and chicken market will be based on alternative protein and that by 2030 the world market for alternative protein will reach a value of $300 billion. Another major trend that Tnuva predicts is interest in products with a hybrid content of plant protein and protein produced through fermentation.

Israeli food-tech entrepreneurs highlight the importance of the industry in confronting food insecurity, especially in the Middle East and North Africa, region which is mostly desert and has been experiencing rapid population growth.

Naftali Moser is a regional business consultant in high-tech development with 20 years of experience. He believes that the Israeli food-tech industry can cement cooperation between Israel and its Arab neighbors.

Speaking to Al-Monitor, Moser noted that certain parts of the MENA region are already facing food shortages. It was no wonder, he said, that the Negev Forum, established earlier this year with the participation of four Arab countries — Morocco, Egypt, Bahrain and the United Arab Emirates — together with Israel and the United States decided to form a committee on food insecurity.

"Arab countries are obviously aware of Israel’s expertise in this domain. Solving world insecurity altogether might not be attainable, but easing food insecurity in our region could certainly be reached only through cooperation," he argued.