Even though his party is part of Israel’s new coalition, Ra’am Knesset member Saeed Alkharumi is already making waves over his top concern: house demolitions in unrecognized Bedouin villages. 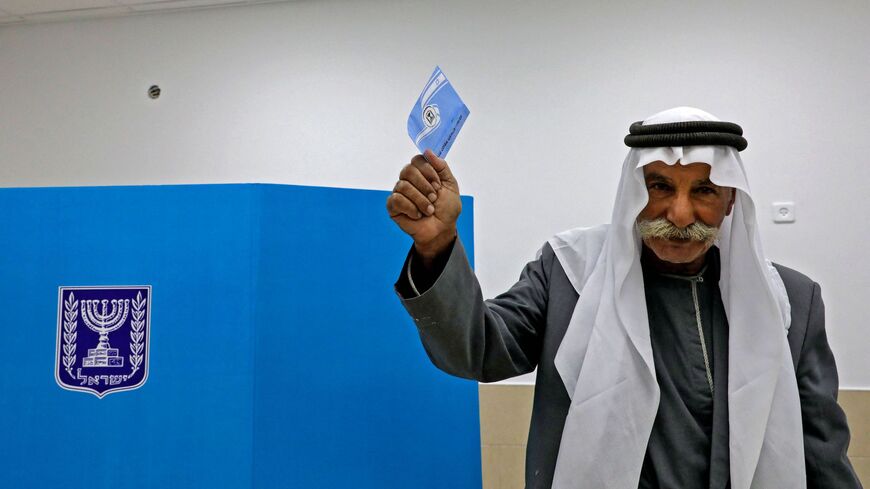 An Israeli Bedouin casts his ballot on March 23, 2021, in the Bedouin town of Rahat in the fourth national election in two years. - HAZEM BADER/AFP via Getty Images

Israel’s new cabinet held its first formal meeting June 20. The atmosphere was positive with smiles all around, but there was a commotion. Ra’am members arrived in a panic, exclaiming that Green Patrol teams (a unit of the Environmental Protection Ministry empowered to carry out inspections and investigations) were on their way to the unrecognized Bedouin village of Bir Hadj, accompanied by police officers, with some 300 demolition orders ready to issue.

The mini political drama seemed to center on Ra’am Knesset member Saeed Alkharumi, the only member of Ra’am to abstain from the vote on the formation of the government, despite the coalition agreement his party had signed. Many words and promises were exchanged and in the end, no demolition orders were issued.

Alkharumi is an Arab Bedouin politician who once served as the head of the regional council of Segev Shalom and belongs to the Al-Azazma tribe, one of the biggest of the Negev. He has quite a lot of political power from in the tens of thousands of Bedouin votes Ra’am receives. “Without the Bedouins of the Negev there’s no Raam. This is the base of our power. The population here depends on us to work for them. This is the goal at the top of our priorities, to improve our life in the Negev,” declared Alkharumi in a June 17 interview with the Israeli newspaper Yedioth Ahronot. He clarified, “If within a year nothing changes, we’ll have to rethink our support for the government.”

Alkharumi is evidently causing headaches for the Ra’am leadership and the Shura Council, the body that determines the party’s policies according to its principles. When Alkharumi abstained from the June 13 vote for the establishment of the new government, he went against the council’s decision. Afterward, he thanked his Ra’am colleagues on Facebook for recognizing his situation, saying that he appreciates their understanding.

Alkharumi has served in the Knesset since 2017. He is fully devoted to a single issue: stopping demolitions in unrecognized villages in the Negev. This painful issue has been threatening many Bedouins in the Negev for many years, but never made it to the top of the national agenda. With his abstention on the day the government was sworn in, Alkharumi put it there. “My position was clear a few days ago, and we were able to put the Negev issue at the forefront of the Israeli press and political scene,” he explained in a June 16 post.

Some publications suggested that Alkharumi might quit his party and the coalition over the Negev issue. While no one seems to have an answer, Ra’am is working to project that all is calm within the party. Shortly after the June 13 vote, Ra’am chair Mansour Abbas told the press, “Everything is OK; Alkharumi is with us.”

The real test will be the vote on the state budget, which by Israeli law is tantamount to a vote of confidence in the government. Will Alkharumi vote for or against it? Even if he votes against it, it is not certain he can topple the government. Joint List senior Ahmad Tibi, whose party is not part of the coalition, has already hinted that it might be willing to provide the government a safety net in exchange for certain concessions.

Former Knesset member Taleb El-Sana, a former Negev representative of Ra’am, tried to clarify the picture in conversation with Al-Monitor. “In my estimation, Alkharumi in the end will go with Ra’am’s decisions and not quit. Still, we should understand that as of now there’s no real achievement we can point to, and so he’s in a real bind and can’t support a government that demolishes homes and issues demolition orders. We should also remember that he’s closer in his mindset to [former Ra’am chair] Masud Ganaim and prefers to be part of an obstructive bloc and not part of the coalition, especially when its leader is Naftali Bennett and it includes figures like Gideon Saar and Avigdor Liberman. That being said, the situation created with Alkharumi could actually help Mansour Abbas continue to put pressure on the government.”

When asked about the issue of Negev Bedouin, who number 300,000, El-Sana continued, “They are trying to force urbanization and take people out of the tent and put them in a high rise, without consideration of their lifestyle.”

Fadi El-Obra, an entrepreneur and resident of the Bedouin town of Rahat, commented in conversation with Al-Monitor, “What did he [Alkharumi] expect? This is the path Mansour Abbas and Ra’am offered, dealing with only civic issues and no diplomatic or national issue. In the end, he felt the result. This is the price of being part of the coalition. Most of his tribe's people live in the unrecognized villages, so he couldn’t avoid shouting against it.”