Abdullah Abu Jaber was the longest-serving Jordanian in Israeli prisons. Two other Jordanians were released for less serious offenses. 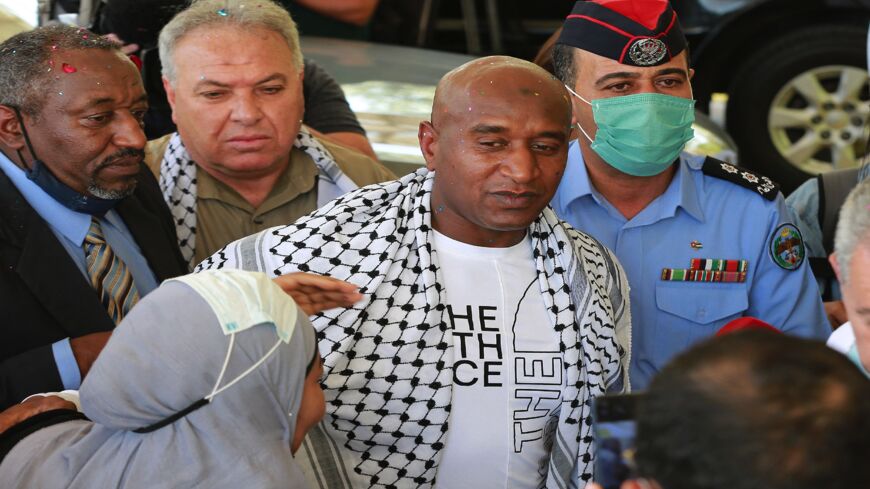 Palestinian-Jordanian Abdullah Abu Jaber, who was jailed in Israel after planting a bomb on a bus that wounded 13 civilians in 2000, is welcomed by his family upon his release at the Sheikh Hussein Crossing between Jordan and Israel on June 8, 2021. - KHALIL MAZRAAWI/afp/AFP via Getty Images

Israel released a Jordanian citizen from prison on Tuesday.

Abdullah Abu Jaber served 20 years in prison after planting a bomb on an Israeli bus in Tel Aviv in 2000 that injured several people. He came to Israel from Jordan to work following the 1994 peace agreement between the two states. Jaber was the longest-serving Jordanian in an Israeli prison and returned to Jordan on Tuesday upon the completion of his prison sentence, Reuters reported.

The bombing took place during the height of the second intifada, which was a widespread uprising by some Palestinians against Israel in both Israeli cities and the occupied West Bank.

Two other Jordanians, Musaab al-Daaja and Khalifa Al-Anouz, were also released from Israeli detention on Tuesday. The charges against the two men were dropped and they have returned to Jordan, the state-owned Al-Mamlaka news outlet reported. Reuters reported that the two men were arrested after crossing the Israeli border in May allegedly carrying knives. The Jordanian Ministry of Foreign Affairs and Jordan's Embassy in Tel Aviv fought for their release, according to Al-Mamlaka.

Jordan and Israel established full diplomatic relations in 1994 after fighting several wars against each other throughout the 20th century. Much of Jordan’s population consists of Palestinian refugees and their descendants from the first Arab-Israeli war. In May, hundreds of Jordanians stormed the Israeli border during the violence between Israelis and Palestinians next door. In March, Jordan’s Crown Prince Hussein bin Abdullah canceled a trip to Jerusalem following a disagreement with Israeli authorities over his security detail.