Israel continues to pursue exchange companies operating in the Palestinian territories under the rationale that they have been transferring funds to Hamas. 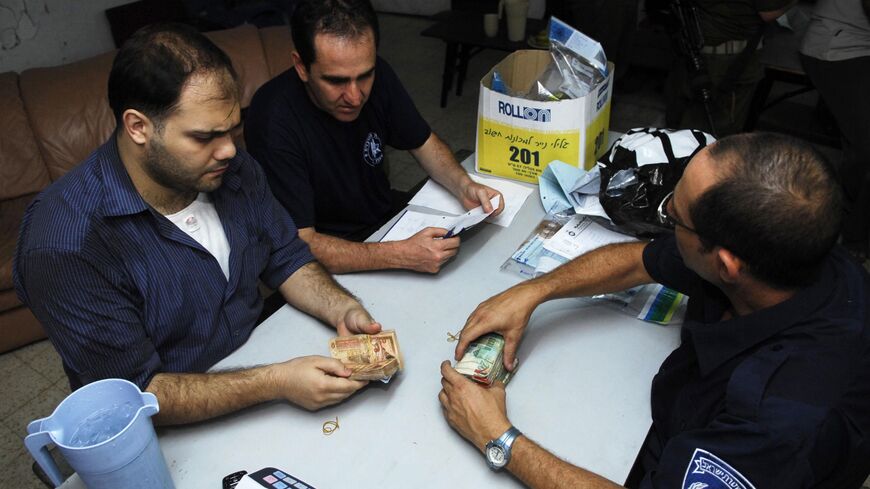 This picture handed out by the Israeli Army shows Israeli officers as they count and confiscate money inside a money exchange shop in the northern West Bank town of Tulkarm on Sept. 20, 2006. Israeli security forces confiscated more than $1 million dollars during a series of predawn raids on money exchange shops and banks across the West Bank. - Dan Bronfeld/IDF/AFP via Getty Images

RAMALLAH, West Bank — Within 48 hours, the Israeli army confiscated approximately $410,000 from two money exchange companies in the West Bank, alleging they had been illegally transferring funds to Hamas activists in the West Bank.

On June 8, the Israeli army raided the headquarters of the Beit Al-Maqdes Company for money exchange in the city of Tulkarm in the northern West Bank, confiscating $48,800 and 199,000 shekels ($61,419).

An Israeli army official said in a press statement June 10 that a large amount of money that belonged to businesses that transferred funds to Hamas in the West Bank had been confiscated, and added that Hamas is exploiting West Bank residents and their commercial interests for its own interests.

For years, Israel has been pursuing exchange companies in the West Bank and the Gaza Strip, claiming that some of them constitute a financial channel for Hamas in the Palestinian territories; the owners of such companies have denied the allegations.

He denied Israeli army allegations that his company transferred funds to Hamas members in the West Bank, saying, “This is completely false. We have nothing to do with anyone, and all our financial business goes through the Palestinian security services, such as the intelligence and preventive security. We have no problems in this aspect and we do not know the reason behind such accusations.”

Din said that he is examining with a group of lawyers the legal steps to take in order to recover the confiscated money, and stressed that the company is still operating as usual.

The Israeli campaign was not limited to exchange companies in the West Bank, as Israeli Defense Minister Benny Gantz approved May 25 the inclusion of two money exchange companies in the Gaza Strip, Al-Mutahidoon and Arab Al-Zein, on the terrorist list, saying they had transferred tens of millions of dollars from Iran to Izz ad-Din al-Qassam Brigades, the military wing of Hamas in Gaza.

Gantz had signed an order on Dec. 22, 2020, to confiscate $4 million transferred by Iran to Hamas in the Gaza Strip through Al-Mutahidoon, which is owned by Zuhair Shamlakh.

The order imposed restrictions on Shamlakh and his family’s movements in several countries and allows international financial institutions to restrict the company’s financial activities.

Ever since Hamas won the Palestinian legislative elections in 2006 and in the wake of the subsequent siege on financial aid to the Palestinian Authority (PA), Israel has launched dozens of campaigns to pursue money exchange companies and offices in the West Bank, accusing them of transferring funds to Palestinian faction activists and families of prisoners and those killed by Israel. In the process, Israel has confiscated millions of dollars.

Saed Abu al-Baha, a Hamas leader in the West Bank, told Al-Monitor, “Israel is grappling with its own domestic affairs and is trying to export them to us.”

He added, “Hamas is rooted in the Palestinian people and does not need to smuggle funds from here and there.”

Abu al-Baha said, “Israel, through these allegations, aims to show that it has control over and can besiege Hamas, when in reality it is unable to do so.”

He denied Israeli claims that Hamas is involved in exchange companies.

Abu al-Baha added, “Due to its defeat in Gaza and the resistance’s imposition of new rules of engagement, Israel is seeking to portray itself as victorious before its people and wants to say that it has achieved security breakthroughs in the West Bank by pursuing and besieging Hamas.”

The PA sought in the past to control the money exchange sector in the West Bank. In 2016, President Mahmoud Abbas issued a decree prohibiting anyone from opening a money exchange business without obtaining a license from the Palestine Monetary Authority. The decision specified a set of conditions and requirements for people to be able to engage in such activities.

Nasr Abdel Karim, an economic analyst and lecturer at the Arab American University of Jenin, told Al-Monitor that Israel has been storming exchange companies and confiscating money for a while now under the rationale of pursuing money transferred through exchange companies to families of Palestinian resistance activists.

Regarding the repercussions of pursuing money exchange companies, Abdel Karim said, “Such pursuits cause great economic damage to exchange companies. Storming them, confiscating their money and imposing fines on them in some cases are actions that lead them to incur heavy losses and to even stop operating.”

Abdel Karim pointed out that some exchange companies exploit the money of citizens to turn financial profits, knowing that such citizens prefer to avoid banks, which, according to Islamic Sharia, are forbidden. Therefore, he continued, confiscating such funds without returning them could harm citizens.

Abdel Karim said that confiscating these companies’ money violates Palestinian rights and sovereignty, but that the confiscations' impact on the economy, in general, is negligible, even if this causes severe harm to the owners of such companies.