Israel recently designated a Gaza currency exchange company a terror organization, raising concerns among local bankers and business owners about who might be next. 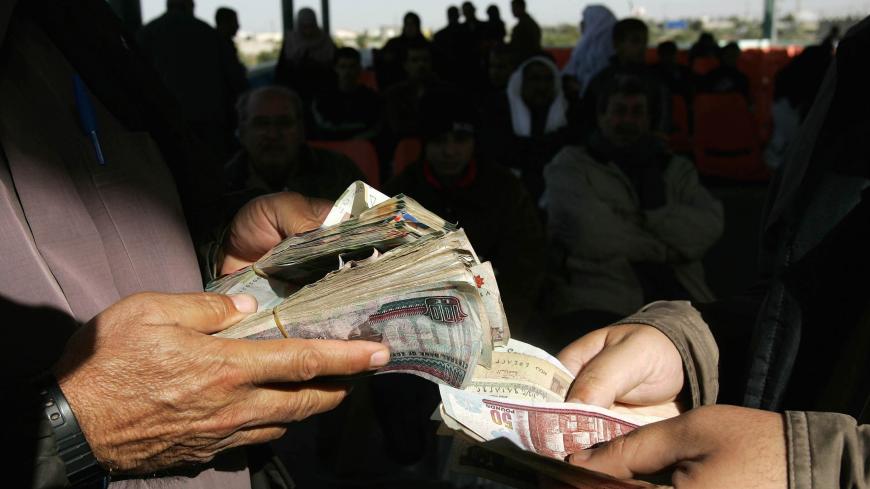 A Palestinian traveler exchanges money as he waits to leave the Gaza Strip for Egypt at the Rafah border crossing, Nov. 23, 2005, in the southern Gaza Strip. - GETTY/Abid Katib

GAZA CITY, Gaza Strip — Israeli Defense Minister Avigdor Liberman issued an order on June 21 designating the Hamed Exchange Company in Gaza City a terrorist organization. The directive follows a recommendation by Shin Bet, Israel's intelligence service, accusing the company of funding Hamas. Liberman noted that declaring the company a terrorist organization would prevent it from working with financial institutions internationally, thus cutting off sources of funding for the movement.

Considered a first of its kind measure by Israel against a company in Gaza, the move was foreshadowed by the Israeli military's campaign against money exchange operations in the West Bank between 2006 and 2017. The companies targeted were accused of transferring funds to Palestinian activists and families of political prisoners and Palestinians killed by Israelis or in attacks against them. They were met with orders to confiscate millions of dollars and shekels and to close. Their owners were also arrested.

A former partner of Hamed Exchange, Mahmoud Hamid, told Al-Monitor that the company had ceased operations in December 2016, without stating why, and that he had then gone on to work independently, opening Al-Wafaq Exchange Company in Gaza City in December 2017.

Hamed Exchange had been managed by Hamed al-Khadrawi in partnership with others, including Hamid. Al-Monitor contacted Khadrawi for information about the company, but he declined to offer any details, stating only, “I don’t belong to Hamas or any other Palestinian organization.”

Al-Monitor visited the area of Hamed Exchange's former location to talk to employees of nearby exchange companies to gather information. They all declined to speak with the exception of the owner of a small shop who did so on the condition of anonymity, offering that Hamed had opened between 2004 and 2006. Liberman’s decision has raised concerns among other exchange companies and shops, so their owners are reluctant to talk to the press for fear of being targeted by Israel.

Hamid said that Hamed Exchange had been licensed by the Palestinian Monetary Authority (PMA) in Ramallah, so its financial operations were transparent and subject to oversight. According to him, the company had complied with all PMA laws and regulations.

He also said, however, that Al-Wafaq has not yet obtained a license. Denying Liberman's claims of funding Hamas, Hamid emphasized that Hamed’s operations had been limited to currency exchange and domestic money transfers.

Hazem Qassem, a Hamas spokesman in Gaza, also denied Liberman’s accusations against the company. Speaking to Al-Monitor, he described the decision as another element in Israel’s propaganda campaign to justify its siege of Gaza. Qassem noted that both Israel and the Palestinian Authority (PA) have stepped up sanctions against Gaza in recent months with the goal of coercing Palestinian resistance factions and fulfilling political plans advocated by the United States.

The sanctioning of Palestinian institutions for funding Hamas peaked in 2004, when some 300 American relatives of victims of alleged Hamas attacks in Israel and the Palestinian territories filed a lawsuit against the Arab Bank in US federal court in New York. They accused the Palestinian bank, based in Amman, of facilitating money transfers to families of Hamas members who were killed during confrontations with the Israeli army or in attacks against Israel. In August 2015, the Arab Bank reached a settlement with the plaintiffs worth millions of dollars. In February 2018, an appeals court threw out the jury verdict against the bank, but the settlement remained valid.

The PMA said in a June 23 press release published by WAFA, the official Palestinian news agency, that its records do not include an organization licensed under the name Hamed Exchange. Since the company was shut down in 2016, it is no longer registered as active at the PMA.

The general director of companies in Gaza’s Ministry of Economy, Abdullah Abu Ruwayda, confirmed to Al-Monitor that government records do not contain the name of an exchange company fitting the one identified by Liberman. Abu Ruwayda said that he sees Israel’s accusations as an attempt to further constrict the financial landscape in Gaza, whose economy is already in a state of collapse due to the siege imposed by Israel 12 years ago.

He explained that there are around 600 monetary and exchange shops in Gaza, with only around 73 of them licensed by the PMA. The remainder are licensed by Gaza’s Ministry of Economy as “solidarity companies,” which only operate locally. Abu Ruwayda claimed that his ministry maintains oversight of the activities of these shops through the Monitoring Department, which was established in October 2016. Before that, the businesses had operated randomly in the absence of official monitoring.

As part of PA efforts to regulate the exchange sector and avert Israeli pretexts for targeting financial institutions for supporting terrorism, Palestinian President Mahmoud Abbas in 2016 issued an official decree banning exchange activities without a PMA license. The existing unlicensed companies continued operating as they always had.

Nasr Abdel Karim, a professor of economics at Birzeit University, told Al-Monitor that exchanges and other companies in Gaza are concerned that the decision to classify Hamed Exchange as a terrorist organization is the first step by Israel in a broader campaign against non-banking financial institutions in Gaza.

Karim explained that this would put a number of banks on notice, prompting caution in their dealings with Gaza’s exchange companies for fear of being accused of funding terrorism, like the case of the Arab Bank.

Yet according to Muhammad Miqdad, a professor of economics and finance at the Islamic University in Gaza, Israel’s latest decision will neither advance nor impede the economic reality in Gaza, which is experiencing a meltdown not witnessed for decades as a result of the Israeli blockade and punitive measures by the PA.

Miqdad told Al-Monitor that Israel’s charges of supporting terrorism and Palestinian militants have continued uninterrupted since the PA's establishment. He called on the international community to pressure Israel to lift the siege and allow Gaza’s residents to live in dignity and rebuild their destroyed economy.

In recent months, Israel has tightened its fiscal blockade of Gaza, refusing to convert foreign currency in adequate quantities, including dollars and Jordanian dinars. Banks and money exchanges have also had difficulty replacing damaged currency due to procrastination on the part of Israeli banks. On June 25, the PMA could only replace part of its currency stocks.