The Palestinian Ministry of Economy recently announced the formation of a new oversight committee to monitor the work of exchange shops in the Gaza Strip, in light of the manipulation of currency prices that has been ongoing for many years. 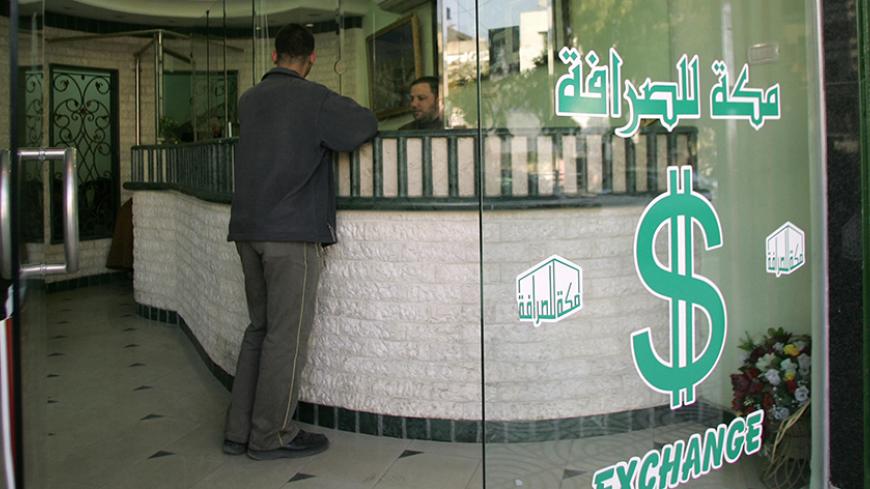 GAZA CITY, Gaza Strip — On Oct. 26, the Palestinian Ministry of National Economy started the process of establishing an oversight department aimed at overseeing the work of currency exchange shops and companies in the Gaza Strip, in a first step of its kind since the establishment of the Palestinian Authority (PA) in 1994. The department will work in full coordination with the Palestine Monetary Authority (PMA).

The establishment of the oversight department aims at organizing the currency exchange profession at a time when exchange shops and companies amount to 600 in Gaza alone, of which only 30-40 are legally registered. Most of these shops and companies operate without the required license from the PMA or the Ministry of Economy.

Based on the Palestinian Companies Law of 1929, several amendments made to it by 2010 as well as Article 3 of Presidential Decree No. 41 of 2016, “No individual shall undertake any money exchange business without obtaining a license from the Monetary Authority.”

Ayman al-Abed, the undersecretary of the Ministry of Economy, told Al-Monitor that the department started its work on Nov. 1, and registration began as of that date for illegal exchange shops and companies in the Gaza Strip and will last for one month. Abed said that the turnout for registration was high so far.

Abed explained that the establishment of the department came in full coordination with the PMA, whose mission is to oversee and supervise the registration of exchange companies deployed in Gaza in order to limit the state of chaos plaguing the profession, and protect the funds and deposits of citizens who invest their money in those companies.

The chaos plaguing the profession is exemplified by some money exchangers’ manipulation of currency prices in a way that is not in line with the prices set by the PMA on a daily basis. They charge high commissions on transfers made by citizens due to the lack of control over those companies and shops.

Abed said that illegal exchange shops and companies will be dealt with according to the law. They will be closed as per Article 60 of the 2008 Palestinian Companies Act, which stipulates, "No company shall start performing its work before obtaining a registration certificate from the authority in charge."

Abed added that following consultations with the PMA, his ministry decided to provide some registration facilities to these shops and businesses, particularly as far as the capital value is concerned. The latter has been reduced to 100,000 Jordanian dinars ($141,000) per company as a result of the difficult financial and economic conditions plaguing the Gaza Strip. Article 94 of the Companies Act of 2008 had stipulated that the capital shall not be less than 200,000 Jordanian dinars.

For its part, on Oct. 27, the PMA published in the Official Gazette a decision regarding the acceptance of license requests filed by exchange companies, which stated, “Based on the provisions of Presidential Decree No. 41 concerning the licensing and control of money exchange businesses in Palestine and following the instructions issued thereunder and in the framework of the efforts of the Monetary Authority aimed at advancing the banking sector and developing its business, and based on specialized studies about the needs of the market, [the PMA] announces that it will continue to accept new license applications from exchange companies as well as license requests from companies seeking to open new branches.”

Al-Monitor interviewed several owners of exchange shops and companies and noted that while these licensing and oversight measures have been warmly welcomed by some, they have stirred feelings of resentment among others.

Tamer Baroud, the owner of the Geneva Exchange and Transfers Company in Gaza, welcomed those steps and said they were necessary to regulate the exchange sector in the Gaza Strip. He noted that illegal companies and shops affect their work as they manipulate currency exchange rates.

Baroud told Al-Monitor that his company and other licensed companies operate according to a PMA-approved financial system, which requires them to submit their financial transactions with customers and clients on a weekly basis. This creates a state of confidence between these companies and the citizens depositing money or exchanging currency, unlike the case with illegal companies.

Osama Abu Sido, the owner of the UAE Exchange and Transfers Company in Gaza, told Al-Monitor that such steps force workers in this profession to abide by the law and the financial tradings. The PMA asks money exchangers to provide it with a copy of the audited financial statements of activities.

He stressed that the unlicensed companies’ evasion of monthly licensing fees and taxes, estimated at $1,000 a month for companies whose capital amounts to $250,000, leads to manipulation in currency exchange rates, and this negatively affects the work of the licensed companies.

For his part, the owner of an unlicensed company told Al-Monitor on condition of anonymity that those measures are only aimed at collecting money and taxes for the Ministry of Economy. He explained that should he decide to file for a license, he would be forced to pay nearly $2,000 per month in taxes to the ministry — his company capital being about $500,000.

“I evade the licensing process due to the difficult financial situation in the Gaza Strip, the economic recession resulting from the Israeli blockade since 2006 and the financial tradings that get more complicated by the month. Sometimes, I can barely pay salaries to my workers,” he said.

Following Hamas’ victory in the legislative elections in 2006, a state of fear has plagued the Palestinian banks in Gaza as they voiced concerns of being accused of supporting “terrorism,” given that Hamas is deemed by some Western countries and the European Union as a terrorist movement. Also, some financial institutions around the world, such as Western Union, stopped dealing with Gaza’s banks, which led the money exchange business to recover and increased the number of employees working in the field. Citizens now resort to these shops and companies given the easiness they provide as far as financial tradings are concerned.

Moin Rajab, an economics professor at Al-Azhar University in Gaza, told Al-Monitor that the exchange sector in the Palestinian territories in general and the Gaza Strip in particular is suffering from chaos and lack of control by the PMA and the Ministry of Economy, and the attempt to belatedly adjust and monitor this sector is something that the Palestinians have been calling for.

He said that a lot of remittances that come into the Gaza Strip prompt some of the owners of these unlicensed companies to collect additional fees from citizens on such remittances. Also, these owners force citizens to exchange the transfer amount from a currency to another in order to charge commissions.

Palestinian citizens are the most affected by the fact that most of the companies and shops are illegal, and they hope that this step would strengthen confidence in these companies and control the manipulation of currency prices that has been ongoing for many years.