As PA tightens financial noose on Hamas, citizens will suffer

Upcoming sanctions on money transfer firms in the Gaza Strip — designed by the Palestinian Authority to weaken Hamas — will ultimately harm cash-strapped families and individuals. 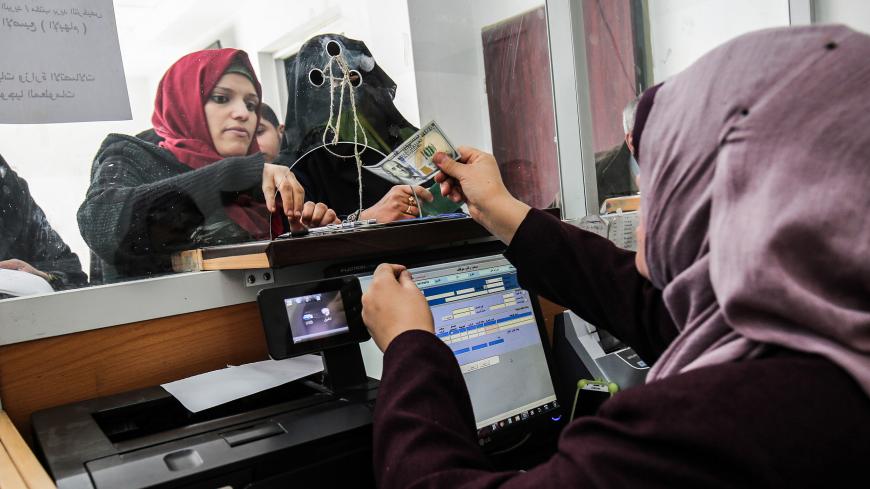 The PA has long pressured Hamas to give up the movement's control of the Gaza Strip. Reconciliation efforts have failed.

PA sanctions in recent years have affected all aspects of life in Gaza, forcing 26,000 government employees into early retirement, reducing the salaries of 62,000 employees by 50% and cutting off the money paid to 277 released detainees. In addition, the sanctions delayed for six months the disbursement of social benefits to 76,000 families in the Gaza Strip, suspended the budgets of the health and education ministries, closed the bank accounts of orphanages covering the needs of 40,000 children and greatly reduced medical transfers abroad, especially for cancer patients.

The PMA declined to comment to Al-Monitor about the Al-Akhbar report, giving no reason. However, a close associate of Palestinian President Mahmoud Abbas told Al-Monitor on condition of anonymity, “The PA will do everything to end Hamas’ control over Gaza as quickly as possible and this includes drying up its [support] sources. Hamas brings money into Gaza through money transfer companies in ways the PA cannot detect. These companies are essential to increasing the movement’s budget and revenues.”

Of the 500 money transfer companies operating in Gaza, only 60 are licensed. All 500 firms face obstacles in sending and receiving transfers. They can't transfer more than a few thousand dollars and can't receive any money from sources unknown to the PMA.

Three types of transfers take place in Gaza. These include transfers from one bank to another. Second are "fast transfers," divided into two categories: licensed ones using operations such as MoneyGram and Western Union; and unlicensed ones that go through firms such as Xpress Money, Xpress Remit and Al Ansari Exchange. The third type consists of manual transfers outside the banking system and are tantamount to money laundering. These transfers often involve Palestinian organizations that Palestinian and Israeli security services prevent from opening bank accounts.

Abed al-Khaleq, an employee at a money transfer company he did not name for security reasons, told Al-Monitor, “The PMA [told] us early in 2019 to regularize our situation and get our licenses. We learned from the PMA that more sanctions will be imposed on Gaza, to include us. This will affect over 2,000 employees and thousands of people who benefit [from money transfer companies].”

He added, “Our company averages 5,000 transfers per month, worth millions of dollars. Strangely, the amount of money we send from Gaza abroad is greater than we receive.”

Money transfer companies conduct thousands of transfers daily to and from the Gaza Strip. Gazan families of students studying abroad send them money to cover tuition fees and accommodation costs. Meanwhile, Palestinians in Arab and Western countries send remittances to their families in Gaza to help them get by under the difficult circumstances resulting from the ongoing Israeli blockade imposed more than a decade ago.

Usama Nofal, director of planning and policy at the Ministry of Economy in Gaza, told Al-Monitor, “The PA’s targeting of money transfer companies will bring the economic situation in Gaza further down, especially with the lack of foreign exchange in Gaza. The concerned Gaza government authorities don't know the amount of funds entering Gaza through these companies. We have no control over them; they aren't subordinated to a central bank.”

Gaza’s money transfer companies have operated smoothly in the past, but after Hamas took control of Gaza in 2007, more conditions were imposed on people using these companies' services.

In January 2012, Western Union canceled the licenses it had granted to exchange and money transfer companies in Gaza. In May 2015, the Israeli army raided exchange companies in the West Bank cities of Hebron and Bethlehem, accusing them of transferring money to Hamas. That same month, Palestinian security services announced they had discovered financial sources transferring funds to Hamas worth tens of thousands of shekels to and from Gaza. (One Israeli shekel equals roughly 28 cents.)

Former Israeli Defense Minister Avigdor Liberman in June 2018 classified Hamed Exchange Company in Gaza as a terrorist organization, accusing it of helping Hamas financially. On Nov. 22, the PA approved the National Strategy for Combating Money Laundering and Terrorism Financing aimed at identifying the reasons for transfers between banks and tracking their sources and beneficiaries.

The process for individuals has evolved/devolved, depending on the point of view, over the years. Now, when clients want to receive transfers, the companies must ask for their ID card, cellphone number, details about the sender and the nature of the relationship between them, for example, whether they are related or coworkers.

Still, it could be worse, and no doubt will be.

Mohammed Abu Jayab, editor-in-chief of Al-Eqtesadia newspaper in Gaza, told Al-Monitor, “Individual transfers via Gaza money transfer companies are simple, but they involve large amounts. During Ramadan 2018 [mid-May to mid-June], $30 million was transferred to Gaza. The PA and Israel are accusing these companies of funding Hamas.”

He added, “Such accusations are hard to believe. These companies don't dare transfer large amounts of money to Hamas because they are licensed by the PMA. Also, restrictions are imposed on the parties transferring money from outside Palestine, who fear being pursued by their countries of residence. What’s more, Palestinian security services take action against any company transferring money to Hamas.”

Money transfer companies in the West Bank are also subject to tight control by both the Israeli and Palestinian security services. The economic department of the Palestinian Preventive Security Service controls all transfers to verify the sources and grant security approval before they are cashed.

Atef Adwan, head of the Economic Committee of the Palestinian Legislative Council, told Al-Monitor, “The expected PA step against the money transfer companies is very serious because it further reduces the little cash left in Gaza. This comes within the PA’s intention to block the flow of money into the Gaza Strip and get rid of any and all financial resources. The PA wants to push the economic situation in Gaza to collapse.”

It's currently easier to receive funds through money transfer companies in the Gaza Strip than through banks, which impose complex procedures and are subject to Israeli and Palestinian control. The PA knows that these companies are the only outlet for Palestinian families in Gaza to receive money from abroad, and that these pending restrictions are designed to make citizens' economic situation even harder. Needy families receiving money from abroad will suffer and poverty rates in the Gaza Strip will rise.