Iran has reportedly resumed its funding to the Palestinian Hamas movement through funds to families of Palestinians killed in resistance activities in the Gaza Strip. 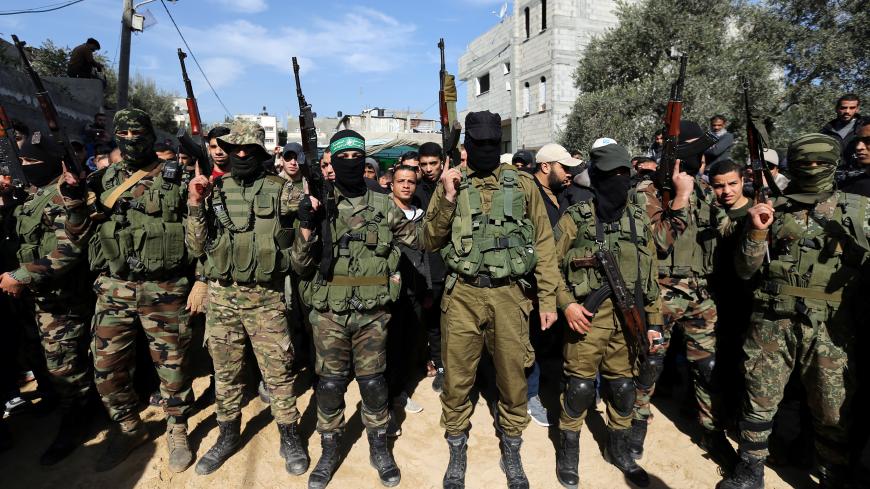 GAZA CITY, Gaza Strip — Iran has renewed its funding for the Hamas movement through aid to the families of Palestinians killed in resistance activities, numbering 1,700 families in the Gaza Strip, who stopped receiving their monthly salaries in February because of a decision by the Palestinian Authority (PA). A limited amount of funds also went to families affiliated with the Islamic Jihad movement.

The Iranian Palestinian Martyrs Foundation announced May 30 that it would provide financial aid to 1,540 families in the Gaza Strip.

This announcement was made on the sidelines of the annual Iftar dinner held in the Gaza Strip for the third year in a row. The dinner was organized in Tehran by the International Conference to Support the Palestinian Intifada.

In his speech, head of the Supreme National Security Council of Iran Ali Shamkhani saluted the families of the “martyrs and wounded” and stressed that Iran will continue to support the Palestinian factions.

In February, the PA halted the salaries of the families of Palestinians killed in resistance activities in Gaza, citing a technical defect at the Ministry of Finance and noting that the reimbursement would resume in two days — but nothing has been processed yet.

Ammar Dweik, head of the Independent Commission for Human Rights, said in a statement to the local Watan radio May 30 that the PA’s decision to cut salaries is “a political decision that violates the law.”

Also, Lebanon's Al-Akhbar newspaper reported Jan. 30 that the PA slashed the salaries of employees because they belong to Hamas, which came in the context of the financial cuts in Gaza that began in March 2017, in a bid to put pressure on Hamas to give up power.

A source in the Palestinian Martyrs Foundation who spoke on the condition of anonymity told Al-Monitor that the funds amount to $651,000 and will be distributed in the coming days among “1,540 martyrs' families in the Gaza Strip through the branches of the National Islamic Bank, which is affiliated with Hamas.”

“Iran believes it is a sacred duty to stand by these families in their predicament,” the source added.

Al-Monitor tried to contact several PA officials for a comment on the Iranian funding, but they refused to make statements.

In Nov. 27, 2018, Iran announced its financial adoption of Palestinians killed in the protests, which angered the PA. Azzam al-Ahmad, a member of Fatah’s Central Committee and the PLO's Executive Committee, made scathing comments against Iran on Nov. 27, 2018, saying it's the No. 1 sponsor of the rival Palestinian factions' division.

“If Iran had good intentions, it would have adopted all of the Palestinian revolution martyrs. But it did not even adopt one martyr in Jerusalem — only those who were killed in Gaza — because it wants to ensure the continuation of the division — its trump card in political maneuvering,” Ahmad said.

Maher Badawai, secretary-general of the National Committee for Families of Martyrs, told Al-Monitor they tried in vain to talk the PA into reimbursing the salaries for the families in Gaza.

Rashad al-Asli, father of a Palestinian killed in an Israeli airstrike east of the town of Beit Lahia in the Gaza Strip in 2009, and whose salary has been cut, told Al-Monitor, “I went to the bank in January to get paid as usual, but I was surprised to see that I had nothing in my bank account. I have been told the Ramallah Ministry of Finance did not make the transfers.”

“We have been waiting since then to get paid. Nothing yet,” he added. Asli said his son did not belong to any faction and he had received financial aid from Iran once in mid-2018.

Since 2001, Iran has been making periodic financial aid payments to thousands of families in Gaza and the West Bank who do not receive any payments from the PA through the al-Ansar Charity Association based in Gaza City.

Sami Abu Ayadah, who is in charge of Palestinian martyrs' cases in the association, told Al-Monitor that Iran provides financial aid every three months to 9,000 Palestinian martyrs’ families (7,000 in the Gaza Strip and 2,000 in the West Bank). He did not disclose the mechanism of receipt of such funds.

He explained that the Iranian support to these families has declined since 2015 when Iran was offering support to several countries in the region witnessing conflicts such as Yemen, Syria and Iraq.

“In 2018, Iran made a grant of $2 million, which is seen as a small amount compared to what it had been offering in previous years,” Abu Ayadah said.

Political analyst and professor of Palestinian studies at the University of Tehran Hadi Barhani argued that Iran’s financial aid reflects its declared support for the Palestinians.

It seems Iranian funds will continue to flow into the Gaza Strip despite criticism by the United States, Israel and the PA.