The flare-up could threaten last month's cease-fire between Israel and Hamas. 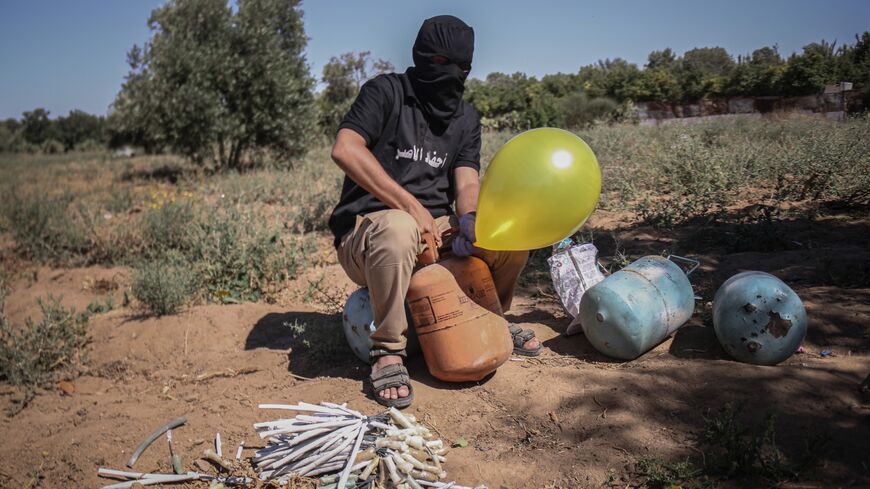 A masked Palestinian supporter of the Al-Nasir Salah Al-Din Brigades prepares incendiary balloons to launch across the border fence east of Gaza city towards Israel, on June 16, 2021, east of Gaza City in Gaza. - Fatima Shbair/Getty Images

The Israel Defense Forces (IDF) said they struck military compounds and a rocket launch site belonging to Hamas. The attack was in response to incendiary balloons launched from Gaza into Israel, the IDF tweeted.

Some Palestinians in Gaza launched balloons carrying flammable materials into Israel on Thursday for the third day in a row. The incendiary devices caused eight fires in southern Israel, The Times of Israel reported.

The Hamas-affiliated Safa news outlet confirmed that Israeli jets fired missiles at sites belonging to “the resistance” in the northern Gaza Strip. Hamas and its allies in Gaza often refer to themselves as “the resistance.” The airstrikes also hit farmland in north Gaza, according to Safa.

The balloon attacks began Tuesday in response to an Israeli nationalist rally in Jerusalem. This prompted Israel to strike Hamas targets in Gaza on Wednesday. These were the first armed attacks between Israel and Palestinian groups in Gaza since Israel and Hamas signed a cease-fire in May that ended 11 days of warfare.

The Palestinian military and political organization Hamas controls Gaza internally, and several other armed groups such as the Islamic Jihad also operate there. The territory is subject to an Israeli and Egyptian blockade.