The chief of staff to outgoing Iranian President Hassan Rouhani was quoted as saying that Washington had agreed to remove more than 1,000 sanctions imposed upon Iran by the previous US administration. 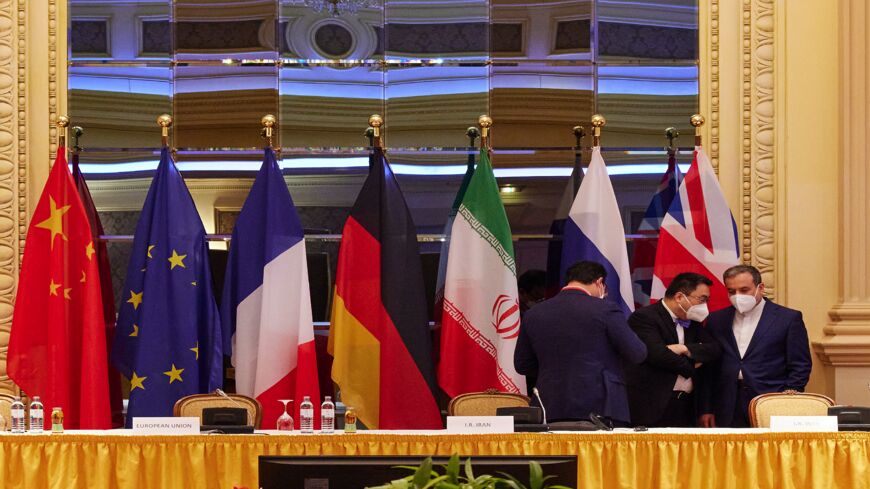 In this handout image provided by EU Delegation Vienna, Iranian Deputy Foreign Minister Abbas Araghchi (R) speaks with other participants at the JCPOA Iran nuclear talks on April 27, 2021, in Vienna, Austria. Representatives from the United States, Iran, the European Union and other participants from the original Joint Comprehensive Plan of Action (JCPOA) are meeting both directly and indirectly over possibly reviving the plan. - EU DELEGATION VIENNA via Getty Images

An Iranian official said on Wednesday the United States plans to lift all sanctions on Iran’s oil and shipping industries and delist some members of Supreme Leader Ayatollah Ali Khamenei's inner circle as part of efforts to restore the landmark nuclear agreement.

"An agreement has been reached to remove all insurance, oil and shipping sanctions that were imposed by Trump," said Mahmoud Vaezi, chief of staff to outgoing Iranian President Hassan Rouhani.

"About 1,040 Trump-era sanctions will be lifted under the agreement. It was also agreed to lift some sanctions on individuals and members of the supreme leader's inner circle," Vaezi said, according to state media cited by Reuters.

The Biden administration has said it is willing to lift certain sanctions on Iran in exchange for Tehran resuming compliance with the nuclear accord, known formally as the Joint Comprehensive Plan of Action (JCPOA). Since former President Donald Trump abandoned the deal in 2018 and reimposed harsh economic sanctions, Tehran has ramped up its nuclear activities in violation of the deal.

During a congressional hearing this month, Secretary of State Antony Blinken estimated that “hundreds” of sanctions — including ones imposed by the Trump administration — would remain if the United States reenters the nuclear deal, which seeks to limit Iran’s nuclear ambitions in return for sanctions relief. Blinken declined to say whether those that would remain include sanctions on Iran’s central bank and oil sector.

Earlier this month, the Biden administration removed sanctions on three former Iranian government officials and two companies tied to the country’s oil sector, in what was seen as a goodwill gesture ahead of a new round of nuclear negotiations. The State Department, however, described the sanctions removal as a routine administrative process.

Iran and the original signatories to the JCPOA wrapped up their sixth round of talks in Vienna on Sunday. On Wednesday, German Foreign Minister Heiko Maas cautioned that diplomats in the Austrian capital still have “several technical questions to resolve.”

"We are making progress but there are still some nuts to crack," he said during a joint news conference with Blinken.