Rouhani claims US has agreed to lift key Iran sanctions 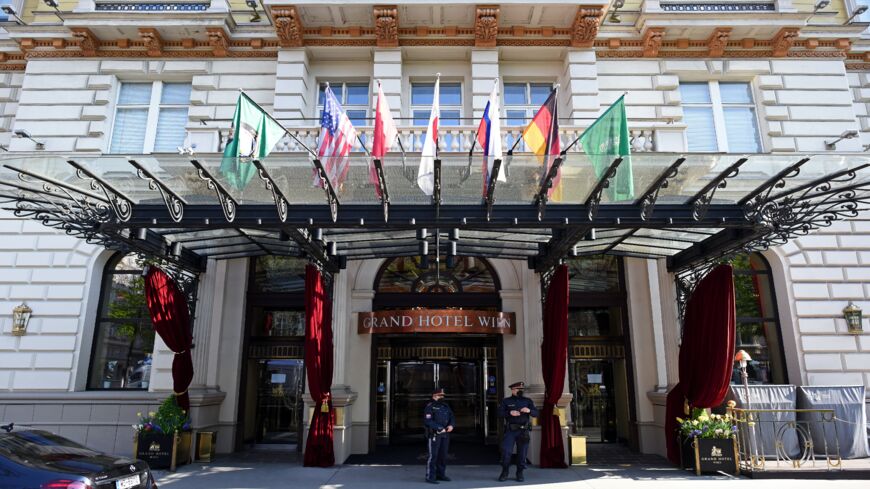 Police guard the Grand Hotel on the day the JCPOA Iran nuclear talks are to resume on April 27, 2021, in Vienna, Austria. Representatives from the United States, Iran, the European Union and other participants from the original Joint Comprehensive Plan of Action (JCPOA) are meeting both directly and indirectly over possibly reviving the plan. The JCPOA was the European-led initiative by which Iran agreed not to pursue a nuclear weapon in exchange for concessions, though the United States, under the administration of former US President Donald Trump, abandoned the deal and intensified sanctions against Iran. - Thomas Kronsteiner/Getty Images

President Hassan Rouhani declared that an agreement in principle has been reached with the United States under which Washington will remove a series of crippling sanctions against Tehran.

At a televised Cabinet meeting May 20, Rouhani said the relief will cover oil and petrochemical industries, shipping, insurance and banking sectors. The Iranian president noted there are only some details that need to be negotiated.

The comments came one day after Iranian negotiators concluded a fourth round of talks in Vienna with representatives from the United Kingdom, France, Russia, China and Germany. Nearly all the parties, including the EU representative — as the chairman of the meeting — signaled optimism toward a deal. The negotiators now return to their respective capitals for "final consultations" before clinching a final agreement.

The United States has been indirectly engaged in the talks, which are aimed at reviving the Iran nuclear deal, also known as the Joint Comprehensive Plan of Action (JCPOA). Washington demands that Tehran resume its full compliance with the JCPOA, including by terminating its 60%-level uranium enrichment. In return, Iran has been demanding a full removal of all sanctions that were reinstated after the former US administration walked away from the accord in 2018.

The path toward a revived deal has been bumpy, however. Iran has reportedly been insisting that sanctions targeting individuals and certain entities must also be lifted. Among those entities are the office of Iran's Supreme Leader Ayatollah Ali Khamenei and the Islamic Revolutionary Guards Corps (IRGC). During his May 20 speech, Rouhani did not specify if the United States has conceded to removing those contentious sanctions as well.

Prior to the launch of the new negotiations, Iran's supreme leader publicly set a tough condition for the Iranian negotiators: not to agree to anything less than complete removal of all sanctions. He has also stressed that Tehran will not return to JCPOA compliance before it has fully verified US sanctions relief.

The same line has been echoed louder by other hard-liners, including Iran's parliament, which appears more than determined to block a US-Iranian deal before the end of Rouhani's term in August. Only on Monday, over two-thirds of the lawmakers issued a statement reminding the president that, in their view, sanctions relief occurs only after "all the sanctions" are lifted.

Yet Rouhani's confidence about a deal around the corner could be a sign that Khamenei might have lowered the bar and modified his earlier, noncompromising approach by accepting some partial sanctions relief to save the battered economy instead of adhering to the full, ideal package he had aspired for.