Despite a moderate candidate doing well, the election debates have failed to generate enthusiasm. 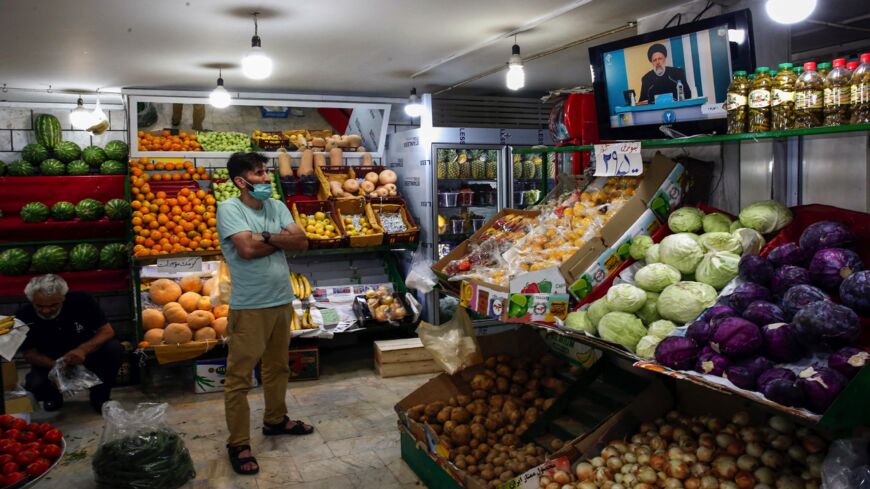 An Iranian man watches candidate Ebrahim Raisi speaking during the first televised debate between presidential candidates, at a fresh produce shop in the capital, Tehran, on June 5, 2021. - STR/AFP via Getty Images

Iran’s first election debate took place June 5. The topic of discussion was the economy. The seven approved candidates revealed very little new or surprising details regarding their party platforms. The conservative candidates insisted that focusing on domestic policies and capabilities was the key to improving the economy, while the moderate candidates claimed that settling the nuclear issue with the West would open up the country’s economy.

One standout from the debate was former central bank chief Abdolnaser Hemmati, who delivered a number of direct attacks on conservatives and spoke frankly about the nature of the debate. “I am standing opposed to five candidates,” Hemmati said, adding that his actual rival in the election is current Judiciary Chief Ebrahim Raisi, referring to the other conservative candidates as a “cover.” He said if the other candidates expect him to answer all of their attacks, they have to vow to remain in the election until the very end.

Hemmati’s criticism was a direct attack on the election process in which he is serving as a stand-in for the Hassan Rouhani administration while the other conservatives attack him, allowing Raisi to play as if he is above the partisan bickering.

With the election less than two weeks away, Iranian officials have to ensure a high turnout. Polling has shown that Iran expects a lower turnout than in previous years. The country has endured nearly 10 years of crippling US sanctions while also fighting the pandemic. The list of qualified candidates to run remains limited, with Reformists having no official candidates in the election. Iran’s deep state has thrown its weight behind Raisi, who not only has a tainted history in Iran’s judiciary but also lacks charisma and a stage presence.

In order to push for a higher turnout, Iranian media has highlighted Supreme Leader Ayatollah Ali Khamenei’s website in which an individual asked a question about leaving a name blank on the voting ballot. The answer was, “In any situation, if leaving a ballot blank weakens the Islamic system, then it is forbidden.” Iranian clerics have websites in which their followers can ask for religious rulings on topics ranging from serious matters to the mundane. The answers, given that they are on the clerics' websites, are considered fatwas.

In a June 4 speech, Khamenei quoted the founder of the Islamic Republic of Iran, Ruhollah Khomeini, when he said that not participating in the election is a “great sin.” Javan online, which is close to the Islamic Revolutionary Guard Corps (IRGC), also highlighted a number of tweets by individuals pushing for people to vote.

Regardless of the turnout, it seems clear just by coverage alone that Raisi is favored by hard-line media. Tasnim News Agency, which is close to the IRGC, has run multiple pieces about him as their top stories.