Peoples' Democratic Party deputy Garo Paylan brushed aside the gunman’s claims that his was a lone wolf attack, citing gun-toting photos of the 27-year-old attacker in Syria posted on social media. 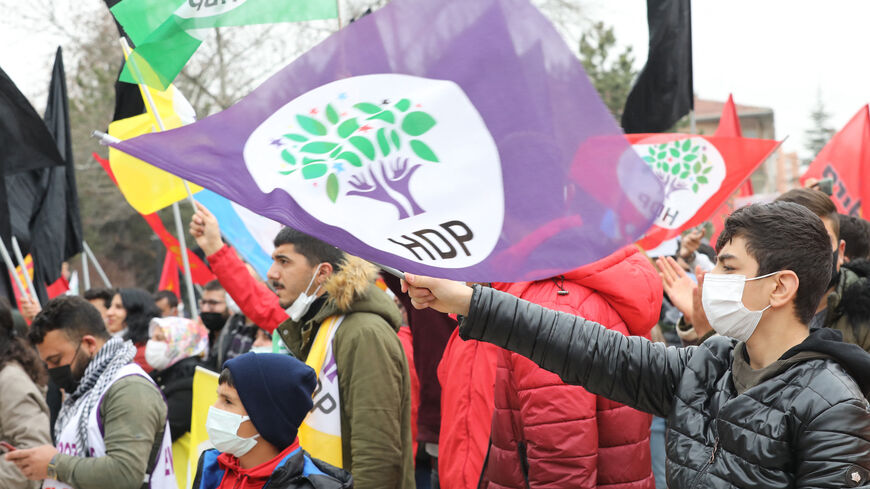 A boy waves a flag as supporters of Pro-Kurdish People's Democratic Party shout slogans during a rally as part of Nowruz (Newroz), or Kurdish New Year, celebrations in Ankara, on March 21, 2021. - ADEM ALTAN/AFP via Getty Images

IZMIR, Turkey — A gunman attacked the headquarters of the pro-Kurdish Peoples' Democratic Party (HDP) in Izmir, the third-largest city of Turkey, June 17, killing a 38-year-old volunteer.

The gunman’s initial statement said that he acted alone, but several opposition politicians demanded further inquiry into his ties, particularly after his Instagram account showed him toting guns in Manbij, Syria. HDP members also accused the government of making the party a target with repetitive accusations that HDP was a threat to national security.

“This was an attack that was coming,” HDP co-chair Mithat Sancar said at a press conference in Ankara. “This government feeds on chaos and tries to stifle the opposition, particularly the HDP, through all means. Those who have not dealt with us through legal and political means have now mobilized their killers. The government has put its chaos plans into action.”

He added that the attack could have become a massacre if the HDP had not decided at the last minute to postpone a meeting of 40 local chairs scheduled for the morning.

The HDP, Turkey’s third-largest party with 55 seats in the 583-strong parliament, is under threat of closure after a top prosecutor refiled an indictment earlier this month to ban nearly 500 of its members from political office on terror-related charges. The legal move is coupled with growing political pressure from the ruling Justice and Development Party (AKP) and its ally the Nationalist Movement Party (MHP), which repeatedly link the HDP to the outlawed Kurdistan Workers Party. MHP chair Devlet Bahceli said June 8 that the Constitutional Court had a moral duty to ensure that the HDP would be wiped from the political landscape of Turkey, never to return under another name.

The party’s Izmir deputy Serpil Kemalbay told Al-Monitor that they had warned the local police that they needed better protection, particularly after anti-Kurdish demonstrations in front of the building earlier this month.

She said that the gunman entered the party offices at 10:30, when Deniz Poyraz was there alone. “She was there to tell us that her mother, who is our regular office worker, would not come on that day,” Kemalbay told Al-Monitor. “I was on my way to the office.”

The gunman shot Poyraz, then fired shots at the doors of the locked offices and tried to start a fire before he was stopped by the police, she said.

Poyraz’ mother, Fehime, sat in front of the building under a makeshift poster of her daughter with a large crowd offering condolences. “I was not allowed to see her as they took her away,” she told Al-Monitor. “But I am proud, proud that my Deniz is a martyr.”

She had named her daughter after Deniz Gezmis, a Marxist-Leninist student leader in the 1960s who was executed, she said.

According to a statement from the Izmir governor’s office, the attacker was 27-year-old O.G. — later revealed as Onur Gencer — a health care worker who had recently resigned from his job.

“I am not with any organization. I staged the attack because I hate the Kurdistan Workers Party and have been plotting an attack on them since I was a kid,” Gencer said in his statement to the police. He said that he had been to Manbij as a health care worker in 2020.

But opposition politicians, both from the HDP and the main opposition Republican People’s Party (CHP), said it was impossible to believe that this man who arrived in the office heavily armed had no connections.

“The Instagram photos — a man carrying an M-16 at a camp claimed to be in Syria and making the [Gray Wolves] sign — indicate that this man was trained at an incubation center,” Garo Paylan, the HDP deputy of Diyarbakir, told HalkTV.

“This is a fascist attack,” CHP Izmir deputy Murat Bakan said on HalkTV. “It indicates the presence of an illicit, paramilitary formation. … There are many rumors and all of them should be very carefully investigated. Remember the murder of Hrant Dink [the Armenian-Turkish journalist killed in 2007], which was initially presented as a lone wolf crime by a 19-year-old but later revealed a dark web that touched the depths of the state.”

Bahceli denied that the gunman had any links to the MHP. “No one has the right to accuse the MHP or try to tie a criminal to us because of a hand gesture,” he tweeted, claiming that the photos looked staged.

While the CHP, the Iyi Parti and the AKP offered condolences to the HDP, there has not been any statement from the government so far. Interior Minister Suleyman Soylu was conspicuously silent at a meeting with governors.

But Soylu’s nemesis Sedat Peker, a fugitive mobster who has been implicating AKP members and cronies in myriad crimes, would not keep quiet. “My dear friends, unfortunately, in the coming days, we will experience much bigger attacks than this provocative attack on the HDP’s Izmir offices,” he said, calling on supporters of the party “not to go on the streets under any circumstances.”