The Gaza Strip's bomb squad is working with severely limited resources to neutralize the deadly ordnance left behind after the latest Israel-Gaza fighting. 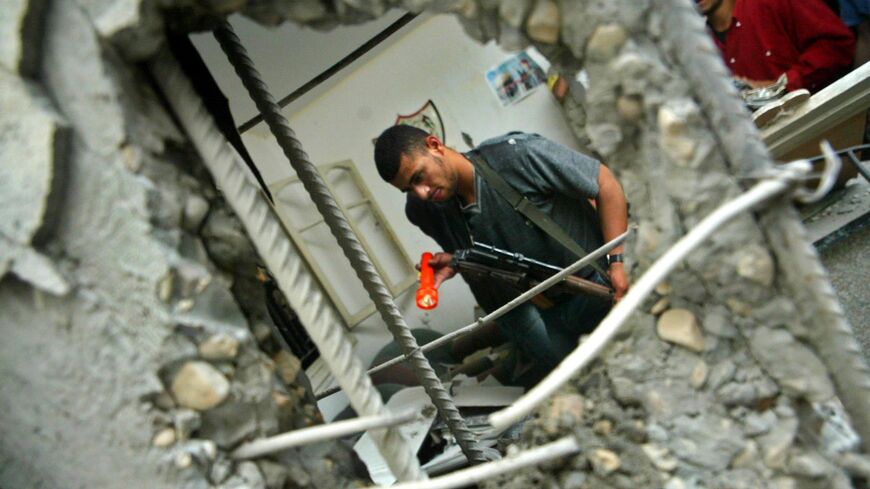 Palestinian bomb squad police officers search for pieces of Israeli missiles in the rubble of the office of the Democratic Front for the Liberation of Palestine following an Israeli airstrike on May 17, 2004, in Gaza City. - Getty Images

On May 21, Israel and Hamas reached a cease-fire agreement, after the escalation that erupted on May 10.

Miqdad explained that the explosives included artillery shells, smoke shells, guided missiles and bombs. According to the Environmental and Water Quality Authority in Gaza, Israel dropped 700 tons of explosives during the recent fighting, leaving 275,000 tons of rubble behind.

“Israel targeted our headquarters and destroyed it completely and we lost the scarce equipment that we had, but we did not stop working,” Miqdad stressed.

He noted that the 70-member squad was able to complete 80% of its work and the remaining 20% consists of explosives that penetrated reinforced concrete and require greater capabilities and equipment. He said the squad needs help from private companies and various government agencies to excavate and neutralize, transport and dispose of underground unexploded ordnance.

“We are waiting for the United Nations to approve [funding to] dispose of these explosives because it is a costly process,” he said.

Miqdad pointed out that Israel has bombed the enclave from the air many times. Its most used explosive is the US-made MK-84, whose updated the guidance system has made it highly accurate. Regardless of this precision, Israel tends to rain massive quantities of missiles on a target.

Al Jazeera reported May 17 that Israel used US-made BU-31 and GBU-39 bombs that are internationally prohibited.

Meanwhile, the bomb squad has to rely on its expertise alone to neutralize explosives, as Israel prevents the entry of equipment such as protective vests, helmets, shields and the metal detectors needed to search large areas.

Israel also prevents the entry of remotely controlled robots and water cannons, which are used to disable bombs, in addition to the four-wheel-drive vehicles needed for transporting ammunition, Miqdad said, noting that dangerous materials have to transported in regular trucks.

He explained that the squad has worked with simple equipment and tools that it was formed in 1996 under the Palestinian Authority, which governed Gaza back then.

Miqdad said the Red Cross supports the squad by providing simple equipment such as screwdrivers, boxes and drills, which are already available in Gaza. He called on international committees and institutions to support the work of the bomb squad and provide it with the necessary equipment.

“We rely on our technical staff in the absence of equipment,” he lamented.

He noted that the squad members have been trained by local and international experts including the United Nations Mine Action Service. Others received extensive training in Sudan in 2012 and 2013.

On June 2, two Hamas members died while they were defusing unexploded ordnance left over from the Israeli bombardment on Gaza, at a site belonging to Izz ad-Din al-Qassam Brigades in the central Gaza Strip.

Miqdad said that the squad is not aware of the details of this incident, since it does not handle explosives that fall on the military sites of the resistance factions. The squad does not enter them unless its help is requested.

He stressed that the squad does not hesitate to do its job and adheres to protocols to keep it safe, noting that while no squad members died during the recent escalation, 20 members have been killed since the squad was first formed.

He explained that the explosives disposal process involves sorting and transporting the ordnance in to large warehouses set up in uninhabited areas in the south in cooperation with the International Committee of the Red Cross.

Ibrahim Habib, a professor of national security at the Rabat University College in Gaza, told Al-Monitor that the Palestinian resistance uses all available materials to develop its military capabilities, including recycling Israeli explosives and missiles that fall on its sites.

“It also made use of two British warships submerged in the sea from the British Mandate era that were discovered on Deir al-Balah beach in central Gaza,” he added.

Habib explained that the armed resistance factions are working to manufacture weapons locally. While they can’t make use of the technology in the missiles that fall on their sites, they do recover explosive materials from them.