EU leaders propose further funding to Turkey for Syrian refugees, but, at Greece’s insistence, issue a warning that the bloc “condemns any attempt by third countries to instrumentalize migrants for political purposes.” 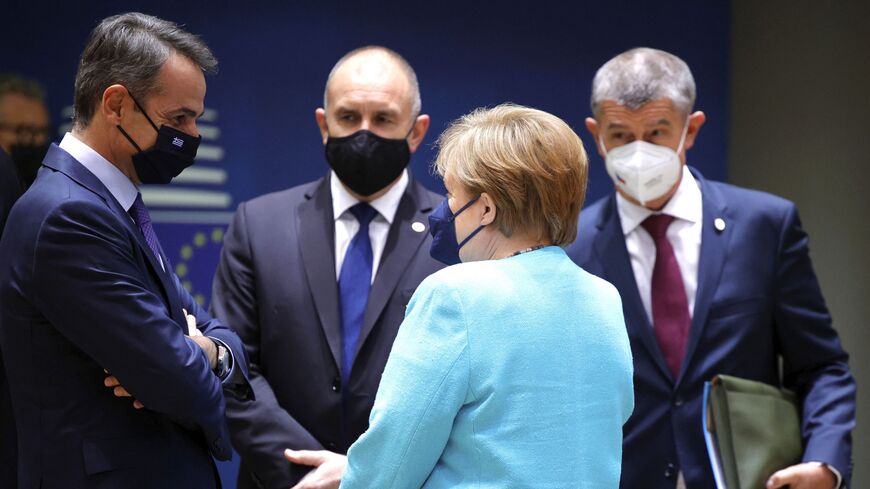 Top European Union leaders agreed in principle June 24 on a new financial package for Turkey for hosting refugees and taking back migrants from Greece while also warning against “instrumentalization of migrants for political purposes.”

The 3.5 billion euros (nearly $4.2 billion) for Turkey would be part of a larger aid package that aims to continue to stop migrants from reaching the EU. It also would earmark 2.2 billion euros ($2.6 billion) for Lebanon and Jordan, according to a working document prepared by the European Commission for the two-day European Council summit of the 27 EU leaders in Brussels. UN Secretary-General Antonio Guterres also attended.

Turkey hosts nearly 3.7 million Syrian refugees, while Lebanon has 855,000 and Jordan nearly 667,000, according to the UN High Commissioner for Refugees.

A summit statement said, "The European Council calls on the Commission to put forward without delay formal proposals for the continuation of financing for Syrian refugees and host communities in Turkey, Jordan, Lebanon and other parts of the region."

The commission is expected to submit the formal package to the European Council by September. Because the monies would come out the EU's common budget, they will have to be approved by the European Parliament. This in turn could cause some issues for Turkey, which was criticized by the European Parliament in May for backsliding on the rule of law and fundamental rights and for pursuing a confrontational and hostile foreign policy in the eastern Mediterranean. The parliamentarians recommended the formal suspension of accession talks with Turkey if this trend continues. The European Council conclusions also expressed concern about “rule of law and fundamental rights.”

The new package would replace the 2016 EU-Turkey Statement, under which the EU committed 6 billion euros ($7.15 billion) to help Ankara stop irregular migration from Turkey to the EU. Though the accord has succeeded in its original aim of reducing the number of migrants crossing the Aegean Sea, Turkey has bitterly complained that it has only received half of the funds promised and that the European Union’s promise of visa liberalization, one of the pillars of the accord, has not materialized. The EU member states, on the other hand, accuse Turkish President Recep Tayyip Erdogan of using Syrian refugees as political pawns, particularly after Turkey decided to open its border for refugees to cross into Europe in February 2020.

“We recognize the important role that Turkey has to play in halting the migration flows,” Greek Prime Minister Kyriakos Mitsotakis said ahead of the summit. “We are not at all opposed to additional funding, but under two conditions, which Turkey must strictly adhere to. The first is the avoidance of any instrumentalization of refugees and migrants and the second is the acceptance of the return to Turkey of people who are currently on the Greek islands and whose asylum applications have been rejected.”

Greece’s insistence on having these conditions included in the text delayed the final conclusions, Brussels sources told Al-Monitor.

In the end, the EU leaders said the bloc “condemns and rejects any attempt by third countries to instrumentalize migrants for political purposes,” without explicitly naming Turkey. This also would apply to Morocco, which has intentionally loosened its border controls over a political dispute with Spain last month, causing the entry of 8,000 migrants into Spain’s North African enclave of Ceuta.

“This wording is not surprising as the EU members have expressed similar views before,” Kader Sevinc, a senior EU expert and the opposition Republican People’s Party representative to the EU, told Al-Monitor. “At this point, it is a common stance. We will need to see whether it will be translated into concrete action in the final deal.”

Ankara, despite its jittery finances, is unlikely to focus on the size of the package. On the contrary, Erdogan often pooh-poohs the EU funds as nothing more than a Band-Aid. Right after his decision to open the borders to the refugees, Erdogan said the EU had “offered 1 billion euros” but that he had rejected it. “We already spent 40 [billion] euros on the refugees,” he said. “We’d find the 1 billion ourselves.”

Nilgun Arisan Eralp, the director of the Center of European Union Studies at the Economic Policy Research Foundation of Turkey, told Al-Monitor, “Ankara was hoping that the new package would give Turkey more control over the funds from the EU.” She added, “But this is impossible, due to the EU’s own legal framework, which can only fund specific projects, rather than hand a blank check to the government.”

Right before the summit, Turkish Foreign Minister Mevlut Cavusoglu and EU foreign policy chief Josep Borrell came together to discuss migration, visa liberalization and Turkey-EU ties. Cavusoglu said the EU must “return to the table” on negotiations with Turkey.

Earlier June 24, German Chancellor Angela Merkel told the German parliament, “We should now — as we already agreed in March — swiftly implement the dialogue agenda with Turkey in order to advance our cooperation in areas of common interests. This includes making progress in our talks on modernizing the customs union.”

She said the topics of health, climate protection and the fight against terrorism should also be taken up — echoing the conclusions of the EU leaders’ summit in March.

The European Council said it “welcomes the continued de-escalation in the Eastern Mediterranean” and “takes note of the preparatory work for high level dialogues on issues of mutual interest, such as public health, climate, counterterrorism and regional issues.”

The EU leaders also took note of "the start of work at technical level towards a mandate for the modernization of the Turkey-EU Customs Union" and asked Turkey to ensure the trade deal's effective application to "all member states."

Arisan, however, was skeptical about the customs union modernization. “There is a conditionality on the revision of the customs union,” she said. “The bloc is asking Turkey to extend the customs union to all existing members, which means opening its ports and airports to Cyprus, which Turkey does not recognize.”